After James von Brunn went beserk inside the Holocaust Memorial Museum last week, several articles referenced the gunman's contentious email correspondence with novelist Tom Clancy. Reading the accounts of von Brunn and his .22 caliber, I wondered--as most of us do in the wake of an atrocity--what the hell makes someone do something like that. And also, how did a bestselling thriller writer get sucked into the conversation?

As a thriller writer myself, it is my job to dream of mayhem. I suppose it's the job of any author of crime fiction--to see the loose screw on the airplane, the off-kilter gas truck, the meticulously groomed gentleman in line at the post office whose jacket is bulky and his smile screwed on a little too tight. These thoughts were never unsettling to me. That's how my brain works, and these scenarios can be delightful places to pass the time when I'm under the dentist's drill or waiting for a train. But is there a responsibility that we have, as creators of fictional destruction, to our readers and to the public at large? And by this I mean a responsibility beyond crafting a compelling story? A responsibility not to give ideas to people who might imitate or emulate the violence we set down in print?

My answer would be: No.

I've yet to source the quotation, so it may be apocryphal, but Stephen King (a favorite of mine and just about everyone else's) once cracked wise about killers who draw their inspiration from novels. He (perhaps) remarked that authors should sue for plagiarism. Flippancy is an underrated tool when parrying idiocy. In all the tired discussions about media influence and violence, I've not once heard someone remark, "If I'd seen that movie/read that book/played that video game, I would have gone out and killed someone as a result." No, the good-hearted concern is always, charitably, for others. Youth. The mentally ill. Folks of lower IQ who breath through their mouths. Them's the ones who'll get whipped into a froth-mouthed frenzy after a viewing of A Clockwork Orange and want to cane-smash oldies to the strains of the Ninth.

I won't say that certain events don't give me pause. I've noticed that after 9/11 and having kids and perhaps even leaving my twenties and thereby outgrowing immortality, I've been more judicious in my use of written violence. It's more real to me and I tend to shy from its superfluous use in my novels (this acquired sensitivity has yet to extend to my comic-book writing). More violence in my books takes place "off camera." But this has been due to my natural education as a human and a writer, not because of fear that a scene of mine will prove the straw that breaks some citizen's sanity.

And yet time has proven that psychos model behavior from books and movies. A few weeks ago in the UK, a knifeman inspired by The Shining lured two paramedics to his flat where he attempted to slash them up, Jack Nicholson style. The Telegraph reports, "They...cowered in fear of their lives as the 45-year-old repeatedly plunged the blade through the door while shouting [the] famous line 'Here's Johnny!'" (Talk about Anxiety of Influence). 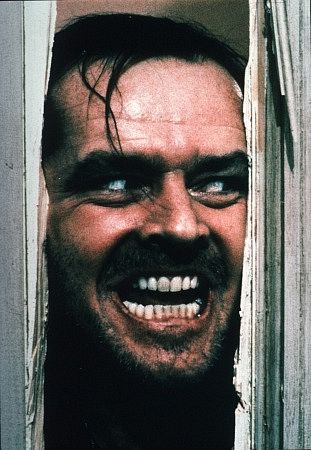 Oldboy is one of my favorite films, a South Korean thriller, and--some have claimed--a piece of the inspiration behind the Virginia Tech mass murder (Cho Seung-Hui filmed himself enacting several poses from the film on the day of the murders).

Fallout from that horrific day reignited debate over whether violence in entertainment leads to real-life violence. But the notion that a film or book would be the impetus to a mass murder (rather than merely providing sick-minded stylistic flourishes) seems to me inane. Does anyone among you believe that you shouldn't see Oldboy in case you suddenly feel compelled to murder thirty-three innocents?

One of my favorite lines on this topic was delivered by A.M. Homes. Her brilliant novel, The End of Alice, depicts a girl being stabbed to death. When asked by a reviewer how she would feel if her book was found in the house of someone who murdered a child, Homes replied, "That's like asking somebody who makes steak knives how they would feel if their knife was found in the home of someone who murdered someone."

Are we to believe, if we regard the constellation of illnesses and influences that turned Seung-Hui into a mass murderer, that Oldboy was a major one? Or even the precipitating factor? Clearly not.

But there is another related topic at hand here beyond the issue of simple influence. How about pop-culture consumers who are already looking for knowledge to bring to bear on some criminal act? While I don't believe that stories cause someone to commit violence, I do believe that as a creator, I have a responsibility not to provide a game plan for criminals shopping for information.

One of my duties as a storyteller is to come up with fresh and compelling premises. And so often I find myself digging around for something--some bit of horrific potential--that hasn't been used before. My latest thriller, Trust No One, opens with a SWAT team bursting into the apartment of my everyman protagonist, Nick Horrigan. Half-naked, he is grabbed from bed and dragged to a waiting helicopter. A terrorist has seized control of the nuclear power plant at San Onofre. And the only person he'll talk to is Nick.

But here's the worse news. The terrorist has targeted not the reactors, which are ostensibly reinforced to sustain damage from an airplane crash. But rather he has targeted the spent-fuel ponds. Few people know about these, and this is why I plucked the idea from my research. (How weary are we of the suitcase bomb, the airborne virus, the serial killer who lives in mom's basement?) Spent-fuel rods are stored in high-density water, and some of these pools house ten times more long-lived high-penetrating radioactivity than a nuclear plant's reactor core. A single pool can hold more cesium 137 than has been deposited by every atmospheric nuclear test ever conducted in this hemisphere. And here's the kicker: these spent-fuel pools are far less guarded than the reactors, and multiple reports have been issued pleading with the government to shore up security around these sites. These are all harsh truths. In writing about this significant and relatively unknown hazard, I am laying bare this vulnerability to anyone with access to a bookstore or library. The same argument can be made that is often leveled against types of investigative journalism; in bringing a national security issue to light (and here for mere--ptooey--entertainment), one is trumpeting said tune not only to the authorities and responsible citizenry, but also to men in caves in that rugged border region.

So here's how I sleep at night. Part of my job, as I see it, is to streamline my stories. Pacing is key. I don't get into every specific; I pick and choose only what's relevant, interesting, and, well, cool. I have little interest in producing a narrative version of The Anarchist's Cookbook, nor is it in the interest of my story for me to lay out extensive instructions, recipes, and blueprints. The research I undertake forms the portion of the iceberg beneath the surface; what bits make it into the novel are only that tip poking up into view. My research had been substantial; I've flown in stunt planes, blown up cars on demolition ranges, and gone undercover into mind-control cults. I rely quite often on experts who range from criminalists to former spies to Navy SEALs, and one of the inviolable aspects of any of those relationships is my respect for when a consultant needs to go off the record. Nothing I'm told off the record makes it into print. A lot of good comes out of brainstorming, and I've found that experts do well to sort through various scenarios in order to help me find some real-world detail to match the plot point to which I'm trying to lend that ring of verisimilitude. They often need the freedom to run through a range of ideas to explain a point, and they'll do so only if at the end, they can backtrack and take a few off the table. A demolition breacher friend has helped me design many an explosive and when we've worked it all out, we go back and change an element. Or three. I get a few emails from know-it-all separatists about flaws in my bomb design, but after all, what doesn't bother those folks?

Likewise for my spent-fuel pond. It exists, sure. But the design, location, placement in a facility, and surrounding security? Well, those are anyone's guess. After all, those elements don't drive the narrative any more than ones that I can dream up.