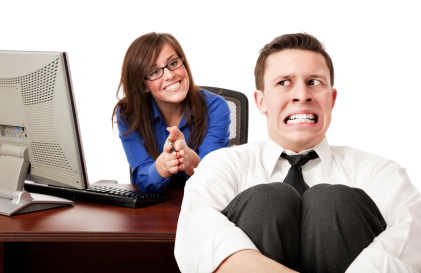 If you're someone who's prone to anxiety to begin with -- or even if you're not, but faced with a situation at work that looks unclear or uncertain -- you know that it can be hard deciding what to do; which decision will have the best outcome.

Now, some interesting new research shows how and why that happens. Most importantly, it reveals why your anxiety is likely to lead you into making bad decisions, which often reflect a misperception of what the reality of your situation truly is. This is very relevant to your role, whether you're a senior leader or in any position in your organization -- whenever you're faced with decisions and choices involving your responsibilities, your team collaboration; or conflicts with superiors or subordinates.

This new study from researchers at Berkeley and Oxford focused on how people respond to situations of unpredictability. Those are likely to raise some degree of conflict and turmoil for most people. The researchers found that those who are prone to high anxiety in such situations have a more difficult time than others when attempting to read the environmental cues -- a grasp of the whole situation -- that could help them avoid a bad outcome to a decision they have to make. More broadly, they found that the more anxious people have greater trouble deciding how best to deal with uncertainties in life, in general.

According to the press release, lead author Sonia Bishop said, "Our results show that anxiety may be linked to difficulty in using information about whether the situations we face daily, including relationship dynamics, are stable or not, and deciding how to react."

This suggests that the more anxious person at work tends to have difficulty making good decisions in his or her personal life, as well, when faced with an ambiguous or uncertain event or situation. "It's a bit like being Alice in Wonderland, trying to work out if the same rules apply or if everything is different and if so, what choices you should make," Bishop added.

I've seen many examples of how this plays out in workplace situations, such as when a person's anxiety leads to misperceiving the reason he was excluded from a meeting about a project that he's involved in; and then he acts on that misperception with behavior that creates a problem for the outcome of the project. Or, someone whose boss wants to discuss her long-term career goals. Her anxiety leads to suspicion that this is prelude to being fired or demoted. Then, she speaks about her goals in ways that look as though she's thinking about options outside the company; has one foot out the door already. She later learns that her boss wanted to explore the possibility of her growth within the company.

The researchers gave an example from their study in which a friend might suddenly lash out for no discernible reason. It's possible that your friend's behavior might simply reflect a typical variation in their day-to-day mood or interactions. That is, it might be a feature of their personality. Or, it could be a stress reaction that has little to do with you. On the other hand, the friend's lashing out it might also reflect an underlying change in their relationship with you. Although these examples from the research relate to personal interactions, the same situations can arise at work, as well.

The researchers point out that if you're prone to high anxiety, your challenge is making the right assessment of the situation, in the context of the relationships, and in view of what else may have happened recently. The researchers explained that you need such a perspective in order to respond appropriately. That is, the highly anxious person is more likely to misperceive and act in a way that has an undesired outcome. The study, published in Nature Neuroscience, also found that highly anxious people tend to catastrophize unclear or uncertain situations, as well. And that can lead to poor judgment and regrettable behavior, as in the example above, in which the person hears a potential change in the workplace as a career threat.

As Bishop noted, "An important skill in everyday decision-making is the ability to judge whether an unexpected bad outcome is a chance event or something likely to re-occur if the action that led to the outcome is repeated."

These findings are relevant to everyone in their career roles, but perhaps have greatest significance for those in high-impact decision making positions, whose judgment and decisions affect the organization's success. Moreover, I think this research adds to the accumulating evidence that our emotions, thought processes and behavior are highly intertwined; and that linkage underscores the value of meditative practice. Increasing numbers of studies find that meditation enhances our capacities to regulate and diminish stress, anxiety and depression. It modifies the brain structures associated with expression of those emotions. So -- whatever your position is in your organization, meditate to diminish your anxiety and go forth with better decision-making resources!