Much as my kids hated me doing it, I decided to talk to my daughters' friends about their views on Amendment 2. 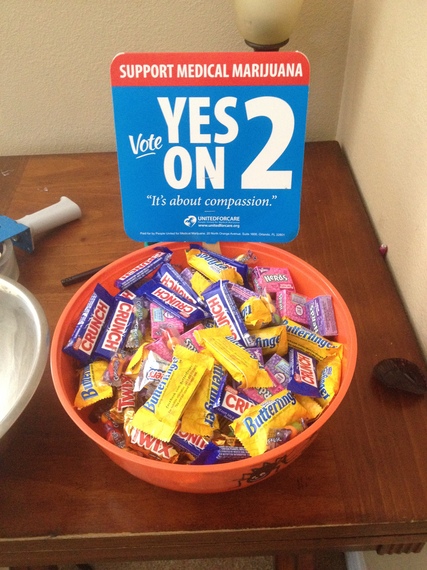 My youngest daughter is a sophomore in high school and my middle one is a college freshman, so talking to their friends gave me a sample of ages and views. My kids pride themselves in having a diverse group of friends that include a multitude of nationalities, ethnicities, races and sexual orientations. Some already smoke cannabis, some drink (underage), some are considering and some are sure they have no need for it. But they do understand that some people really, really do.

For the benefit of the people interviewed, I promised to use first names (and not always real first names) and no pictures. "The stigma is still so great out there, that even doing something like this to benefit people might affect our jobs," Ali said. "That's the great thing about voting -- until this is legal and the stigma is lifted, I can still vote confidentially and do what's right."

Ray, a 17-year-old from Pasco County, stated, "I've seen the ads showing kids with a joint and a cloud of smoke, and I have to ask myself, 'what has that got to do with Amendment 2?' Kids don't smoke it for medicinal purposes. I've never seen any of my friends who smoke seek out some pot because they need it for some terrible disease. They get it for the same reason they get alcohol, to get a buzz."

Kaeden, a friend of Ray's chimes in, "The only difference is that, once I'm 21, it will be legal for me to drink, but I have a feeling recreational pot will still be illegal. So it will be much easier for me to get a six pack of Bud then a bag full of 'bud.'"

Kevin, a USF student, feels that the ads question his intelligence. "Why do they think that we can't figure out that this is for cannabis use as medicine? Do the "Say No on 2" folks think we're that stupid? Even my stoner friends know that this is about medicinal marijuana. They also know that they don't have to vote on 2 to get recreational pot. They're already getting it."

Cheryl, Kevin's friend interjects, "Of course, the black market has its problems. Most of the time, you really don't know what you're getting. Unless you have a friend growing it for you, you have to take their word for it."

Kaitlin, a 20-year-old student added, "the only way marijuana is a gateway drug is because, when you have to get it from the black market, you deal with folks who always try to sell you something else, like prescription drugs, designer drugs like ecstasy, coke, you name it."

Alex, Kaitlin's friend, noted, "I know a guy who really needs it. He got into a car accident a few years ago and had a nasty brain injury. He gets these seizures once and a while and some really nasty headaches. The meds the doctors are giving him are messing him up even more. Sometimes he looks totally zoned out. I got him some edibles once, and he had a great day, he looked better that he had for a while. He told me that he also got the best sleep he had in a long time, and aced his midterms."

Jorge, a political science major, noted, "They keep talking about loopholes in the amendment that will let kids get weed, and that the rules will be so fast and loose that anyone will be able to get it, including 12 year olds.

"Really? Have they not seen the type of bills and rules and regulations that come out of the Legislature and state governmental agencies? Calling them conservative is an understatement. There's no way in hell that this will become a law like California. If you vote for a staunch conservative for your representative or senator, ya' got to believe they will make regulations tighter than any other state."

Lauren, 18, is a first-time voter. "I have a lot of friends who didn't even register to vote, and that really pissed me off. All you have to do is check a damn box when you get your (driver's) license. I think that it is so cool that I not only get to vote, but that I get to vote on something that will really make a difference in people's lives who are ill or in immense pain without even costing the taxpayers any money. It will actually bring in tax dollars for our state to use on education. It's a win-win!"

Matthew, also 18, laughed and said, "Except for the folks who make money off of arrests and prisons. I think they are scared about this passing."

There were one or two kids who feel that this may lead to recreational marijuana, but they were in the vast minority.

One 21-year-old FSU student told me, "If it happens, it's not going to happen until there's some kind of change in the federal law, and not for a good long time from now. But the folks who need pot as medicine need it now, not years from now. That's why voting yes on 2 is so the right thing to do."

So many folks think that the youth just don't get it. After actually talking with some of them, I know they do.

Let's just hope that the kids who get it, vote. And bring their friends to the polls, too.

Gary Stein, MPH, a native Detroiter, worked for the Centers for Disease Control, landed in the Tampa Bay area to work for the State Tobacco program and is now a health advocate and activist and blogger for the Huffington Post. Column courtesy of Context Florida.