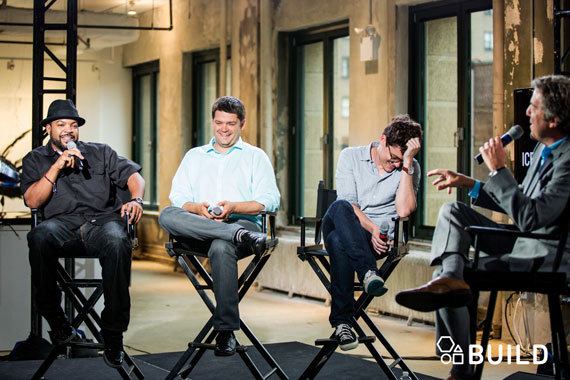 "He gave me permission to call him Cube." - That alone set the tone for the latest AOL BUILD Speakers Series segment welcoming 22 Jump Street directors, Phil Lord and Christopher Miller as well as our favorite rapper, painter, producer, actor and all around 'badass motherfu****' Ice Cube to #AOLBUILD.

The trio discussed the inner workings of the new record-breaking sequel to 21 Jump Street, which amazingly only counts as one of their many career accomplishments.

For the dynamic-duo of Lord and Miller so far, it's been so good. The Lego Movie creators opened up about their quest for creativity, the secret behind their collaboration and the challenges in producing the franchise. They candidly admitted that their pitch for the first Jump Street was laughingly simple: "What if the twist is ... it's good?"

And good is a mission accomplished, as Ice Cube delved into the experience of working with the two directors as well as his own personal passion projects. Ice Cube contested that the key to longevity is to always remain creative in any and every field. Cube's advice is as effective as his approach: "May the best argument win."

For more on Ice Cube, and how he feels about being called "cuddly,"check out the full AOL BUILD segment below.