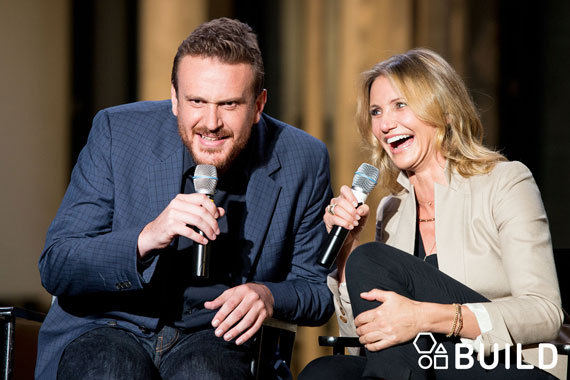 Imagine a funny and beautiful Cameron Diaz married to the knee-slapping hilarious Jason Segel making a Sex Tape, and having it all go very wrong. What more could you want out of the summer's hottest movie? NOTHING, except maybe some more info on the Cloud, because, let's be honest, who really knows what the Cloud is anyway. Cameron Diaz doesn't feel safe, and neither do we.

The AOL BUILD Speaker Series takes an educated guess with this trio telling us everything we need to know about making a sex tape--from their incredible collaboration to the shameless 24/7 sex scenes-real or not, their comedic chemistry and experience on set, including Jason's superhero ambitions and professional puppeteer aspirations.

Watch the full AOL BUILD segment below to find out how Cameron Diaz pried Jason Segel away from a pound of unsalted nuts, and changed his life for the better.

AOL BUILD
AOL's speaker series, BUILD, is about sharing perspective, opinions, ideas and expertise form the outside in and inside out.