Sixty-seven years ago today, the German army surrendered to the Allied Forces in a little schoolhouse in Rheims, France. The news that the war was over was broken by the Germans in a broadcast between surrender signings in France and Germany. The first American reporter to break the historic news was Associated Press correspondent Edward Kennedy, who defied military censors and an embargo on the news to which he had agreed.

For his act, Kennedy was fired by the AP. Almost seven decades later, the AP chief, Tom Curley, has issued a posthumous apology to Kennedy and his family to coincide with the publishing of Kennedy's memoir by his daughter.

One of the reporters who was subject to the same embargo Kennedy signed was my father, Stars and Stripes reporter Charles Kiley. Gen. Dwight Eisenhower had appointed him the worldwide pool reporter for the surrender negotiations. For more than 20 hours, my father chronicled the back and forth between German high command and Eisenhower's senior staff, culminating with the actual surrender signing at 2:41 AM.

He was the only reporter on the scene until the signing ceremony. Kennedy and other reporters agreed to the embargo aboard a military aircraft that was bringing them to Rheims. Kennedy and the other reporters were given my father's pool report on the negotiations upon their arrival for the dispatches they would soon write.

The reporters were compelled to hold the official news until the Germans also surrendered to the Russians in Berlin, which would take place on May 8. The AP reported this week that the second surrender in Berlin was being "staged" for political reasons. Tell that to the 11 million Russian soldiers and 6.7 million civilians who were killed by German forces. That is a casualty count that out-numbers the number of American and British soldiers, plus the number of Jews killed in concentration camps. The Russian high command was not in Rheims, and would not accept surrender until the Germans did so in Berlin.

Until the Berlin surrender was completed, Truman, Eisenhower, Churchill, and other leaders would not officially acknowledge the Germman surrender and the end of the war. Were politics with Russia involved? Sure. But let's not lose sight of the fact that the Russians deserved their day.

Was the holding of the news ill-conceived? Sure. The obvious reason to get the news out was so that all sides stopped shooting. Moreover, the news was, in fact, spreading, because of a German radio broadcast on the morning of May 7.

I can only imagine the frustration felt by Kennedy. And my father understood it, because he felt it too. I heard first-hand accounts of the incident from my father, who died in 2011. (Kennedy was killed in an auto accident in 1963.)

My father did not leave his feelings about the incident behind in the form of a memoir. But he was one of 54 reporters, including the sixteen who maintained the embargo, who signed a protest over the fact that Kennedy defied the military censors by filing the news of the surrender before the Berlin surrender, which my father also covered for Stars and Stripes.

We discussed the events several times, and I can sum up his feelings this way: As a reporter, he understood Kennedy's actions, but didn't agree with him.

Though working for the military newspaper, my father was no stenographer. He was 31 years old, and had been a sports writer for the Jersey Journal in Jersey City, N.J. He covered some of the biggest sports stories of the century, like the Joe Louis-Max Schmeling fight, Lou Gehrig's Yankee teams and his retirement day in Yankee Stadium. He did, in fact, enter the war as a draftee rifle carrier in the Army infantry, not as a reporter. But in 1942, before his unit was deployed to North Africa, he was requested by the Stars and Stripes to report to London when the paper went from being a weekly to a daily and needed additional qualified reporters. He worked with Andy Rooney with whom he was a life-long pal.

By the end of the war, my father had logged three years on the paper. He had established the first Continental edition of the Stars and Stripes, and written the two-page "Beachhead Edition" of the paper almost single-handedly from Normandy for the first few weeks after the invasion. He was part of a small team that got the paper going in France.

Kennedy was a wire reporter. That meant he was under constant pressure to beat his fellow newswire reporters at chief rivals Reuters and United Press International, among others. The pressure and competition was, and remains, fierce among newswire services. Even in my working life, I have known AP, Reuters and Bloomberg reporters who worked feverishly to beat their rivals by seconds--whether they had all the facts right or not.

After the war, my father was an editor for the New York Herald Tribune and then editor-in-chief of The New York Law Journal for more than two decades. He was sympathetic to the pressure Kennedy, whom he knew, felt. Yet, as an editor, he objected to Kennedy acting like a cowboy by not including his editors in the decision about whether to break the embargo. Kennedy simply filed his dispatch by phone, and his editors naturally thought he was clear to do so and that they were clear to publish.

AP chief Tom Curley says Kennedy "did everything just right," and he cites storied journalist A.J. Liebling as among those who believed Kennedy was correct to break the embargo pledge and say "to hell" with military censors.

Sixty-seven years later, it's easy to take the position that Kennedy was putting "the people's right to know" ahead of the alleged political considerations. The public today is pretty ignorant to press embargoes, and have come to get their news and information from bloggers, Twitter and the like, none of which we can imagine adhering to news embargoes dictated by government censors.

But 1945 was a different time technologically and in many other ways. And let's not think for a minute that Kennedy was motivated by "the people's right to know." Recalling my father's account, I know he said the following to me, though it is not on tape: "Kennedy wanted the scoop, plain and simple."

Not only did Kennedy put the AP in a bad spot, but his actions emboldened the censorship activities of the military on reporters in the Korean War.

All reporters want scoops, and they always have. And Kennedy defended his action by saying that once the Germans admitted to surrendering in the broadcast, the pledge he gave to Brigadier General Frank Allen, the public relations officer, in the presence of the other reporters was null and void. But that was a decision he came to on his own, without conferring with his own editors. He did appeal to the censors to lift their ban once the German broadcast had taken place, but to no avail.

Kennedy's dispatch came through to AP's New York office at 9:35AM Eastern War Time. The AP said there was no indication that it did not come through normal censorship channels. It was not until 11:15AM that that AP got the first inkling that it was unauthorized. Kennedy, it is not a stretch to say, lied to his superiors (even though it was a lie of omission) to get his scoop.

Other news organizations, still holding to the embargo, were allowed to cite the AP account until they could publish their own reports following the lift of the embargo. It was galling to the reporters who had covered the war for years, and wanted their opportunity to write the finale.

In the aftermath, the AP dispatches from Europe were muzzled, and its access to high command and official military events was cut off. Kennedy was suspended, and fired the following November.

AP's Curley called Kennedy's dismissal "a great, great tragedy" and hailed him and the desk editors who put the surrender story on the wire for upholding the highest principles of journalism. "They did the right thing," Curley said. "They stood up to power."

Really? The desk editors were in the dark when they put the story up. They had no idea that they were standing up to power. And has Curley, who wrote the forward to the book published by Kennedy's daughter, perhaps given today's AP reporters greater license to flout the process that he oversees of reporters and editors working together to produce the best, most responsible and accurate news product?

Though my father had been beaten on a story he naturally felt he was leading on, he was not bitter in the least. Just as Kennedy later published an article titled, "I'd Do It Again," about his flout of the embargo, so did my father go to the grave proud of his service, his work, his integrity, and his place in history.

My Father And Edward Kennedy: Another Side Of The AP's World War II Apology
Archival Photographs From World War II 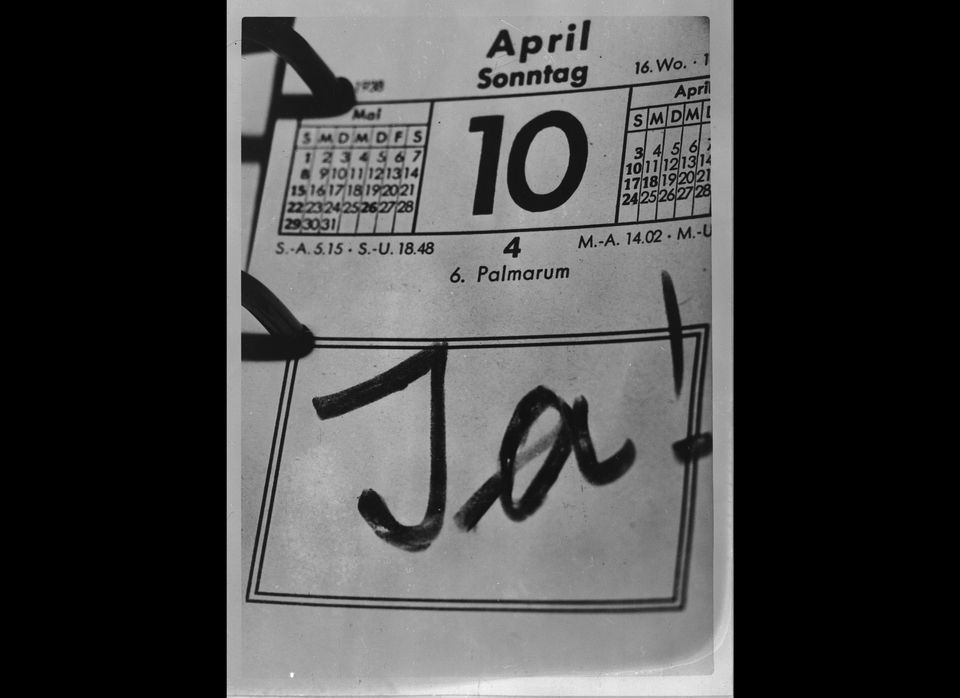