WASHINGTON -- Apache protesters completed their cross-country journey from the San Carlos reservation in Arizona to Washington, D.C., with a Wednesday rally on the lawn of the Capitol building, protesting Congress’ sale of their sacred Oak Flat to foreign mining conglomerates.

The area known as Oak Flat is part of Arizona's Tonto National Forest, and the Apache have used it for generations in young women’s coming-of-age ceremonies. In 1955, President Dwight Eisenhower removed it from consideration for mining activities in recognition of its natural and cultural value. But in December 2014, during the final days of the previous Congress, Sens. John McCain (R-Ariz.) and Jeff Flake (R-Ariz.) added a rider to the must-pass National Defense Authorization Act that opened the land to mining conglomerates Rio Tinto and BHP Billiton.

That change led to this week's protests in Washington. Wendsler Nosie Sr. and his granddaughter, 16-year-old Naelyn Pike, led the Apache Stronghold coalition with speeches, prayers and songs, vowing to save land that is holy to them. At a separate rally Tuesday, they were joined by over 200 supporters -- many representing faith groups in solidarity with the Apache -- as well as Rep. Raúl Grijalva (D-Ariz.), who introduced legislation in June that would once again protect the land from mining. The bill has received support from the Sierra Club, National Congress of American Indians and tribes throughout the country.

"I’ve been fighting Congress on this issue in my life for, God, over 40 years," Nosie told The Huffington Post. "Now everybody has that great sense that the American Indians, with the religions that we have, need to come to the forefront."

"This is a violation of sacred sites and a violation of trust responsibility, and continues a historic pattern of neglecting and overlooking and ignoring the rights of Native people across this country," Grijalva told The Huffington Post.

Oak Flat was originally part of the old San Carlos reservation, which was called "Hell’s 40 Acres" by the soldiers stationed there in the 1800s. It functioned as a prisoner-of-war camp for the Apache during their decades-long struggle against the United States and Mexico. Not far from Oak Flat is a place called "Apache Leap," where Apache warriors plunged off a cliff to their death rather than surrender to the United States cavalry in 1870. This is the land of Geronimo, Cochise and Mangas Coloradas.

The protesters say the proposed Resolution Copper mine would destroy all that history.

In the tradition of leaders and generations past, the organizers of the Apache Stronghold are fighting to protect their rights to pray, worship and come of age in their sacred homelands.

"It’s like taking away a church," Pike said. "But the thing about Oak Flat is it's worse, because you can rebuild a church. Oak Flat will be completely destroyed and it could never come back."

While many are pushing to save Oak Flat, the fate of Apache holy land rests on the success of Grijalva’s bill -- a long shot.

Although the bill has 17 bipartisan co-sponsors in the House, the congressman is concerned that it will be difficult to get a hearing in the natural resources subcommittee on Indian, Insular and Alaska Native Affairs, which is chaired by Don Young (R-Alaska), a representative that some view as hostile to Native rights.

"It’s Don Young’s way or the highway when it comes to that committee," Grijalva said.

Young's office did not immediately respond to a request for comment.

But it has been even more difficult for Grijalva to convince members of the Senate to take on McCain, an influential senator who chairs the Armed Services Committee and sits on the Committee on Indian Affairs.

Grijalva is still looking for a senator to introduce companion legislation, although he listed a number of potential allies.

Although Native Americans have been guaranteed the protection of their sacred sites for decades through the 1978 American Indian Religious Freedom Act, opponents say the sale of Oak Flat tramples over that law and sets a precedent for Congress to let big business undermine Native rights to land and worship.

"This is a precedent setter, because if we do not repeal this portion of [the NDAA bill], then sacred sites and religious burial sites -- all the things that are by law protected -- are suddenly expendable, which sets a precedent for other parts of Indian Country," said Grijalva. "If we are to protect sacred sites, and with this fight on Oak Flat build the profile and the significance of sacred sites to Indian people, then we are setting a precedent in other places as well."

A group of Native Hawaiians are currently fighting to protect Mauna Kea from a massive telescope proposed on their sacred mountain. And on Monday, the Pit River Tribe in California won an appeal to protect their sacred Medicine Lake from geothermal developers.

"This coalition -- this awareness -- is building," said Terry Rambler, chairman of the San Carlos Apache Nation, in his closing remarks at Wednesday's rally. "It keeps building every day. So let's keep together. Let's stay united. And let's show the world out there that in the United States of America, freedom of religion still lives!"

"If I die, I die a proud Apache woman because I fought like my ancestors," she continued. "I fought for those future generations." 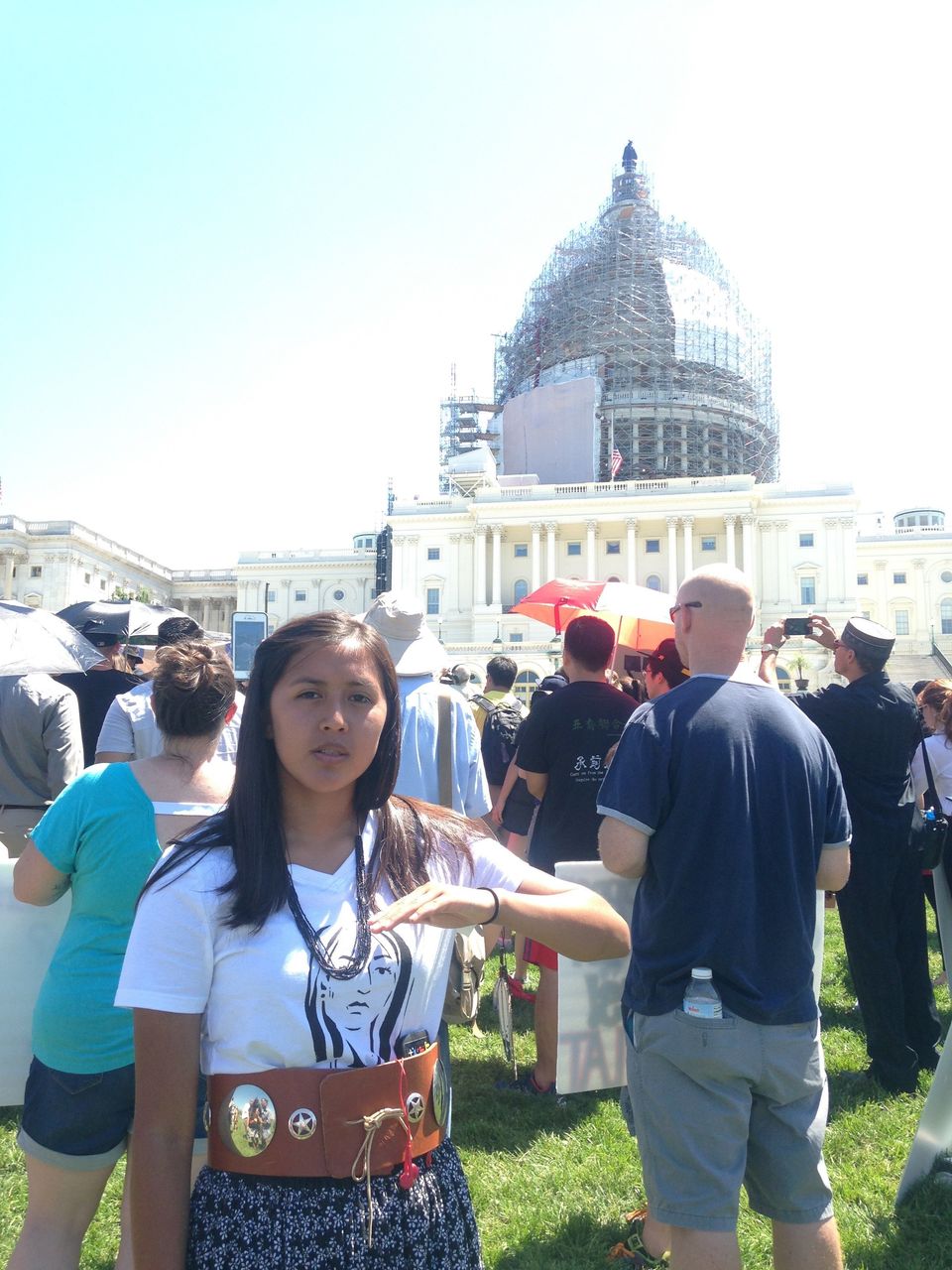