DENVER — A small roadside quarry west of Denver, site of some of the infamous "Bone Wars" of the 19th century, has revealed a new treasure: the snout of the long-necked dinosaur Apatosaurus ajax.

The specimen, nicknamed Kevin, is the first Apatosaurus ajax muzzle ever found, and the discovery is likely to help paleontologists understand how A. ajax is related to other Apatosaurus kin, said Matthew Mossbrucker, the director of the Morrison Natural History Museum in Morrison, Colo., and the paleontologist who first identified the bones. 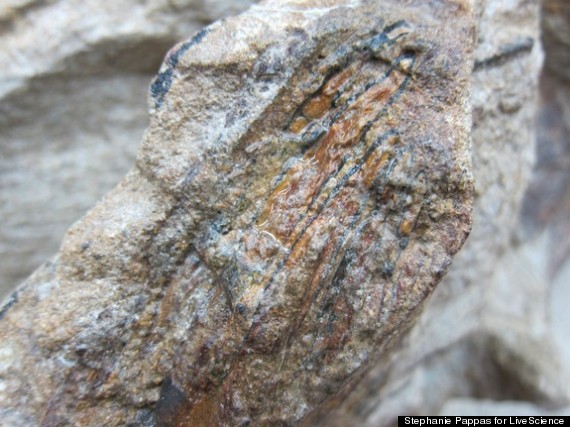 The teeth of the new apatosaur specimen. Volunteers at nearby Dinosaur Ridge, where this fossil was found, mistook these for crocodile teeth until 2003.

"It's the finest Apatosaurus snout on the planet," Mossbrucker told LiveScience at his office, tucked away in a corner next door to the room where he and volunteers have been painstakingly carving Kevin's bones out of sandstone for two years. "There's not a finer maxilla or premaxilla from any Apatosaurine anywhere." [See Images of the New Apatosaurus Snout]

Apatosaurus is perhaps most notorious for its complicated naming history. The dinosaur species was discovered first by naturalist Arthur Lakes in the foothills of Colorado, along a ridgeline now visible from Mossbrucker's office. Lakes was nominally working for Yale paleontologist O.C. Marsh at the time — though Marsh was slow in sending funds for the excavations, prompting Lakes to write to Marsh's bitter rival, Edward Cope, as well. These two men were the leading figures in the Bone Wars, a rush of fossil speculation and explosive rivalry that even extended to destroying fossils to prevent the other man from getting ahead. [Mad Geniuses: 10 Odd Tales of Famous Scientists]

Marsh eventually came through with the cash for Lakes, and two years later, Marsh's men uncovered another long-necked skeleton in the same rocks that yielded Apatosaurus, this time in Wyoming.

But the change in moniker doesn't make Apatosaurus any less impressive. A. ajax was as long as three school busses and weighed as much as eight Asian elephants taped together — a calculation that doesn't include the weight of the tape, Mossbrucker is quick to note.

Contrary to cartoons of dopey, ponderous long-necks, Apatosaurus had lightweight vertebrae that would have allowed it to move its head rapidly: Imagine a neck the length of a school bus, flitting up and down and side to side like an ostrich neck.

"There's almost nothing to the neck," Mossbrucker said. "Thin bone and a lot of air and some strong muscle."

Mossbrucker first discovered Kevin in 2003. Volunteers with Friends of Dinosaur Ridge, a group that maintains a fossil site just west of Denver, asked him if he'd seen the fossilized "crocodile teeth" at Quarry 5, a small road cut on the west side of the scrubby sandstone ridge. Mossbrucker went to take a look and immediately realized that this was no crocodile.

"The enamel is too thin and the geometry of the teeth is all wrong," Mossbrucker said. "These are way too long and skinny."

The fossil teeth were embedded in a loose boulder that had eroded out of the hillside, and there was evidence that passersby were chipping away at the exposed dinosaur bones in the rock, taking souvenirs. To protect the boulder, Mossbrucker and his museum staff used "tractor, truck and brawn" to move it to the nearly Morrison Natural History Museum.

However, the Morrison sandstone surrounding the fragile fossils was so hard that Mossbrucker and his colleagues were afraid that trying to remove the rock would irreparably damage the bone. So they waited. And waited some more.

Finally, in 2011, the museum acquired some state-of-the-art pneumatic tools that can remove hard rock without transmitting damaging vibrations to fossils embedded inside. With these tools, they began the slow process of revealing the dinosaur bones.

What they found was a "Jurassic gumbo" washed into place by a flood 148 million years ago, Mossbrucker said. An Allosaurus cheeckbone nestles against the Apatosaurus maxilla and premaxillae, the bones of the snout, and tiny specks of fish bone surround the larger assemblage. Much of what is in the block remains mysterious.

But what has been revealed of the snout is highlighting unknown anatomical features of Apatosaurus ajax, including a large antorbital fenestra, or hollow space in the skull, which would have influenced the tone of the Apatosaur's calls. Other long-necks had this space, Mossbrucker reported in October at the annual meeting of the Geological Society of America in Denver, but A. ajax's was particularly large.

The discovery also reveals that Lakes' long-ago excavations were close to discovering yet another Apatosaur: Teeth found in Quarry 5 by Lakes were declared by Marsh in 1884 to belong to Diplodocus lacustris, another long-neck species. But those teeth, now held in Yale's collections, look just like Kevin's. In other words, Diplodocus lacustris didn't exist — instead, Lakes found part of Kevin and missed the rest.

Mossbrucker and a slew of museum volunteers are still working to coax more of Kevin from its boulder. (The specimen got its name simply because museum staff and guests found it amusing.) The current plan is to cleave the block in half so that the pieces can be scanned with micro-CT (computed tomography). This technology would allow paleontologists to see inside the block and even to 3D-print a perfect copy of the bones inside without having to remove them physically.

"That way I don't have to put the specimen at any more risk than I have to and we still get the data we need," Mossbrucker said.

The process is slow going, however, in part because the team keeps finding bones in what they expected to be just rock. Mossbrucker expects to publish his findings in about a year, marking the latest milestone in a 140-year saga of discovery.

"This is a detective story," he said. "It's very Sherlock Holmes-y."