Aphrodite is a largely misunderstood Greek goddess. Jealous? Shallow? Oversexed? Although these qualities make Aphrodite a marketing department's muse (her name is used to sell lipstick, lingerie, sandals, toilets, bikinis, and libido support), they're actually far from who this deity really is. 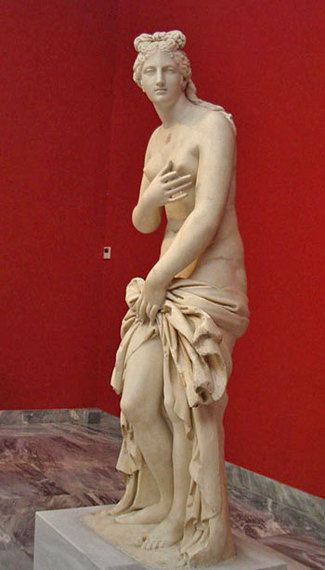 To get a modern-day sense of Aphrodite's power and majesty, take a look at Beyonce's performance at the MTV Video Music Awards on Aug. 24, 2014.

Not only was Queen Bey's 16-minute medley from her self-titled album flawless and edgy, but it was a testament to the power and majesty of a woman who knows her worth -- the embodiment of Aphrodite. After watching Beyoncé's performance, you may agree that Aphrodite isn't dead but merely had a costume change.

If ever there was a goddess who's been misunderstood, mysogynized, and commodified, it's "golden Aphrodite the Cyprian, who stirs up sweet passion in the gods and subdues the tribes of mortal men...."

In other cultures, this goddess was known by many names: Inanna, Ishtar, Astarte, Venus. In her rule as Aphrodite, her allure was so powerful that birds and creatures of the earth and sea all fell under her spell.

Jane Meredith, author of Aphrodite's Magic: Celebrate and Heal Your Sexuality, says that she experiences Aphrodite as "a Goddess who has been completely misinterpreted by the patriarchy and sold to us the way women's sexuality is portrayed -- as both terrifying/overwhelming and also as a commodity."

Meredith says that in reality, Aphrodite is "deep compassion, utter love and joyous delight in the world." Think about the famous Botticelli painting where Aphrodite is naked in a half-shell, gazing clear-eyed at the viewer. She is liberated, unbounded. "'Here I am, unafraid and whole and utterly myself," says Meredith. 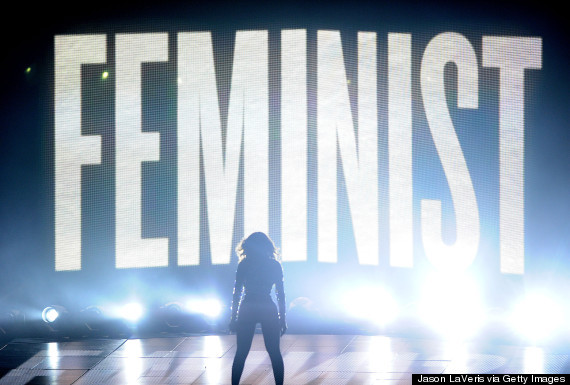 Back to Beyoncé's performance. Juxtaposed with her gyrations is a blatant, liberating, pro-feminist message. At the 10:25 mark, words from Nigerian author Chimamanda Ngozi Adichie rise tall behind female dancers in an assembly line. Adichie's voice-over declares:

We teach girls that they cannot be sexual beings in the way that boys are. We teach girls to shrink themselves, to make themselves smaller. We say to girls, "You can have ambition, but not too much. You should aim to be successful, but not too successful. Otherwise you will threaten the man." Feminist: a person who believes in the social, political, and economic equality of the sexes.

This kind of self-awareness is purely, joltingly Aphrodite. HuffPost has written about Beyoncé's brand of feminism, and I would direct readers to Jannell Hobson's thoughtful analysis in Urban Times to learn more.

But this post isn't about the body politic. It's about the sweetly winning, coy-eyed goddess from the aphros ("sea foam"). I invite you to consider that Beyoncé's sexually empowered, in-your-face choreography and lyrics are a modern-day channeling of Mighty Aphrodite herself. As Beyoncé makes love to the camera, broadcasting to 8.9 million television viewers, she is proving that the goddess is alive and accessible.

What are we to learn from all of this? As the embodiment of the generative powers of nature, Aphrodite may be a remedy for our Western culture, a culture largely subsisting on sexual repression, shame, guilt, and addiction. Casting aside that distorted mirror, Aphrodite helps us see ourselves more clearly. And in that process we are made whole.

Goddess of love? Check. Goddess of sex? Check. Post-modern goddess of pop stars who empower audiences to celebrate their innate power and be a force of creativity in the world? Check.