Forty-four years (and three days) after it helped launch the first men to walk on the moon, a huge rocket engine part salvaged from the ocean floor has been positively identified as a historic component of the Apollo 11 lunar landing mission.

"I'm thrilled to share some exciting news," Amazon.com founder and CEO Jeff Bezos wrote Friday (July 19) on his Bezos Expeditions website. "44 years ago tomorrow [July 20] Neil Armstrong stepped onto the moon, and now we have recovered a critical technological marvel that made it all possible."

After their fuel was spent, the 12.2-foot-wide-by-18.5-foot-tall (3.7 by 5.6 m) F-1 engines were allowed to drop into the Atlantic Ocean. The force of the impact with the water and their ensuing plunge to the seafloor 14,000 feet (4,300 m) below the surface ripped apart the massive structures, leaving them almost unrecognizable. 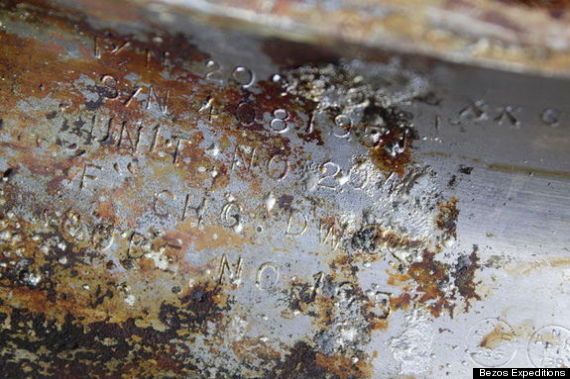 Corrosion removed from the base of a Saturn V engine thrust chamber recovered by Amazon CEO Jeff Bezos has exposed the serial number "Unit No 2044" stamped into the part's surface.

In March 2013, Bezos revealed that his team had raised the parts for at least two F-1 engines, but they didn't know if they were from Apollo 11 or one of the 12 other Saturn V rockets that flew between 1967 and 1973, each equipped with five of the engines.

"There was one secret that the ocean didn't give up easily: mission identification," Bezos wrote on his website. "The components' fiery end and heavy corrosion from 43 years underwater removed or covered up most of the original serial numbers."

The job of identifying the heritage of the thrust chambers, gas generators, injectors, heat exchangers, turbines, fuel manifolds and dozens of other F-1 engine artifacts fell to the conservation team at the Kansas Cosmosphere and Space Center in Hutchinson, Kansas. In addition to their work cleaning and stabilizing the parts for public display, the conservators were tasked with meticulously inspecting and documenting each component.

"One of the conservators who was scanning the objects with a black light and a special lens filter has made a breakthrough discovery – '2044' – stenciled in black paint on the side of one of the massive thrust chambers," wrote Bezos. "2044 is the Rocketdyne [company] serial number that correlates to NASA number 6044, which is the serial number for F-1 Engine #5 from Apollo 11."

After removing more corrosion from the base of the same thrust chamber, the conservator also found "Unit No 2044" stamped into the massive engine part's metal surface.

"Huge kudos to the conservation team," Bezos exclaimed on his Expeditions site. "Conservation is painstaking work that requires remarkable levels of patience and attention to detail, and these guys have both."

The team at the Kansas Cosmosphere expects that it will take about two years to complete the conservation of the engines. During that time, the public can view the parts and see the work being done to preserve them through a special tour offered at the museum's SpaceWorks facility.

A website with a live camera view of the same facility is also being developed.

The conservation work is being done under an agreement between Bezos and NASA. The space agency is retaining ownership of the artifacts and will ultimately decide where they go on museum display.

In addition to the National Air and Space Museum, Bezos earlier expressed interest in having one of the engine's parts displayed at The Museum of Flight in Seattle, which is located near Amazon's headquarters and the offices of Blue Origin, the commercial spaceflight company founded by Bezos in 2000.

That at least one of the F-1 thrust chambers is now known to have flown on Apollo 11 adds to the historical significance to the engine parts' eventual exhibit.

"This is a big milestone for the project and the whole team couldn't be more excited to share it with you all," Bezos stated.

Take a look at the F-1 engine parts being conserved at the Kansas Cosmosphere's SpaceWorks Observation Gallery.