The 13th-century Sopoćani monastery is a UNESCO World Heritage Site near the source of the Raška River, just east of Novi Pazar in the south-western corner of Serbia. After two centuries of attack, desolation and abandonment, its Church of the Holy Trinity is now rebuilt, its frescoes restored and its monastic life revived. 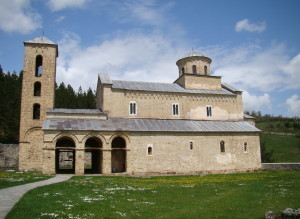 In the southern choir of that eastward-pointing church are frescoes of seven apostles. Five are now unidentifiable, as time and decay has literally defaced them, but each is folding a single scroll. Matthew is identifiable and he is holding the book of his Gospel. But the most clearly identifiable is the leading figure on the choir's east wall. It is the apostle Paul, complete with his recognizable receding hairline. His right hand is raised in the traditional Byzantine teaching gesture of fingers separated into two (for two natures in Christ) and three (for three Persons in the Trinity). What is extraordinary, however, is that his left hand holds 10 clearly distinguishable scrolls -- not a single scroll or book but 10 scrolls in a cluster.

Why 10 scrolls when Christianity's New Testament attributes 13 letters to the apostle Paul: letters to communities such as the Romans, Corinthians (twice), Galatians, Ephesians, Philippians, Colossians, Thessalonians (twice) and to individuals such as Timothy (twice), Titus and Philemon.

There is, however, a massive consensus in modern scholarship that those three letters to Timothy and Titus were written in Paul's name but long after his death. It would seen, then, that around 1265 a Byzantine artist at Sopoćani already accepted that viewpoint -- hence, only 10 scrolls for 10 letters.

There is also a strong (but not massive) consensus among much of modern scholarship that a further three of those 10 letters were not written by Paul. In other words, we have seven letters certainly from the historical Paul (Romans, 1-2 Corinthians, Galatians, Philippians, 1 Thessalonians, Philemon), three others probably not from him (Ephesians, Colossians, 2 Thessalonians) and a final three certainly not from him (1-2 Timothy, Titus). Those are all, of course, historical conclusions and not dogmatic presumptions. Well and good, but, even if correct, so what? And why should anyone care? 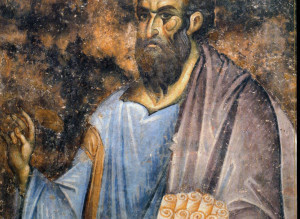 It is not just that we have factual and fictional letters of "Paul" or that those 13 letters are mixed between a Paul and a Pseudo-Paul. It is not just that, after Paul's death, followers imagined him in new situations and had him respond to new problems -- as if in a seamless if fictional continuity from past into present and future.

In other words, the radical Paul is being deradicalized, sanitized and Romanized. His radical views on, for example, slavery and patriarchy, are being retrofitted into Roman cultural expectations and Roman social presuppositions. Watch, then, how it works in terms of slavery (I leave patriarchy for my next blog in this series on Paul):

The radical and historical Paul sent back the now-converted slave Onesimus to his owner and told him that a Christian could not own a Christian for how could Christians be equal and unequal to one another at the same time? He reminds him "to do your duty," to free Onesimus, and to consider him "no longer as a slave but more than a slave, a beloved brother -- especially to me but how much more to you, both in the flesh and in the Lord" (Philemon 1:8,16).

Next, the later, conservative counter-Paul takes Christian owners with Christian slaves absolutely for granted, addresses both classes and reminds each of its mutual obligations. "Slaves obey ... fearing the Lord" and "Masters treat your slaves justly ... you also have a Master in heaven" (Colossians 3:22-4:1 & Ephesians 6:5-9). Christian-on-Christian slavery is back but now in kinder, gentler mode!

Finally, the still later and reactionary anti-Paul never mentions mutual duties, addresses only the master, and says to "tell slaves to be submissive to their masters and ... to be an ornament to the doctrine of God our Savior" (Titus 2:9-10).

What is at stake in that sad progression from Paul to anti-Paul? Why is it of importance that -- at least with regard to slavery -- radical Christian liberty is being changed back into normal Roman slavery. It means this: Jewish Christianity is becoming Roman Christianity. And this: Constantine here we come!