(Reuters) - On a remote outcrop in divided Cyprus, Greeks and Turks have put aside decades of enmity to restore their shared cultural heritage, battered by war and neglect.

Every day for the next 16 months, Greek and Turkish Cypriots will be working on the Apostolos Andreas monastery, an imposing two-storey sandstone structure dedicated to St Andrew and built atop jutting rocks at the pinnacle of a needle-shaped peninsula.

It is built on the spot where, according to legend, the Biblical figure's boat ran aground on rocks during a missionary journey to Rome. Natural spring water flows from the site.

A point of contention for decades, authorities on the island agreed this year to cooperate on a restoration following warnings by experts that the structure could soon collapse.

"This shrine is important for all Cypriots. It is something we wanted to do for many years, and it just confirms what we can do when we cooperate," said Takis Hadjidemetriou, a Greek Cypriot member of a team seeking to preserve the cultural riches of Cyprus, which was partitioned after a 1974 war. 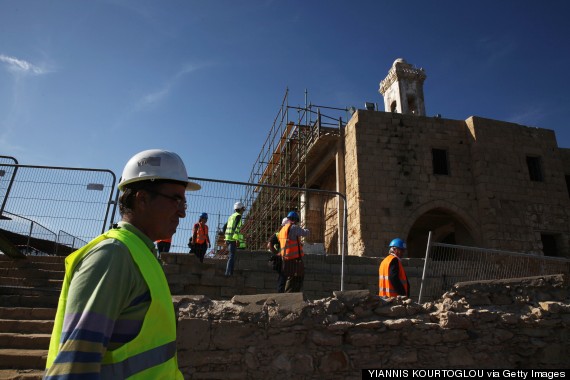 The 5 million euro ($6.23 million) project, to be spread out over four phases, will be financed jointly by Evkaf, a Turkish Cypriot religious foundation, and the Church of Cyprus. The United Nations Development Programme is overseeing the project.

Cypriots have been making the pilgrimage to Apostolos Andreas -- which is closer to Syria, 60 miles (100 km)across the Mediterranean, than to the island's capital Nicosia, a three-hour trip by road -- for centuries.

Served by a lone priest for 40 years, the monastery's isolation is evident; feral but friendly donkeys besiege visitors, begging for scraps of food.

Wax statues -- votive offerings known as "tamata" in Greek Orthodox culture -- are common in the complex and usually signify a prayer to heal illness.

While mainly Orthodox Christian Greek and Muslim Turkish Cypriots share many common traditions, Apostolos Andreas is the one site where religious boundaries are blurred.