Ever wish you could swing by the local shelter and take a dog out for a walk?

There might soon be an easy way to book that. A San Francisco-area couple is developing an app to help match up shelter dogs with canine lovers who want to take them out for a stroll.

Walkzee was inspired by a program that Charlie Saunders and his wife Cristina enjoyed -- a lot -- while on a Hawaiian honeymoon. They took out a doggie named Big Z from the Kauai Humane Society, which encourages visitors to borrow shelter dogs for day trips like hiking or the beach.

Such outings are great for the dogs, who get more relaxed and well-socialized. Wearing cute little "adopt me" vests, they also get exposed to lots of new potential adopters.

The humans obviously love it, too. "It really was the best thing we did on our honeymoon," Saunders says.

"While on the walk we talked about how amazing it was as a program," he told The Huffington Post. "So many dog lovers don't have a dog to spend time with, because of their job or home situation. Meanwhile, so many dogs wait for a walk in a shelter. We think this is crazy."

The pair wanted to see if they couldn't get more shelter dogs out walking with more dog lovers -- leading, in turn, to more adoptions. 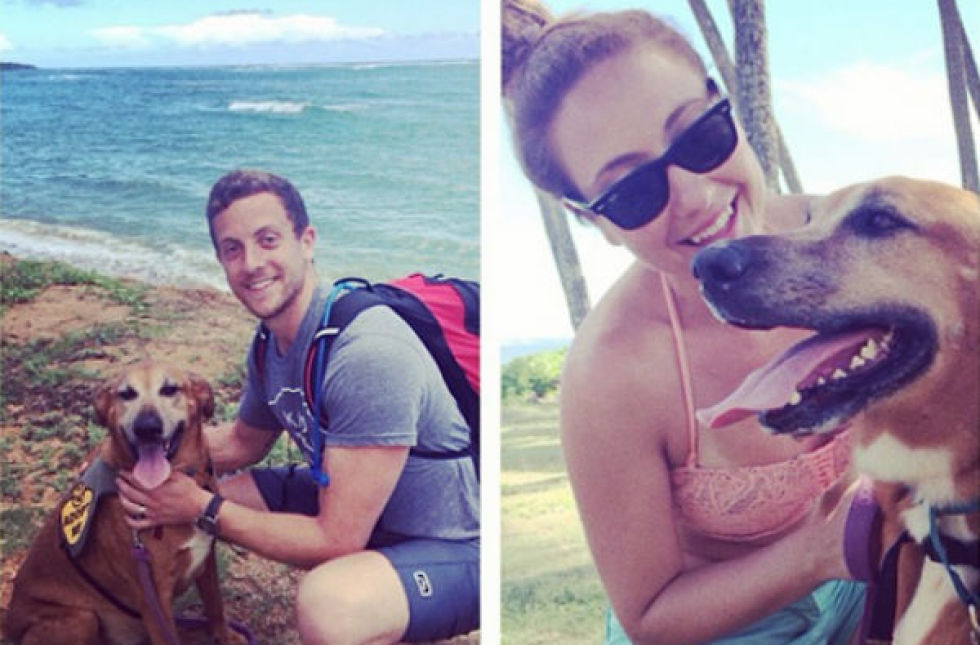 The couple had a great time with Big Z, and wanted to make it so other dog lovers -- and other shelter dogs -- could also get out walking. (photo courtesy Walkzee)

Here's how the app would work: Shelters could list their dogs on Walkzee, then would-be walkers would search for those dogs by location. They'd request a walk using the shelter's preferred method, which could be through the app, by reaching out to the shelter directly, or in any other way the shelter likes to field requests.

Afterward, walkers could leave Yelp-like reviews for both dogs and shelters. They'd also be able donate directly to the shelters through the app. Walkzee won't take a cut, Saunders says; the app, which will be free, will likely rely on advertising to make money.

Users could also share their experiences on Facebook and other social media platforms, giving the dogs more exposure.

And after that, if things go very well? "You can also send an adoption request to the shelter and kick off the adoption process," says Saunders.

The hope is that Walkzee will launch in June. Saunders and his wife are currently holding a Kickstarter campaign, which is about two-thirds of the way toward its $20,000 goal. Saunders says there are other funding avenues available, should crowdfunding not come through.

There are still a few other initial steps left to complete before the first version of the app is actually ready for use, like getting actual shelters on board. Saunders says he's already heard from a handful of organizations who are ready to sign on, and he's confident that there will be plenty more pickings by launch time.

He has reason to be optimistic. For one thing, more and more shelters are already offering Kauai-like walking opportunities. They're available now at shelters in Northern Virginia, Austin, Atlanta and Utah, to name a few places.

For another, there are designs on enticing more shelters into joining by offering up bonuses like dog-supply packages -- with leashes, blankets, etc. -- for participants.

Future app features may include some sort of background check process for walkers, Saunders says, and perhaps a version of Walkzee for people who like cats. (May we suggest "Meowzee?")

Itching to take a shelter dog for a walk? Don't go looking for Big Z, the inspiration for all these plans. That sweet boy's been adopted.

Find out more about the app on the Walkzee Kickstarter and Facebook pages.