If you want to know why Apple just dropped $3 billion -- its biggest acquisition by far -- on a company that makes overpriced and arguably poor quality headphones, look no further than iTunes.

Times have changed since Apple first launched the iTunes Store in 2003, which allowed us to skip a trip to the record store and download the latest music for our iPods. Although digital downloads remain the biggest revenue source for the U.S. recording industry, people are increasingly turning to streaming music services like Spotify, Rdio and Google Play Music All Access -- and away from downloads -- to get their music.

In 2013, digital downloads of singles -- think buying a song from iTunes or Amazon -- fell for the first time ever, according to data from the Recording Industry Association of America (RIAA).

But subscriptions to streaming music services like Spotify Premium and Google Music All Access -- which for a flat monthly fee let you listen to as much ad-free music as you'd like, and choose specific songs to listen to -- were up by 79.4 percent last year, according to data from the RIAA.

This is one of the reasons Apple bought Beats. Although Beats is known for its headphones, it launched a subscription streaming service, Beats Music, earlier this year. 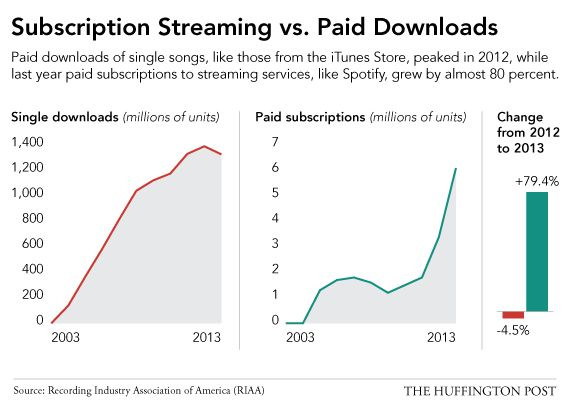 "The legal music download model has peaked," Paul Verna, a senior analyst at eMarketer, wrote in an email. "Apple’s acquisition of Beats is a tacit recognition of this inevitable trend."

Last year, Apple launched iTunes Radio, a Pandora-like Internet radio service that lets you listen to music for free on Apple devices. But as the WSJ's Hannah Karp and Alistair Barr wrote on Wednesday, it "has yet to make much of a competitive dent."

Beats Music, which is only a few months old, is also a relatively small player; Bloomberg Businessweek reports that it's estimated to have between 110,000 to 200,000 members. Spotify, which was founded in 2006, recently announced it had reached 10 million paying members.

Pandora and iTunes Radio, which offer free, ad-supported versions, are different from on-demand streaming services like Beats, Spotify and Google Music All Access because you can't choose a specific song to listen to.

"As download revenues decline, Apple has to bring on an on-demand streaming service in order to compete," said Daniel Matte, an analyst at Canalys. "I don't think Apple wanted the headphones themselves -- they're just a necessary part of buying the whole company."

So yes, as Apple CEO Tim Cook said in an interview with Re/code, "This is all about music."