Clean the house, get rid of bad breath, and see your garden blossom all with one product. See how apple cider vinegar can improve your health, skin, and more.

Clean and Deodorize Rooms, Cars, and More Ditch the chemicals and get a greener clean by using apple cider vinegar (ACV) in place of your normal disinfectants. Apple cider vinegar helps kill some types of bacteria, including E. coli. Spray a mixture of one part vinegar to one part water on a hard surface and wipe off. It’s also great for getting rid of odors - just leave a bowl of ACV near the source of an icky smell until it disappears. You can use it in bathrooms, kitchens, or even the car.

Relieve Jellyfish Stings Cut the sting caused by jellyfish venom by applying apple cider vinegar to the skin, according to "Apple Cider Vinegar For Health." Similarly, ACV added to a bath can help soothe sunburned skin, and soaking cotton balls and applying to bug bites or poison ivy can relieve itching.

Apple cider vinegar works wonders for your hair. Use it to fight dandruff and itchy scalps, or to degunk product buildup and reveal shinier and smoother hair. Mix with water, massage into your scalp, let it sit for at least 10 minutes, then rinse as usual. The vinegar regulates pH levels on the scalp and relieves irritation.

Soothe a Sore Throat Next time you feel the telltale tickle of an oncoming sore throat, try a gargle made with apple cider vinegar. Mix it with a bit of warm water and gargle about every few hours or so. The acid in the vinegar coats the throat and creates a germ-proof environment.

Rid your garden of weeds and make plants like gardenias flourish with apple cider vinegar. Undiluted ACV will take care of weeds without damaging the soil. And for certain plants, diluted ACV acts as a great fertilizer. Use only about one ounce of ACV for each gallon of water to water plants. This works best for gardenias, azaleas, hydrangeas, and blueberry bushes, since they prefer acidic soil, according to Ron Wolford, a horticulture educator at the University of Illinois.

Get Rid of Foot Odor Stop foot odor in its tracks with a bath of apple cider vinegar. Soak feet after a long day in warm water and ACV for a relaxing and odor-absorbing treat. ACV can also help athlete’s foot and toe fungus.

Read more from Grandparents.com: The 10 best color combinations for your home 6 ways to de-drab your home in 60 minutes How to deal with the neighbor from hell 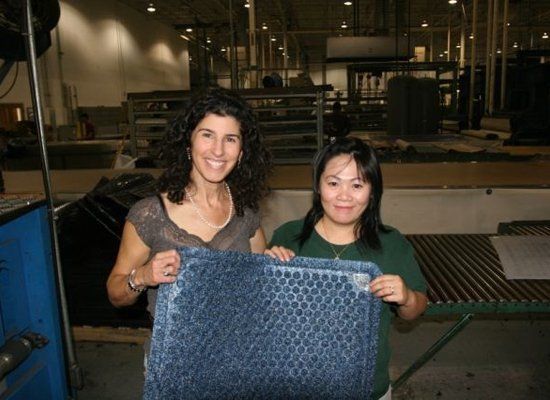 1 / 15
The Perfect Facility
Dr. Doormat, the first antimicrobial treated doormat for the home, is produced with eco-friendly materials at a manufacturing facility north of Atlanta, Georgia.
Debbie Greenspan