Apple has long been thought of -- and positioned itself as -- the cool and trendy computer company, the tech outlet of choice for the young and the hip.

But is it losing its edge with the kids?

A new survey from YouGov BrandIndex suggests just that. In recent polls across all demographics in America, YouGov found that since January 2008, Apple has become far more appealing to adults aged 35 and older, while its appeal to those 18-34 has decreased slightly. YouGov surveys its poll-takers every day, with the simple question of whether a respondent has heard positive or negative news about a company; it tallies that data and creates what it calls a "BuzzScore," which represents a brand's reputation in America.

Here is the chart of Apple's BuzzScore from January 2008 through the present. You'll note that Apple's appeal to the 18-34 demographic has fallen over time, especially from its high in late 2010, while respondents 35 and older seem to increasingly approve of Apple, especially over the past year. The BuzzScore for Apple for those 18-34 is 24, while the BuzzScore for the 35+ crowd sits at 32: 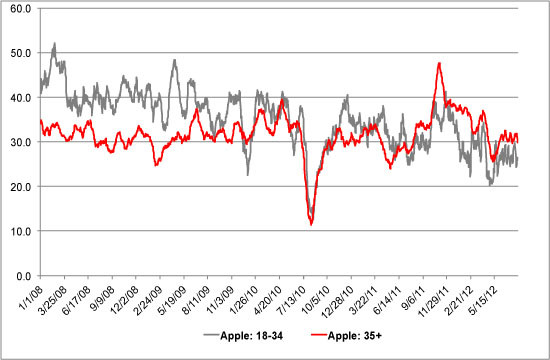 That slow climb in approval from boomers and 40-somethings aligns with something I noted back in November: that Apple advertisements are increasingly targeting new parents and professionals. Gone are the days of hipsters dancing to indie music against neon backgrounds; the new generation of Apple ads shows how well its products work at business meetings, on Saturday with the kids.

That maturation of Apple ads has continued: Shot 1 of commercial 1 for the new iPhone featured a mom in her SUV carrying a carpool of toddlers to ballet practice. And then, of course, let's not forget the newest Apple ads, which feature a youngster Genius kindly assisting a bunch of bumbling adults with their tech troubles.

Those ads are paying off with their target audience, if the steady ascent in adult brand appreciation since mid-May is any indication. And while it has earned the adulation of the 35 and up demographic at the expense of teens and recent college grads, remember: It's the older generation that has all the money, anyway.

It's also important to remember that it's not as though 18-34-year-olds now disapprove of Apple: It's simply that the brand score is slightly lower than it was four years ago. Apple has been the fashionable choice of in-the-know young folks for so many years now that its standing was bound to slip at some point. Nothing gold can stay, as a poet once wrote.

Are we seeing a graying of Apple fans? It's possible! Just as some teens are loath to join the social networks that their parents populate, so too is it possible that they might not think "cool" the gadgets and brands that their parents do. (Do kids still use the word "cool"?)

Even if Apple has slipped a bit recently with its more youthful customers, it's not like Tim Cook and Co. are complaining: Business is still pretty darn hot in Cupertino, in case you've forgotten.

And maybe, too, that HTC exec who ruffled feathers back in September was correct: Maybe the iPhone really is for your dad. Now it's Apple's job to make the iPhone the smartphone for his kids, too.