Apple was accused of homophobia after allegedly banning the sale of an upcoming comic due to its inclusion of "images of gay sex," the author says. But it all proved to be a big misunderstanding.

Controversy ignited when writer Brian K. Vaughan said his and artist Fiona Staples' comic, SAGA #12, would not be sold through any iOS app, the Washington Post notes. He cited the reason as Apple's disapproval of the homoerotic content.

Vaughan discussed the ban in a post on Staples' Tumblr on Tuesday, writing in part:

Unfortunately, because of two postage stamp-sized images of gay sex, Apple is banning tomorrow’s SAGA #12 from being sold through any iOS apps. This is a drag, especially because our book has featured what I would consider much more graphic imagery in the past, but there you go. Fiona and I could always edit the images in question, but everything we put into the book is there to advance our story, not (just) to shock or titillate, so we’re not changing s**t.

Image Comics, the publisher of SAGA, told the Washington Post's Comic Riffs that Apple would not sell the upcoming issue.

“We regret that Apple won’t allow us to sell ‘SAGA’ #12 on the Image Comics app, but that is Apple’s decision and it would be inappropriate for us to tell another company how to run its business,” the statement read.

Image Publisher Eric Stephenson added that it would be "equally inappropriate" for the publishing company to ask Vaughan and Staples to censor their work.

However, digital provider Comixology released a statement on Wednesday stating it was responsible for blocking the sale. CEO and Co-Founder David Steinberger said Apple had nothing to do with the comic being banned, revealing Comixology decided against the comic's digital release.

As a partner of Apple, we have an obligation to respect its policies for apps and the books offered in apps. Based on our understanding of those policies, we believed that Saga #12 could not be made available in our app, and so we did not release it today. We did not interpret the content in question as involving any particular sexual orientation, and frankly that would have been a completely irrelevant consideration under any circumstance. Given this, it should be clear that Apple did not reject Saga #12.

Comixology is set to release SAGA #12 on its app store soon. The Huffington Post reached out to Apple but did not receive an immediate response.

Still, this is not the first time Apple has been accused of homophobia.

In February, Vancouver-based developer Barry McDermott claimed the company banned his gay humor app, "Lil' Flamer" due to its potentially offensive nature. More than 150,000 protested Apple in 2011 for permitting the sale of a gay-cure app in the iTunes store, and it was subsequently removed.

Apple has shown support for the gay community. The company donated $100,000 to the NOH8 campaign in 2008 to fight California's Proposition 8, and it offers equal rights and benefits to employees’ same-sex partners.

Clarification: The headline has been amended to clarify that Apple did not ban the comic. Digital provider Comixology decided against the comic's digital release. 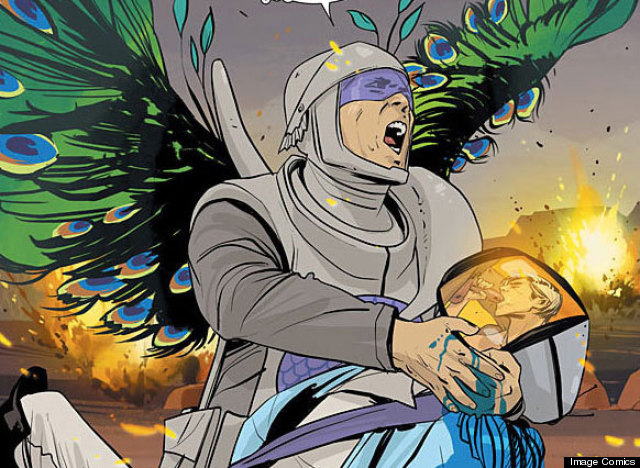