Apple's latest initiative is characteristically ambitious: the reinvention of the textbook.

At an event at the Guggenheim Museum in New York City Thursday morning, Apple executives introduced two new applications that the company hopes will revolutionize the way textbooks are created and consumed: iBook Author, a brand new application for Mac intended for textbook writers and publishers to create iPad-optimized textbooks, and iBooks 2, an update to the iBooks app with several new note-taking and study features.

"One thing we hear louder than anything else is student engagement, inspiring kids to want to discover and learn," Schiller said, according to MacWorld. "That's why we get excited to see student reactions to iPads in the classroom.'

Textbooks on the iPad, Apple hopes, will replace the physical textbook, which Schiller labeled as too heavy, expensive, not portable, not durable, and not interactive. Though modern textbooks have "great content," according to Schiller, they are "clearly not the ideal learning tool anymore."

With that, Schiller introduced iBooks 2 and all of its new enhancements for studying. The free application comes with the ability to highlight important passages, view 3D models, videos and images, make flashcards, look up words in the dictionary within the application, search through the book and more. The application is free to download in the iTunes store

With iBooks 2, Apple announced that its first textbooks would be available immediately for $15. The high school texts will initially come from publishing partners Pearson, McGraw-Hill and Houghton Mifflin, representatives of which were all in attendance at the event.

Apple also introduced iBooks Author, a content creation platform for authors of both textbooks and other works. At the event, Apple focused on textbook authoring, displaying a What-You-See-Is-What-You-Get application for Mac computers, one that enables writers and publishers to create content-rich books in an application similar to the company's Notes and iWork apps. That app is also free and will be available in the iTunes store.

In addition to the textbook-centric apps, Apple also outed an iPhone and iPad app for iTunes U, which will allow teachers to create syllabi, share videos of their lectures, and publish class notes for their students.

"There is no reason that kids today should use the same tools they did in 1950," said Schiller (via Engadget), re-emphasizing that Apple views its entry into textbooks as a new era in education.

Giving the teacher an Apple just got a whole new meaning.

Check the sldieshow (below) to view photos from the event. 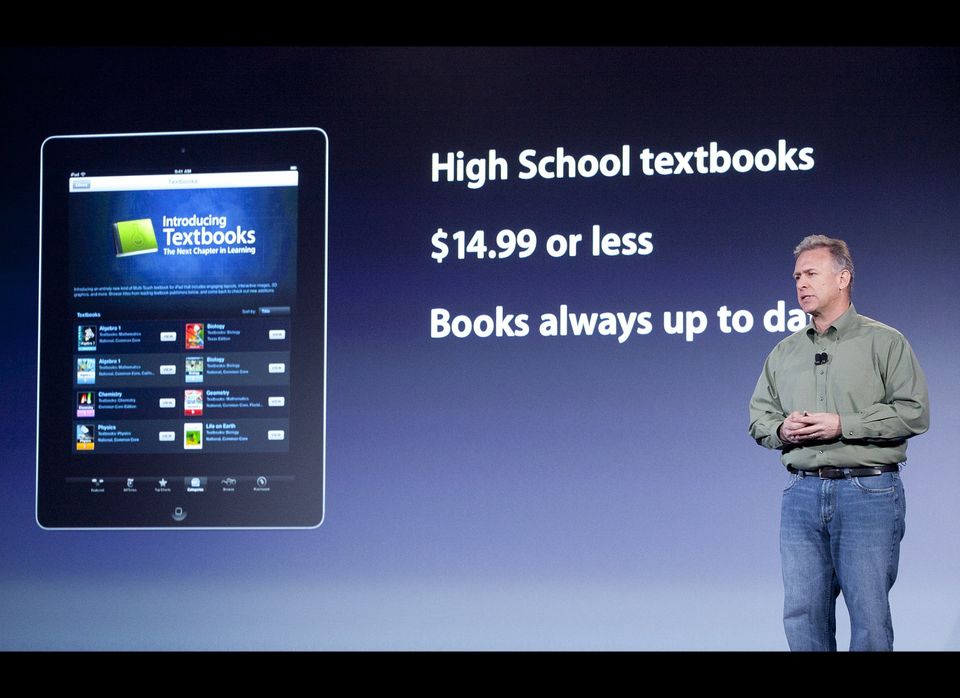