*See iPad pictures and video below*

Can the new Apple Tablet live up to the hype? We've got some early iPad reviews to help you decide.

UPDATED 1/28/2010 2:39 PM ET: Before you go along with Steve Jobs' claim that the iPad is 'magical' and 'revolutionary, take a look at the 9 WORST things about the Apple tablet

No one should actually buy this iPad--between its inevitable first-generation bugs, fulfillment problems, and buyer's remorse over added features and price drops, it's heartbreak waiting to happen. Try to think of the iPad as, like, a proof of concept. A concept car, even. A work in progress, really.

Their suggestion is that rather than view the iPad as something between a laptop and a smartphone--something people have potentially little need for--Apple should position its new device as 'the actual replacement for paper.'

Features and capabilities aside, the web and Twitterverse are abuzz with snide, incredulous, and critical comments.

'iMaxipad,' 'iPeriod,' and 'iTampon' were trending topics on Twitter shortly after the iPad announcement (see screenshot below). 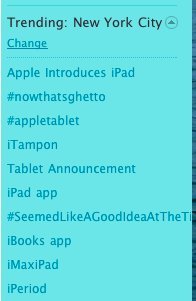 But it was the females in the crowd who read more into Apple's menstrual pun. They seemed to think Apple's name was indicative of a male-helmed team oblivious to the fact that they were pushing an insensitively-named product. "Surely no women were involved in naming it the iPad" was a widely-reTweeted sentiment. Another: "iPad: Proof not enough women work in the Apple Naming Department."

Wired has a full rundown of the iPad's features.

So far, Gizmodo has the most thorough hands-on look at the iPad.

What do they think?

Apple didn't really sell this point, but it's the single biggest benefit of the iPad: speed. It feels at least a generation faster than the iPhone 3GS. Lags and waits are gone, and the OS and apps respond just as quickly as you'd hope. Rotating between portrait and landscape modes, especially, is where this new horsepower manifests in the OS.

Many on Twitter greeted the iPad with a 'yawn,' comparing the new Tablet device to an oversized iPhone.

If you're wondering whether to give up your iPhone for an iPad, check out Engadget's handy tablet that compares the cost of 3G on an iPad vs. iPhone.

Check out photos and pictures of the iPad below.