Last week, a colleague of mine went to the Verizon store to get a new phone. An hour later, he walked out with a new smartphone and a free Android tablet.

That's how cheap tablets have become: Verizon will give you a free one when you sign a two-year contract with the company.

No wonder iPad sales are dropping. On Tuesday, Apple said it sold 13.3 million iPads in the second quarter of 2014, down more than 9 percent from the same period last year. It was the second consecutive quarter that Apple saw a decline in its iPad figures: Three months ago, the company reported a 16 percent decrease in sales.

With super-cheap tablets available from Amazon, Samsung, Asus, Lenovo and companies many of us have never even heard of, why would you shell out upwards of $400 for an iPad?

News of the sluggish iPad sales comes as investors eagerly await new products from Apple. Reports suggest that a bigger-screened iPhone 6 may come out this fall, and that the long-rumored "iWatch" -- which would mark the first time Apple has entered a new product category since Tim Cook became full-time CEO nearly three years ago -- may be released before the end of 2014.

Sales of iPads "met our expectations," Cook told analysts on Tuesday. "But we realized they didn't meet many of yours." 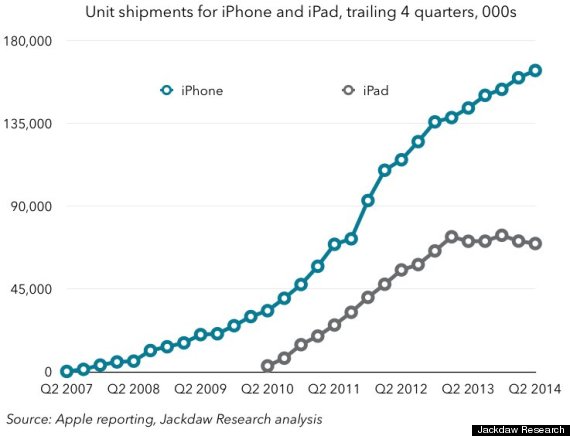 The least expensive full-sized iPad starts at $399, while the most expensive model -- the iPad Air, with 128GB of storage and cellular connectivity -- will cost you nearly $1,000. The iPad Mini starts at $299.

Meanwhile, you can get a decent Android tablet for under $200, and both Amazon's Kindle Fire HDX and Google's Nexus 7 (which CNET calls "the best Android tablet") start at $229. Samsung even has 10-inch tablets -- the same size as the iPad's screen -- starting at $299.

"They literally would rather let the volume decline than get competitive on pricing," Kuittinen said of Apple. "Even a year ago nobody thought that iPad sales would tank like this. It really has hit a brick wall."

Of course, iPhones are expensive, and Apple is still selling a ton of iPhones at an enviable profit. But Apple's premium pricing strategy may work better for phones than tablets, simply because people upgrade their phones more frequently than their tablets. A three-year-old iPad, one that you use to shop online, browse the Web and read news while sitting on the couch, probably suffices. But a phone that age -- which you carry with you everywhere you go -- likely feels slow and out of date.

And although wireless companies are moving away from subsidizing phones, people still pay the cost of their phone over time, which hides the actual cost of the hardware.

"People don't seem to feel the need to upgrade [their iPads]," Jan Dawson, chief analyst at Jackdaw Research, wrote in an email to The Huffington Post. "So the number of people who have an iPad is still growing every quarter, but there aren't many people buying their second or third iPad."

And unlike smartphones, which you can't really share, a family may buy just one tablet for the entire household. If they do buy another -- perhaps for the kids -- they'll likely buy a cheaper one, said Kuittinen.

So it makes sense that, as Cook told analysts on Tuesday, the majority of iPads that Apple sold last quarter were sold to first-time iPad buyers.

In the earnings call, Cook touted high iPad sales growth in developing markets -- 51 percent in China, 45 percent in India and 64 percent in the Middle East. He also said that Apple's recently announced partnership with IBM, its longtime archrival, will be a "catalyst for future iPad growth."

"Over the next year or so, I wouldn't be surprised if we saw growth in iPad start up again, especially if there are new iPads with important new features later this year," he wrote to HuffPost.

Apple, as usual, sold a gazillion iPhones in the second quarter. Well, 35.2 million, to be precise. That's a rise of nearly 13 percent over the same period last year. Sales of Macs also climbed 18 percent.

And investors don't seem to mind that iPad sales are down. Apple stock was up 2.6 percent on Wednesday.