Every week here on The Huffington Post, we run a recurring feature called "This Week In Apple Rumors," which catalogues and dissects a week's worth of dubious, thinly-sourced and improbable rumors about future Apple products. These Apple rumors sprout like dandelions in this Edenic Internet garden of ours and are -- no matter how absurd, nor how opaque their origins -- accepted as gospel by a surprising portion of technology blogs and websites, even if a huge, huge majority of them turn out to be more fake than most $30 bills.

Generally, Apple rumors are proven fake because someone got faulty information, or because Apple decided to go a different direction with a product; in some cases, however, a rumor is out-and-out fiction, an invention of a prankster or fabulist. Case in point: On Monday, Swedish design company Day4 revealed that one of the more notable and ire-raising Apple rumors of the past two weeks was totally, completely and thoroughly made up on a whim, just for laughs. Even worse? Several major tech news outlets picked up on it, and now they all have to issue corrections, apologies and promises to do better next time.

Here's the story, as laid out in an awesome blog post on Day4's website: The design team at Day4 wanted to test "how easy it is to spread disinformation" on the Internet, and they decided to use the overeager Apple-watching community as a test dummy. Day4 mocked up a 3D image of a screw -- yes, a screw -- and then posted that mocked-up screw to Reddit, where they claimed "a friend" who worked at "that fruit company" had emailed them an image of the revolutionary new screw in the upcoming iPhone. The screw in question looked like no other screw that had ever been created, which would have made it nigh impossible for gadget repair shops to remove it or tamper with it using existing tools. If the screw was legitimate, in other words, it would prove that Apple was continuing an ongoing battle against local tech repair companies, having already made the Retina MacBook Pro the "least repairable" laptop ever. Should the next iPhone go that route, too, Apple repair shops might find themselves -- are you ready for this? -- "screwed."

The screw photo was a relatively small post by Reddit standards -- it received just 68 total votes, 43 of them "upvotes," in that subculture's parlance -- but because of the Internet's voracity for glimpses at Apple's secretive product roadmap, and because Apple was already viewed as unfriendly to the interests of gadget service shops, stories that featured the iPhone 5's new, inaccessible screws totally exploded. Tech sites like Boy Genius Report, Macworld UK, GottaBeMobile, AppAdvice and Cult of Mac ("Apple May Be Working On A Top Secret Asymmetric Screw To Lock You Out Of Your Devices Forever") all published speculative articles about what these new tamper-proof screws might mean for the iPhone 5, always couching their articles in the behind-saving rhetoric of "purported" and "if real" and "supposed" and the like. Wired UK even interviewed a real-life third-party iPhone technician to get his opinion on the purported new screw, and what it meant for future iPhone repairs: He didn't think the screw was real or even plausible (hint!), but if it was, he promised that the repair community would, like nature, "find a way." 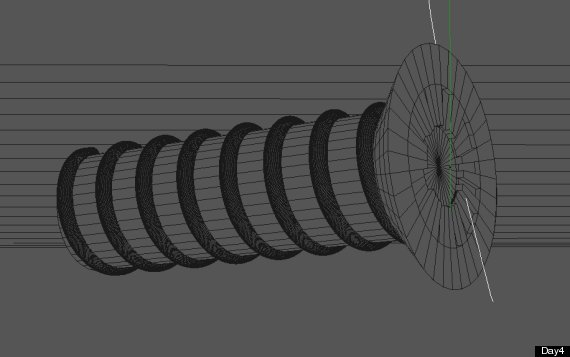 The most famous screw on the Internet.

Offhand "Jurassic Park" references aside, what is perhaps the most intriguing part of Day4's little social experiment -- and this is where you come in, readers! -- is their finding that, while the authors of the stories concerning the screw did clarify that the image was unverified, and that the story should be treated as a rumor, many Internet commenters reacted and carried on as though the new screw was a done deal, railing against the greed of Apple in comments sections. The most highly-rated comment on the Wired article, for example, is typical:

Apple needs to embed small micro-explosives in their devices which will destroy peoples devices and fingers if they attempt to open them. Why have screws at all just spot weld everything in place then embed everything in thermo-conductive solid plastic block, but I would still add the explosive screws, just the wrong torque and kabooomm....


And here's the top comment on Cult of Mac's story:

*Please, no!*
If they would really put this screw into production, I'm sure I won't be the only one to be screwed.


Given its Skull & Bones-esque secrecy, and its near-mute PR staff, you would have to have a screw loose to believe everything that is written about Apple: It seems likely that much of it is attention-getting, fabricated fluff and nonsense. If the past several weeks of journalistic oopsies have taught us anything -- The Supreme Court overturned Obamacare! The Aurora shooter was a member of the Tea Party! Bob Dylan really said those things! -- maybe you just shouldn't believe anything you hear or read, anywhere, at any time, from any source. How do we even know that Day4 really did plant those renderings of the screw? If I can see a table with my eyes, and then I turn around and the table is no longer there -- does the table still exist?

Such are the mysteries of human knowledge, and of the Apple universe. The news outlets who screwed up have issued mea culpas, and the repair community can rest easy knowing that Apple (probably) didn't invent an entirely new kind of screw for the upcoming iPhone. And lucky for the offenders, this latest turn in the screw story does not even represent the most egregiously wrong Apple rumor in recent memory -- remember that iPhone 5 with the 4.6-inch screen and the teardrop shape that was supposed to be released in October of last year? Where are the Swedish pranksters who were responsible for that whopper?

If you're reading Apple rumors, then, we suggest you do so cautiously and with healthy skepticism. To do so otherwise would be just plain screwy.

Check out the gallery (below) to see some of the juiciest Apple rumors from the past week: