"I hope something goes wrong tonight," said Tom, as he met my eye. He'd just finished petting my dog, and he was on his way out the door.

"Well, not really, but you know what I mean," he continued.

I did, indeed, know what he meant.

Tom, along with his boss Ezra, had just spent most of Saturday at my dining room table with me, trying to recreate a disaster like we were Netflix green-lighting Fuller House. So far, no luck.

In the days leading up to our face-to-face encounter, they'd earned more of my trust when they acknowledged that A), they'd read the phone transcripts, and although they maintained that she was mistaken, they did not dispute my account of what Amber had told me, and B), they, too, were convinced this was not user error. Before allowing them into my home, though, I'd laid out some conditions. Their research would be strictly limited to Apple Music, iTunes, and my iTunes library, and I would always be in the room to watch them work. Any information gleaned would be used solely for iTunes and Apple Music troubleshooting. If I had a document on my desktop called "Zapruder Film Unedited," for example, they would still leave it alone. They agreed, both on the phone and in person, so we began.

Through an external drive connected to my laptop, we were now using a specialized version of iTunes in the hopes that the deletion would again occur; an idea that we knew may not pan out, since I'd had Apple Music for eight months before that first mass deletion. If something did go wrong, though, this version of iTunes would document what happened in more detail than the consumer version could.

As one of the first steps in our experiment, I signed back up for Apple Music under Tom and Ezra's supervision. They conference called with several other engineers in California, talking through their actions and discussing next steps.

While we waited for one particularly long file transfer, we went out to lunch at a local bakery. Since they'd flown in from across the country, they were looking for authentic Southern food. Grits were involved. Full disclosure for those of you who think Apple has given me hush money: they did buy me a breakfast sandwich, and it was delicious.

After lunch, we spent hours troubleshooting, but the problem eluded us. This time, the files remained, which was just one of many confounding elements of my whole saga. The problem wasn't cut-and-dry, therefore has proven difficult to replicate. For example, one of the many confusing things about the initial file loss was that only most of my music files had disappeared. Most, but not all. To further muddle the issue, the missing--and remaining--files had little in common; some were WAV, others Mp3, others protected AAC files that I'd purchased when iTunes went through its 2003 through 2009 "controlling boyfriend" phase. Genre, size, and artist name varied greatly among the missing files, as did date added. There was no discernible pattern. 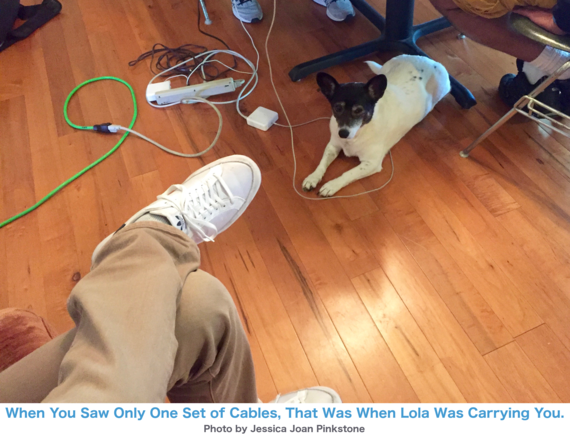 Although the day offered no revelations, we weren't yet finished. Before Tom and Ezra left on Saturday afternoon, we discussed my homework. I was to treat this as any other Saturday night:
-Buy some songs in the iTunes Store.
-Import some of my own mixes from Logic and/or Pro Tools.
-Mess with some playlists.
-Stream my personal library to the Apple TV in the living room while my wife and I drank beers and played Boggle. Hey, I never claimed my life was any more glamorous than yours.

Since our listening choices were being documented and had a marginal chance of being scrutinized for the ages, I made sure to include several songs from the early Sugar Hill Records catalog--which I still think may ultimately lead to world peace. Besides "Rapper's Delight," can Bashar al-Assad even name one song by The Sugarhill Gang? See?

Tom returned alone on Sunday to collect the data logs, and to clear my laptop of any evidence he'd been there.* While we waited for files to transfer, we finally got to geek out a little, which was something I'd admittedly been looking forward to. Although friendly the day before, Tom was of course very focused, and he didn't even mention the Missile Command pint glass in which I'd given him some water. On Sunday, however, he talked more freely. We discussed pets, and work, and horror movies, both agreeing that John Carpenter's The Thing may be the finest ever made. Apple may be a huge corporation, and I'll never see most of what's behind the curtain--but this Senior Engineer, who sat petting my dog and discussing Breaking Bad, was just some guy doing his best. Maybe not exactly like me, but not very different, either. OK, probably wealthier.

I am aware that there are people who think Apple is Satan himself, and I'm not here to try to convince you otherwise. There are also Apple apologists who believe The Great Fruit can do no wrong. You, too, will most likely not be swayed, and I'm sure you have your reasons. Regardless of whether I'll remain a lifelong Apple software user, I'm still glad to have a chance to help those who are.

One of the things on which Tom, Ezra, and I seemed to agree was that Apple is not off of the hook yet. Their software failed me in a spectacular, destructive way; and since I rang that bell, many people have come forward with similar stories. Some may be a result of user error, but I have a hard time believing all are. I think Apple does, too; which is why, as of this writing, they have stated they are currently working on an iTunes update with additional safeguards added. If they can't yet isolate the bug, they can at least develop measures to combat it. Like in The Thing, when... well, never mind.

If you take nothing else away from this, please remember to back up your data. Redundantly. If you don't like to manually click and drag, Retrospect has worked well for me in the past. If you're an Apple user, Time Machine is pretty solid, but keep in mind that Time Machine overwrites its own, older backups when drive space diminishes. That means that, if you don't catch a problem quickly enough, even those automatic backups may be missing the data in question. It's worth taking the time to personally make sure you're backing up what you believe you are.

Now, if you'll excuse me, I'm going to watch the first episode of Firefly. I've never seen it, but Tom told me it's a great program, and I'm trying to keep an open mind. If it turns out to not work for me, I can always do something else with my time and money.

*Just to be safe, I wiped my drive completely and reinstalled everything from a backup I'd made moments before our spelunking commenced on Saturday.