By SUZANNE MCGEE, The Fiscal Times

With only hours, not days or weeks, left to go before Apple (AAPL) is expected to unveil its latest iPhone, speculation and excitement has hit fever pitch. But despite the astonishing 75 percent gain in Apple’s stock price over the last 52 weeks – a tribute to the company’s prowess in convincing consumers that they simply couldn’t do without the iPhone 4S (launched last fall) or a third-generation iPad (launched this spring) – a baker’s dozen of companies with a market capitalization of more than $2 billion managed to generate even more outsize returns for their investors.

This has been no mean feat. During that period, the stock market as a whole has generated a return of 24 percent – and it has been a bumpy ride, especially in recent months. Certainly, Apple’s gains have been impressive – and in the wake of them, it still ends up with one of the lowest price/earnings ratios (a mere 15.5) and a reasonably attractive dividend yield that only four of those 13 other companies can beat. But it’s a reminder to investors that it is quite possible to build a market-beating portfolio without feeling obliged to include the market’s 800-pound gorilla, Apple.

The Housing Recovery and Turnaround Stocks: Yup, really. Even before the data began to show significant signs of improving, a select group of stocks tightly linked to the housing industry were already providing hints of what was to come. Lennar Corp. (LEN) and D.R. Horton (DHI), both homebuilders, have generated returns of 145 percent and 114 percent respectively. Having bought a new home – or because there are some folks who still can’t get to that point – consumers also are spending on ways to make their premises look spiffier. Paint maker Sherwin Williams Co. (SHW) makes it on our list, although its 96 percent run-up has made the stock look pricey relative to the others, trading at 28.5 times earnings. Then, down at No. 11, is Home Depot (HD), with an 80 percent gain, trading at a more modest 20.3 times earnings. Fact is, housing is still more important to the economy than are iPhones.

Colored Denim and the Quest for the Perfect Sneakers: Fashion matters, it seems, and the Gap (GPS) nailed it – for a change – this year with the early introduction of denim pants in vivid shades of fuschia, orange, blue and green, to name only a few. It seems to be a trend with legs, judging on the basis of the array of jewel-tone pants on offer throughout department stores this fall – but Gap was there first. That helped it generate a return of 120 percent over the last 52 weeks. And to go with that “must have” pair of pants, what else but a coveted pair of limited-edition sneakers? Foot Locker (FL) rewarded its investors with a 90 percent return in the last 12 months – and it offers a reasonably alluring dividend yield of nearly 2 percent to boot. It’s not just the stock price that has been on a tear: The company has exceeded profitability forecasts, seen margins improve (a rare feat) and boosted its dividend in recent months.

Discount, Baby, Discount: Being on trend may be vital for consumers, but so too, it seems, is nabbing a great value. We’re supposed to call them “off price” retailers (calling them discounters apparently is akin to calling a high-yield bond a junk bond), but regardless of nomenclature, Ross Stores (ROST) and TJX Cos. (TJX) both offered their investors better returns over the last 52 weeks than did Apple, albeit with a bit less hype and scrutiny.

Plain Jane Technology: For all the hoopla over Apple’s trendy, high-design gadgets, the top-ranking stock in our baker’s dozen was the deeply boring (relatively speaking) Seagate Technology PLC (STX), which has soared more than 160 percent in the last 12 months, returning more than twice what Apple did during the same period. You may not count on it to repeat that performance over the next 52 weeks – the company recently scaled back its fourth-quarter forecasts amid signs that demand for its hard drives may be softening somewhat. Even though rivals are doing better at restoring production after devastating floods in Thailand earlier this year (that’s where many production facilities are based), Seagate remains bullish on pricing trends, arguing that capacity constraints will push the average cost of a hard disk higher.

No one may feel the need to flash their Seagate hard disk, admittedly – but try running all those electronic devices we rely on without one. Oh, and not only does Seagate have the highest 12-month return on the list, it also offers the lowest P/E ratio (below 5) and the highest dividend yield (4.25 percent) of all the contenders – something to weigh in the balance against the fact that a cluster of analysts have recently become less bullish, cutting their ratings back to “hold.”

As for the rest of our baker’s dozen, it’s a motley assortment of travel companies (online travel reservation service Expedia (EXPE) and Wyndham Worldwide (WYN), the hotel chain), industrial companies (like defense and aircraft firm Textron (TXT), maker of Cessna planes and Bell helicopters, among many other things) and at least one regional bank stock, Regions Financial Corp. (RF). Not much of a trend to spot in any of these – just a timely reminder that when the Apple hoopla and hullabaloo hits today, that Apple isn’t the only fruit – or rather, that its stock isn’t the only one from the universe of large-cap U.S. equities that you have to own at any price in order to beat the market.

This time next year, odds are that the names of the top dozen or so companies will be different, but odds are also that at least a handful of them will have done better than Apple has, simply because they’re not stocks with tremendously high expectations tied to them.

Here’s a quick look at some of the ideas that generated even heftier returns than betting on the new iPhones and iPads over the last 12 months: 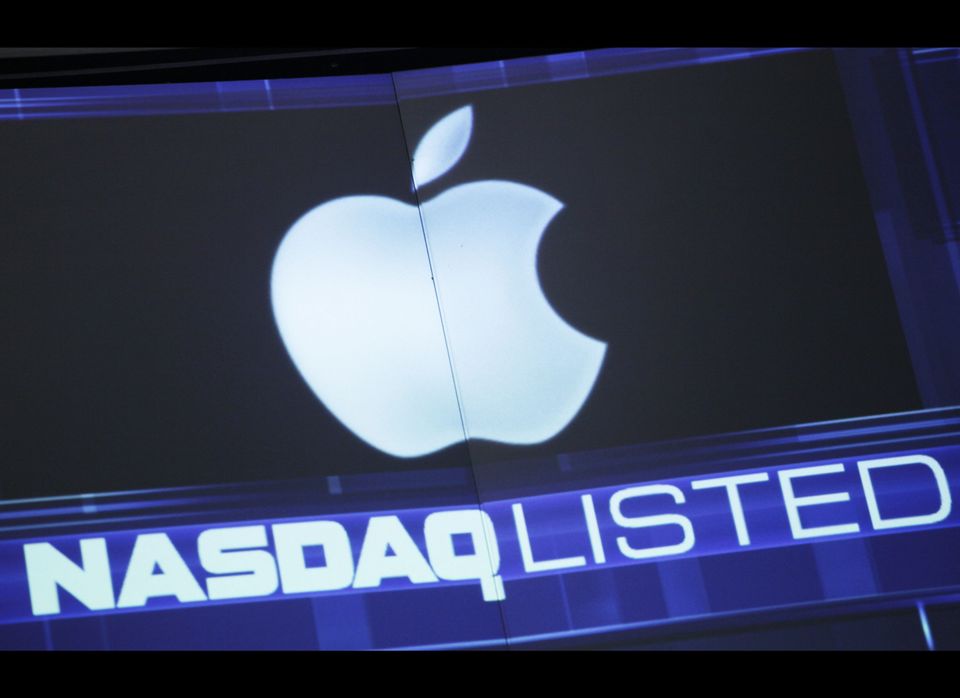