Apple shares are sinking under the weight of too many -gates.

Apple's stock price was down 3 percent on Thursday morning. This is probably because you can't fly a dead-cat-copter without hitting some story about problems with Apple's new phones and software. Here is a chart, courtesy of Yahoo Finance: 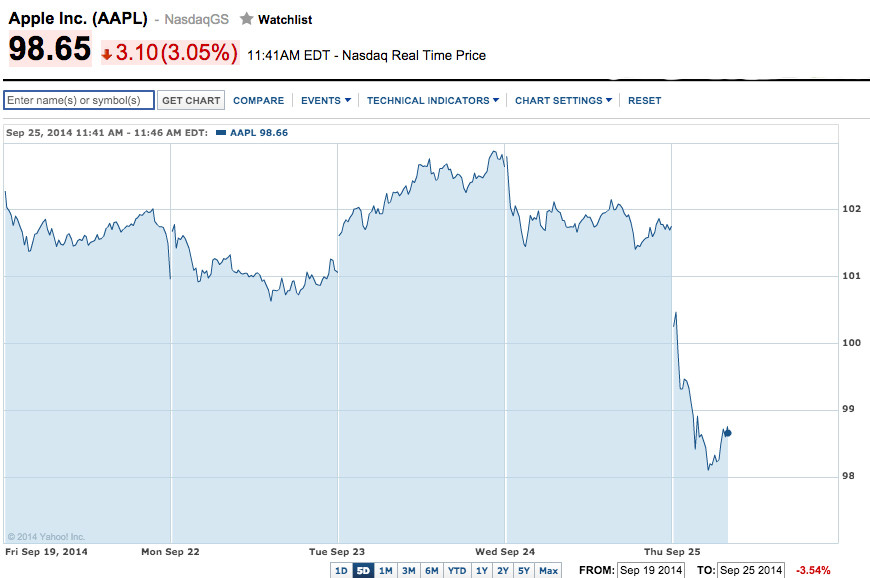 On Wednesday Apple yanked back an update for its new mobile operating system, iOS 8, after it was found to be riddled with bugs, a controversy quickly dubbed "iOS8gate" because we can never stop labeling scandals with the suffix "-gate." And the Internet is having all kinds of fun with reports that the iPhone 6 Plus might bend in your pocket -- a real bummer if you've paid nearly $800 for it. This embarrassment is known, predictably, as "bendgate." Although "bendghazi" is cleverer.

It's the worst day for Apple stock since September 3, when another mess of trouble, including naked celebrity photos getting hacked from the iCloud -- "celebgate," naturally -- sent Apple's stock price down 4 percent. It bounced back to a new record high within days. Then the floodgate of -gates opened again.

Update-gate: Apple has responded to bendgate, declaring that only 9 people have so far complained of bendy phones. This did not help the stock, which ended trading down nearly 4 percent.