Apple's stock is under a dark iCloud today.

Shares of Apple, typically a Wall Street darling, were down about 4 percent at midday on Wednesday. The hacking of naked celebrity pictures stored on Apple's iCloud storage system is the worst of a bunch of bad news that has hit the company at once, just ahead of next Tuesday's expected launch of the iPhone 6. 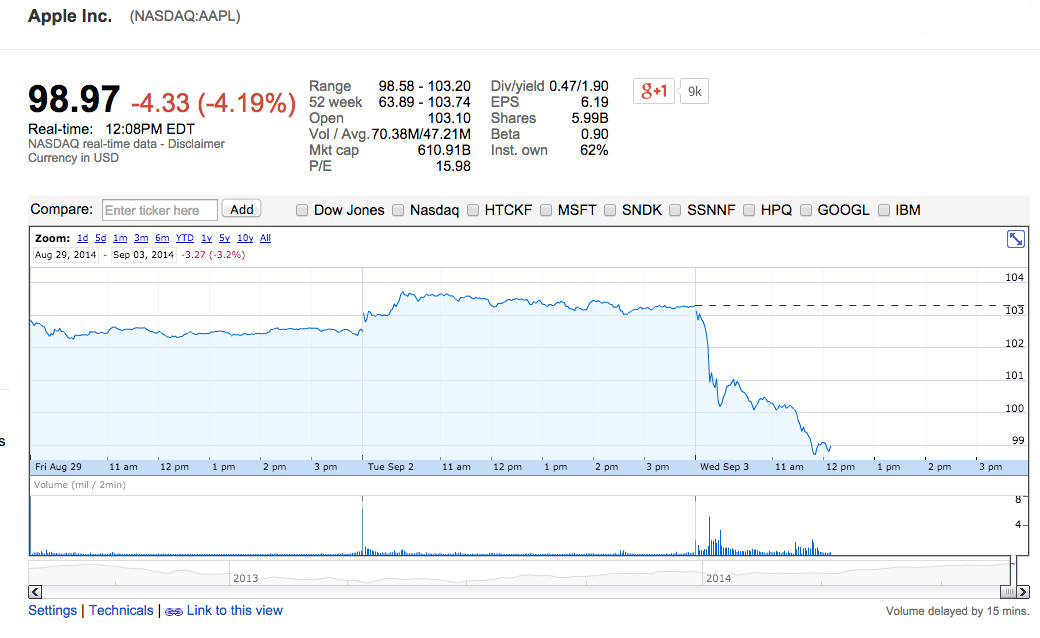 Everything hits at once. (Source: Google Finance)

New iPhone Day is typically a religious holiday in America, and Apple stock had soared to new highs ahead of it. But Apple may or may not suddenly be "in disarray," in the words of Business Insider's Jim Edwards. He rattled off a litany of problems that have cropped up just in the past few days, including the iCloud hack and a prolonged iTunes outage, that may well be making CEO Tim Cook "furious" and investors nervous.

Most analysts on Wall Street still recommend investors shovel themselves some more shares of Apple. This dark-ish day will likely be forgotten by next Tuesday, when we are all distracted by Apple's latest shiny objects, possibly including a new smartwatch. But CNN/Money's David Goldman noted recently that Apple shares usually fall in the month after a new iPhone release.

Update: The stock closed trading on Wednesday afternoon at $98.94 a share, down 4.2 percent for the day.