So here it is: my iPhone 6, bought just 13 months ago, died yesterday. This phone has had better care and handling than my dog. Never dropped, Never touched water or liquids of any kind. Never bumped or even yelled at. And you know, sometimes we do yell at dogs. Why? I don't know since their hearing is ultra good.

Anyway, I also have a gleaming new iPhone 6 plus, yada yada dada. So this is a tale of two iPhones. Both bought last October. Both humming along fine. Until little iPhone 6 just fizzled and died. It was a dramatic death. Some weird electrical pop coming from under the screen.

Then the screen went blue. Then faded to black. Forever. 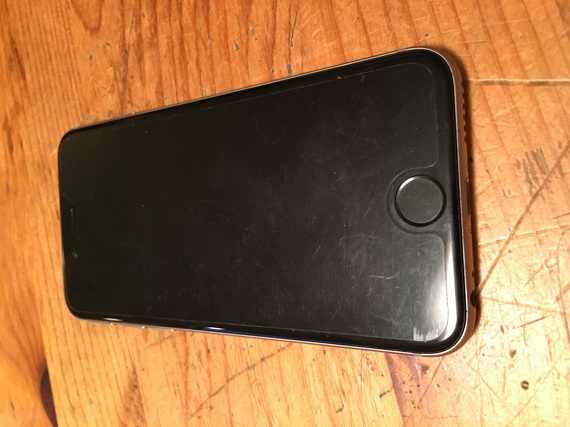 Having been in tech for awhile I know the blue screen is the kiss of death for our artificial intelligence devices we tote around or stare at all day. Should I try and fix this? Well, given that it takes special tools and a degree in Apple Karate I decided that surely Apple could fix THEIR lousy hardware.

I had high hopes that the 'Geniuses' at Apple Store's Genius Bar would be able to fix it. A new battery? Probaby just swap one in and stroll on out of the blue shirt place smiling. Right? Let's see...

So I made an appointment for 2:50 PM yesterday. Walked in and proceeded to the back of the store where the Geniuses reside under the atom logo thing on the wall. I was about to sit on a stool there when an Apple Store employee said "you can't sit there, please sit over here" and pointed to a table away from the Geniuses.

Had they known I was a fellow Jedi in tech they may have allowed me to sit anywhere. I held off using Jedi mind tricks, these being Jedi in training and all...

So I stood there just outside the IQ zone and waited. The dead iPhone 6 staring blankly at the ceiling, refusing to wimper, bark, wag its tail. Nada. Basically a brick at this point with an Apple logo on the back.

A Genius approached me at 2:50 which was good to see that they kept their appointments despite the IQ thing. (Then again, with an IQ of 180 maybe I was qualified to sit back there at the bar?).

Regardsless of brain sponge ability, atom logos on the wall, the ability to recite Einsten's 7th Law of Customer Loyalty, the Genius took my iPhone. I assured him it had never been abused, dropped on floor, toilet or other such thing. He took it in the backroom for a private interrogation.

5 minutes later he emerged and said "I've never seen such a clean iPhone inside, this thing is spotless." Then came the but part... BUT I couldn't get it ton turn on, nothing happens. Well, I didn't need a Genius to tell me that. If this was an IQ contest then clearly I won hours ago when the shiny brick didn't react to my CPR, YouTube video help, Google search frenzy, two cups of Costa Rica's finest, WTF adventure.

"Of course this had to happen just one month after the Apple warranty expired," I said to the Genius. He looked at me and said there's nothing he or anyone in the store could do to replace it. He was philosophical as one who has no financial interest in an endeavor is wont to be: "these things happen."

I mentioned to the Genius that Apple isn't the Apple it used to be -- I fondly recalled selling the Mac to help pay my way through college years back....Back when Apple was David and Microsoft was Goliath. Now Apple is the giant.... and it doesn't seem to care about its hardware dying after 13 months.... Most companies would replace an item that died like this just one month after warranty expiration -- out of sheer embarrassment if anything.

I can imagine Steve Jobs doing a demo at the Apple conference:

"One more thing... we decided to have our hardware go on the fritz just after the warranty expires...you're welcome Wall Street."

Meanwhile, Apple is busy building a spaceship campus in Cupertino where all its Geniuses can live and work and make more gizmos. I do have my other iPhone. So far it hasn't spontaneously zapped out. But the other one is done. And Apple seems to care less. Tough luck.

For all the glitz and glamour and marketing candy Apple is so good at it's a shame they don't make something that will last outside of a year. Maybe that's the Genius part here... make us buy a new one over and over and over and over....coincidence that Apple's headquarters in Cupertino, California is located on a street named Infinite Loop?