A recent patent filed by Apple and discovered by the site Patently Apple shows a clever design for a potential TV remote control that could totally render obsolete the thin black box you know and constantly lose: You simply take a photo of your TV's remote control using your iPhone, and then send it to iCloud for analysis. iCloud then sends back to your phone a working image of the remote control with all of the buttons and functions on your physical remote that you are now able to use as a replacement for your actual remote control. So, if you misplace your real television remote, you can just use your iPhone.

(Of course, if you lose both your remote control and your iPhone -- well, you have to get up and push the buttons on the TV. And maybe clean your house). 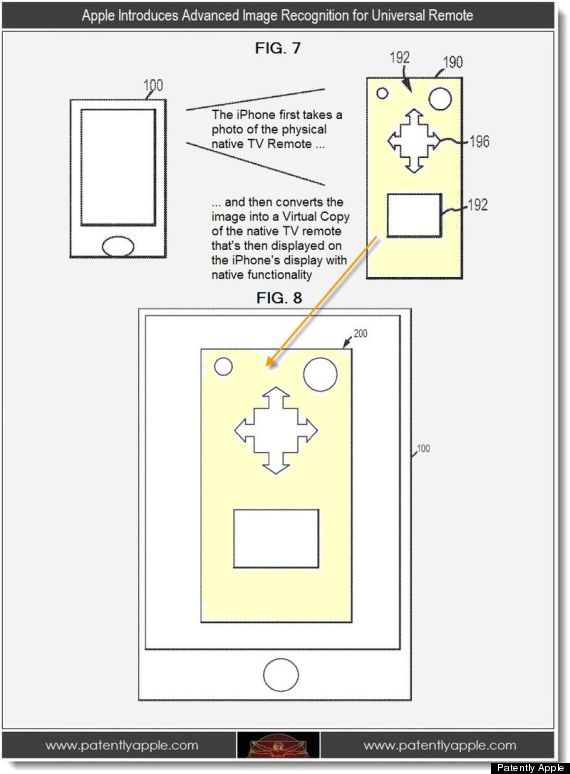 So, why is this exciting? There are already dozens of apps in the App Store and Google Play Store that can double as your TV remote control. Well, aside from offering a more full-featured, better-targeted remote control for your television, it might offer a glimpse at the mysterious television that Apple has long been rumored to be working on.

Though Apple already has a set-top box that connects to your television and accesses the iTunes Store and Netflix, the company is widely believed to be working on an HD television of its own, perhaps for release before Christmas 2012; the late Apple CEO Steve Jobs told biographer Walter Isaacson that he had "cracked" the problem with TVs, and Apple design chief Jony Ive is said to have a working 50'' prototype in his studio.

Most of the focus on how an Apple television might revolutionize the TV -- as the iPhone revolutionized cell phones, and the iPad revolutionized tablet computing -- has looked at content: Apple is rumored to be negotiating with content providers to unbundle cable channels and let users subscribe to channels one-by-one, or show-by-show. (Those negotiations aren't going well, according to the New York Post).

As for the television itself: Details have thus far been scant. Some have predicted that the so-called "iTV" will be controlled using Siri, Apple's voice-activated assistant. This isn't too far-fetched, as Samsung and Microsoft, for example, both currently offer voice control for televisions. But this new remote patent may be perhaps the first evidence of a piece of Apple's own television. Perhaps Apple will ship a physical remote control that comes with an identical app for iPhone or iPad. Or perhaps you'll get to choose your own remote control, based on the other devices in your house (the patent also covers functionality for the virtual remote to power on and off lights, lock doors, and work music players and other third-party devices).

Maybe this patent shows a neat little utility that Apple could choose to release totally separately from a television set. Then again, the company might also choose never to release it, as tech companies often file patents and develop prototypes that never make it to market. (We're still waiting on that slimmer, larger iPhone 5, for example). At this point, it's just a patent.

Take a look at the slideshow (below) for some of the coolest patents filed by Apple. We seriously want to see some of these come to market. Which would you most like to see?