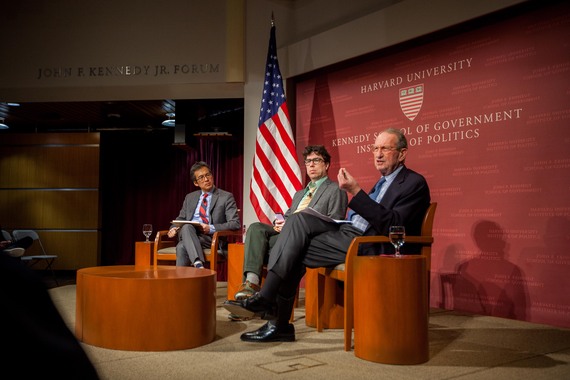 I had the opportunity to sit down with Jonathan Zittrain, a professor of internet law at Harvard, to discuss his thoughts on the controversy around the government's request for software to break into a phone belonging to a shooter, before a panel on the Apple vs. FBI issue at the JFK. Jr. Forum. What became immediately clear to me in talking with Zittrain was the degree to which I considered the case through the lens of my age.

The tone of Zittrain's opinion on the case was grave; the resolution will set a precedent that will distinctly alter the way in which the private and public sectors reconcile the significant power companies such as Apple, Facebook, and Google have accrued. Initially, the weighty nature of his thoughts surprised me, not because of the resolution's affect on the major tech companies' relationship with the U.S. government, but because of the power he ascribed to these mega-companies.

This case's significance, he detailed, is a product of the change in the power dynamic that exists between the private and public sectors, and it is this change that my generation has been blind to. The development of my independence was integrally facilitated by the technologies developed by such companies as Apple and Facebook. As such, the weight of the reality that the technological services offered by these companies simultaneously grant them access to such powerful data never struck me. Surely, the omnipresence of such technologies suggested that whatever potentially significant influence extensive use of the services could exercise had been accounted for. My conversation with Zittrain, however, showed me to what degree such an assumption is merely a product of youth.

When the development of the power dynamic between the public and private sectors is examined across a longer timespan than my nineteen years, the significance of the recent changes in the dynamic become more apparent. The power Apple, Facebook, Google and the like have accrued through massive popular engagement with their technologies has given the private sector a power the like of which the government has not before faced. Before the advent of the iPhone, Facebook and google.com, the most extensive popular data collection was facilitated by government agencies, providing the government monopolistic control over arguably the most powerful kind of non-violent asset. This control consolidated access to large-scale power, firmly establishing the government as the most powerful domestic entity. Now that such monopolistic control has been compromised by the emergence of the major tech companies, the government's relative power is being challenged, and private-public power dynamic has been put in flux.

The historical significance of this shift is responsible for the weight that Zittrain understood and I had previously not considered. It is a development that has significant implications for how the government will deal with the increasing power the private sector wields because of the emerging trend that technological advancement is best facilitated in the private arena. I implore those in my generation to consider contemporary developments from a broader vantage point than our lives provide, for those people at the forefront of such developments certainly consider more than the last two decades.

---
Jackson Gates is a freshman at Harvard University considering a concentration in Government with a secondary in Economics. He is in the Event Support sub-committee of the John F. Kennedy Jr. Forum Committee, as well as a member of the Harvard Political Union and Classics Club Basketball team. Born and raised in Cambridge, Jackson is also passionate about literature, counting David Foster Wallace and Ernest Hemingway as his two favorite authors.