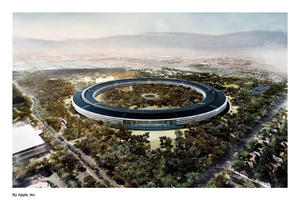 Apple is building a spaceship.

Not to be out-glassed, Google has submitted plans for its own fishbowl colossus to succeed the famed Googleplex. Facebook and LinkedIn are planning new office projects as well.

There is one thing that all of these shiny new office buildings have in common: The moment they are completed, they will be obsolete.

Among the spaceship's various eye-popping statistics -- six kilometers of glass, 7,000 trees, etc. -- there is one key metric that's missing. There is no mention of how much more productive employees will be in this office compared with the company's former bricks and mortar home.

That's probably because there is no data that suggests that Apple employees will produce more or better in their spaceship than they do at 1 Infinite Loop.

Every workday, tens of millions of Americans prepare for work, get in their cars, then sit in traffic -- sometimes for hours -- only to arrive at an office where their remaining quality work time is shredded to bits by endless distractions. In the U.S., this prep and commute ritual alone consumes approximately 10 million person-years annually -- more than the entire population of Sweden!

Once they reach the office door, employees must fight for fragments of quality time to complete their work between interruptions in one of the least productive places on Earth.

In 2005, Microsoft conducted the Microsoft Office Personal Productivity Challenge (PPC) surveying more than 38,000 people in 200 countries in order to rate workers' individual productivity. What they found was not surprising to anyone who has worked in a traditional office: While people work an average of 45 hours a week, they consider about 17 of those hours to be unproductive -- 38 percnet! A separate survey from Basex produced similar findings. Per the Basex survey, workers cited the following techniques used to avoid interruptions:

• Refuse eye contact.
• Relocate to conference room and "hide"
• Place chair [as barrier] in cubicle entrance.
• Post sign.
• Work from home two days a week.
• Work when no one else is around.
• Work offsite.
• Work from home or move to another office.
• Leave the office.

In a hypothetical professional services firm with 10,000 employees, Basex estimated the annual cost of interruptions to the firm to be a staggering $400 million! A separate analysis in Going Virtual, found that the total annual cost of the office to the business totaled over $42,000 each year per employee in hard costs, lost productivity, and absenteeism.

Why do you need an office?

It would never occur to most managers to ask such a ridiculous question. Of course businesses need an office. Why? Well, they just do. It does not matter that virtually everything that can be done in the office can be done, well, virtually.

Businesses are all about numbers. P&L numbers, balance sheet numbers, market research numbers, projection numbers. When business managers make decisions, they really like to have numbers at their back. This is true for every major expenditure except one: the office.

There is no shortage of ironies regarding management's dedication to traditional offices. One is its faith-based embrace of offices in an otherwise evidence-driven profession. Under normal circumstances, management demands evidence, particularly before making an investment decision. Yet this rigor is tossed out the window when it comes to making what is often a very expensive series of investment decisions regarding the office. Despite its expense, no facts are required to support management's faith in the office's indispensability to the business. Moreover, no facts are available -- while there are countless studies documenting the benefits of the virtual office, there are none affirming the traditional office's capacity to multiply resources.

The historian Shelby Foote once noted that the extraordinarily high casualties in the Civil War were attributable to the fact that military commanders were using old-style tactics with very modern weapons. The same is true in Silicon Valley, where there exists a fascinating inverse relationship between the sophistication of tech company products and those companies' management best practices. Indeed, many Valley employees use their very own tech companies' services virtually from the confines of their office cubicles.

General George S. Patton once said, "Fixed fortifications are monuments to the stupidity of man." The corporate citadels of Highway 101 are shining examples.