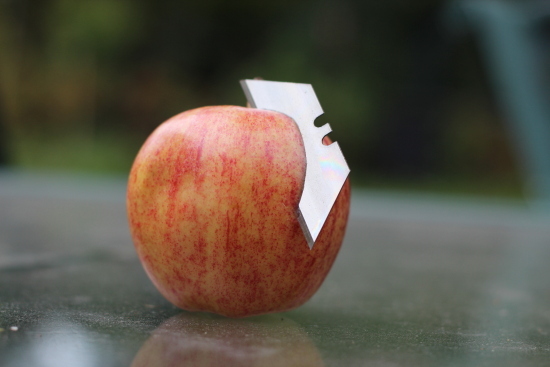 Some enterprising psychopath, according to my childhood's urban legend, decided to bury a razor blade into an apple for the ultimate Halloween trick. They were the carefree days long before candy-inspections were rivaled only by airport shoe-screenings. It was a time of unlocked doors, keys in ignitions and Baby Jesuses safe in city hall nativity scenes.

And, faster than you can say tetanus shot, one hungry kid reaches into his pillow case, pulls out the booby-trapped apple and gets an instant cleft-palate. The innocence was gone and soon Tylenol was going to find itself triple-wrapped.

I remember being warned of this creep in the same hushed tones that I was warned to floss or else end up with the gum-lines of Lon Chaney... 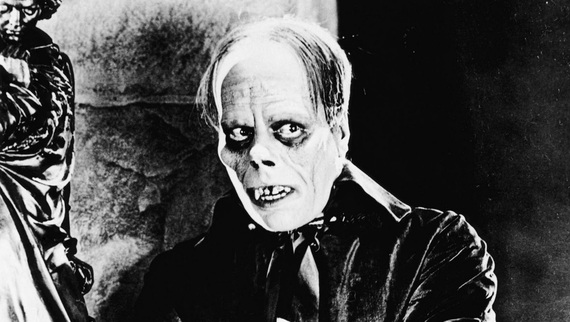 It's the only time of year that we encourage our kids to scream in the night, befriend strangers -- and even accept candy from them. It's that magical, cold, rainy school night that only gets better as the years pass. The look of fatigue, crabbiness and general consternation of the toddlers becomes a fond memory.

So, let's take a trip in the nostalgiamatic and examine this odd holiday with its terrifying implications.

1. All Guts, All Gory: Pumpkin Disembowelment 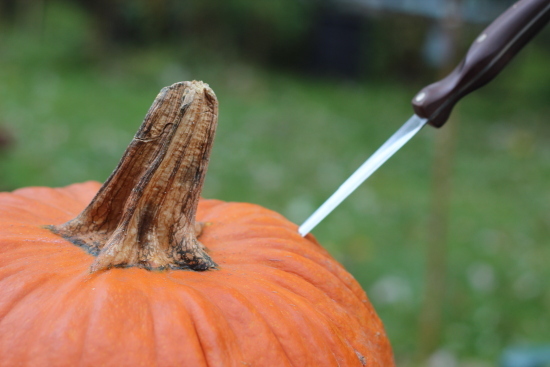 I've never enjoyed carving a pumpkin. In addition to the risky combination of a slippery surface and a sharp knife, the deal doesn't get any better. 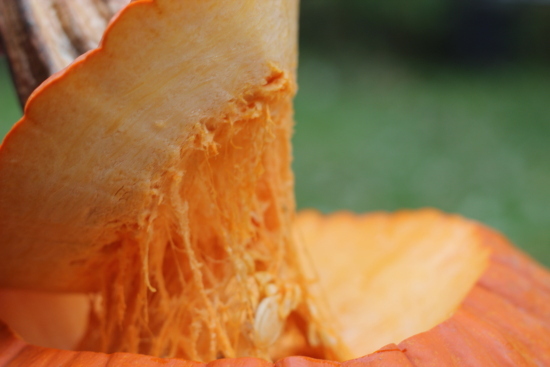 After scalping the gourd, you yank off the top and see brain-like tendrils trying to keep you from inside. Then you stick your arm into the cold slime and scoop out the walls, depositing the nasty stuff in a bowl for all the kids to see and wince at in revulsion. 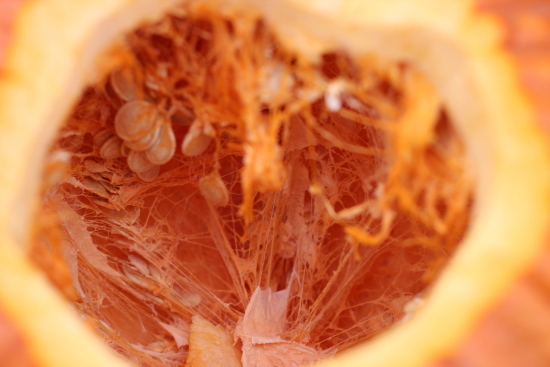 Finally, you take out a blade and attempt to craft some clever design on the most bumpy surface imaginable. 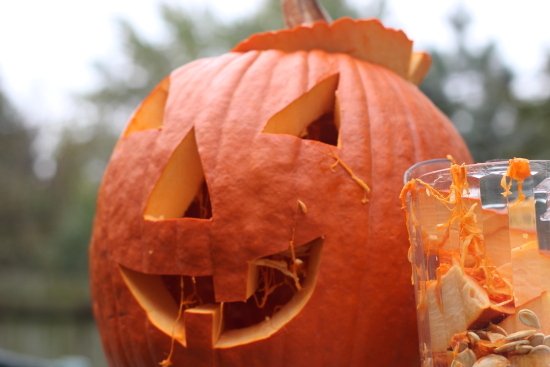 Or you revert to the traditional triangles, even then risking a quick trip to the emergency room.

In an effort to eliminate slicing off a finger, one year I decided to use a scroll-saw on our pumpkin. It was quick, but I was digging the guts out of the innards of my saw for the next three months. 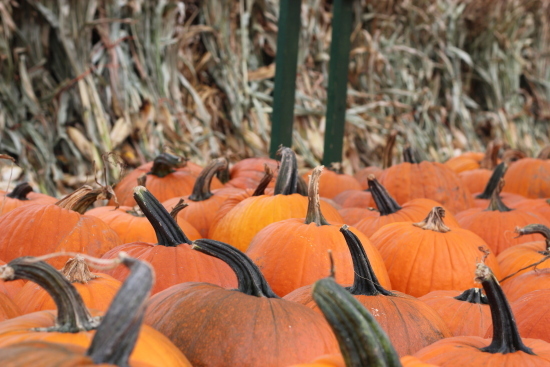 All this work to have some kid sneak up on your porch and throw your masterpiece into the street. I wanted to cut out the middle-man and toss it from the car window on our way home from the pumpkin patch. The memories might be fonder for my kids.

2. Look Both Ways -- with No Peripheral Vision 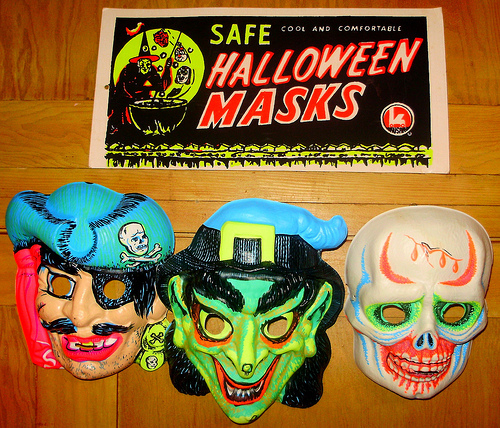 Granted, masks have changed a bit since I was prowling the neighborhood. But I can still smell the plastic toxins and feel the razor-wire elastic band cutting into my ears. Throw in a sugar-buzz, impulsive greed and a dark street, what could be sweeter?

Some of the elaborate masks that are available now leave more suffocation opportunities than an entire room of dry-cleaning bags. Yet I have to admire the teenager who wears these rubber helmets, compared to the ones who don't dress up at all, grab then go. 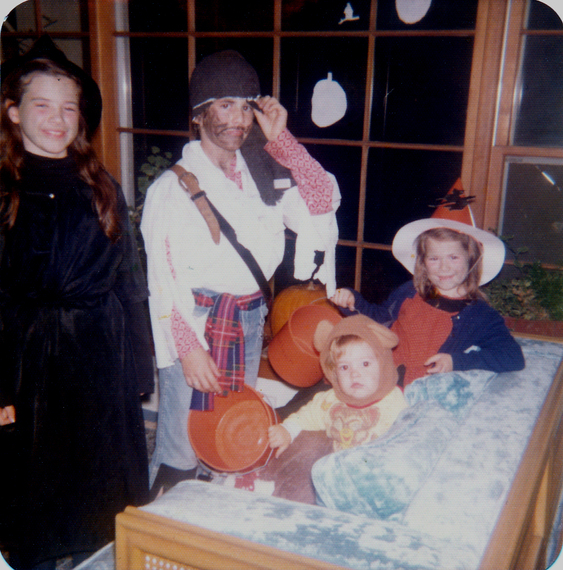 I remember the trepidation. It didn't leave me until I was 10 and needed to act like a tough pirate in front of my three younger sisters, particularly the two witches. I then watched my own kids pause, 15 feet from the strange doorstep. 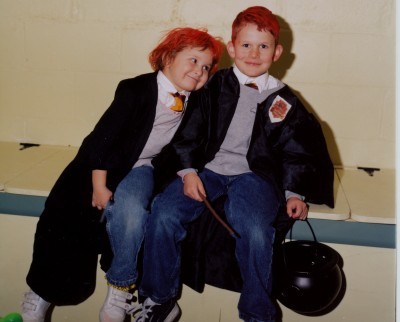 Somethings even Hogwarts can't prepare you for...

They looked at me like I'd just sold them off. Why should they walk up the dark steps on their own and ring someone's doorbell? It wasn't worth a pixie-stick -- too risky. Something terrible was certain to happen. Add in the extra flair that some folks have for making the porch even more daunting and perhaps social services should be involved. 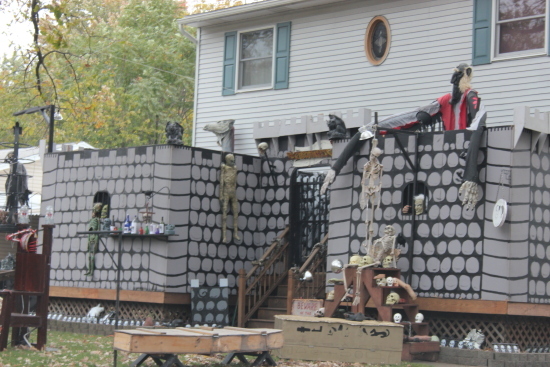 The only decorations with two-full baths...

I was torn as a parent. If I go with them up the steps am I enabling them? Will it lead to them living in our basement until their 40s? Will I be cutting their pancakes in college? Better to let them get some terror out of the way now. Think how much easier trips to Costco on Saturdays will be for them later on.

4. Doorbell Etiquette: Be Rude To Them and They'll Be Rude to You.

It's not enough to pound on the door or even ring the bell, we encourage our kids to scream as well. I remember thinking that it was a bit redundant, since most of our neighbors knew why someone was a-calling on October 31st, but you had to jump through the hoops to get the goods.

Like some Masonic hazing if you didn't say the password you were bound to run into some guy who demanded protocol. "Now, what do you say?" as he held the Snickers out of reach like a dog-treat. Then you might get the real sweethearts, who like Sgt. Carter, might add, "I can't hear you!" From the safety of my sidewalk, as my helpless kids endured their inquisitor, I wanted to quote my other favorite military hero, Stripe's Sgt. Hulka.

But instead, I smile politely back at the same neighbor I only know from friendly waves during lawn-mowing season. And it's him I worry about as he unfairly judges my parental neglect.

Somewhere after World War II, the penny lost its Halloween charm. Somewhere past kindergarten, kids began to realize they were being chiseled. Yet we urge our kids to thank the tightwads as word spreads quickly down the street about the Rockefellers at 2412 who are handing out real candy bars, not the "fun-size." And the race begins as the penny/Zagnut homes are abandoned. 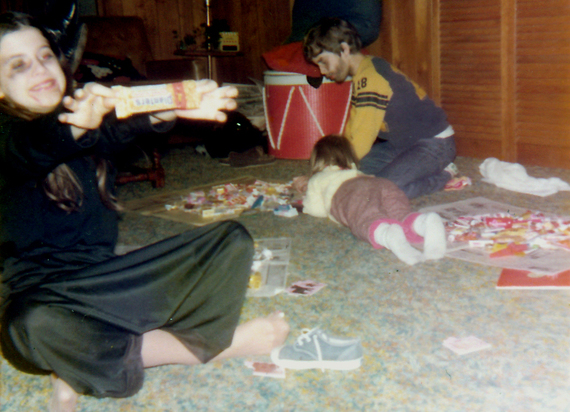 And, like a grade-school kickball selection process, the ruthless sorting of candy on the floor allows your children to realize that their two hours of hard work resulted in runny noses and four pounds of candy they'd probably not pick out in the checkout aisle -- even if you were paying. So the piles are divided with the good, bad and ugly clearly created.

But the night becomes magical as the kids outgrow the teddy-bear costume. And likewise, probably by mid-July, even that black licorice might be eaten.

This was originally posted in Kevin's blog at MyMediaDiary.com.