(I've always wanted to say that.)

A brilliant new opportunity to salute a peer arises via the U.K.'s University of Kent, which this spring launches its Innovation in Academia Award. Applicants are currently being sought for the distinction, which (I quote), "will honour an individual whose professional accomplishments have made a significant and lasting impact in the field of higher education, and whose work and character have earned the respect and admiration of their professional colleagues."

Look sharp, as the deadline for applications is this coming Monday, the 9th of March, 2015. The application process is further explained here. Nominations are open to those who are from or who have studied in Europe, and are currently working, or have worked, in American higher education. 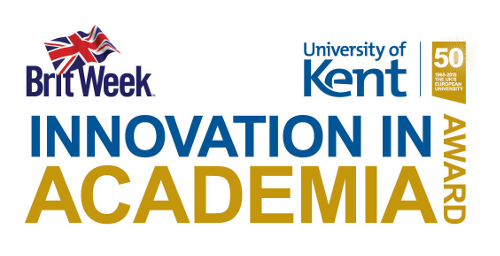 The Innovation in Academia Award will be presented at the Skirball Cultural Center, between 1 and 3 May, coinciding with Kent's 50th-anniversary alumni celebrations in Los Angeles, in conjunction with BritWeek. Kent, a strong and regular presence in Los Angeles and around the world, is a proud sponsor of BritWeek, and the first U.K. university to sponsor a BritWeek award.

Celebrating creativity and innovation between the U.K. and the U.S.A., BritWeek was formed as a non-profit organization in Los Angeles in 2007, thereafter expanding to include events in Orange County, San Francisco, Miami, and Orlando -- generally places in America where Brits congregate to observe the phenomenon colloquially known as "sunshine." BritWeek hosts numerous events open to the general public, with a focus on British contributions to film, fashion, music, the automotive industry, and science.

This year's Innovation in Academia winner will be announced at the event by the University's Vice-Chancellor, Professor Dame Julia Goodfellow. Kent alumnus and two-time Pulitzer Prize-winning editorial cartoonist and columnist David Horsey, currently a political commentator with the Los Angeles Times, will host the ceremony.

As noted above, 2015 sees the University of Kent celebrating its 50th anniversary -- a spring chicken to some, perhaps, but indeed a formidable chicken: Known as "the U.K.'s European university," Kent includes nearly 20,000 students, ranging across the U.K., Belgium, France, Greece, and Italy. Kent has been ranked: top 10 for overall student satisfaction in the 2013 National Student Survey; 20th in the 2014 and 2015 Guardian University Guide; 28th in the Sunday Times University League Table in 2013; and 22nd in the Complete University Guide, 2015. The University of Kent received its second Queen's Anniversary Prize for Higher and Further Education in 2014.

(Kent is cool. I studied there. One of my life's best choices.)

Hurry. The March 9th deadline whooshes toward us. Though many academics are eligible for this award, only one will be the first to receive it.