As the Gulf of Mexico enters year three of the BP Deepwater Horizon oil disaster, I'm reminded of the two years I worked on response and restoration efforts following the Exxon Valdez oil spill in Alaska.

Climbing the rope ladder that dangled from the side of the grounded Exxon Valdez and looking down at a sea covered by thick, stinking crude oil, I knew the spill would have devastating impacts. The supertanker had crashed into Prince William Sound's Bligh Reef a few hours before, and more than 11 million gallons of oil had gushed from its damaged hull.

The view from the deck of the Exxon Valdez was grim. The slick was huge; birds and other wildlife were covered in oil, dying; and hardly any containment effort had begun. The spill would kill an enormous number of animals -- seabirds, bald eagles, sea otters, seals and whales. Fishing and tourism economies would suffer severe damage, and communities would experience tremendous stress.

Among the lessons from that disaster two decades ago, three stand out as lessons that should be applied to our efforts in the wake of the BP oil disaster in the Gulf. 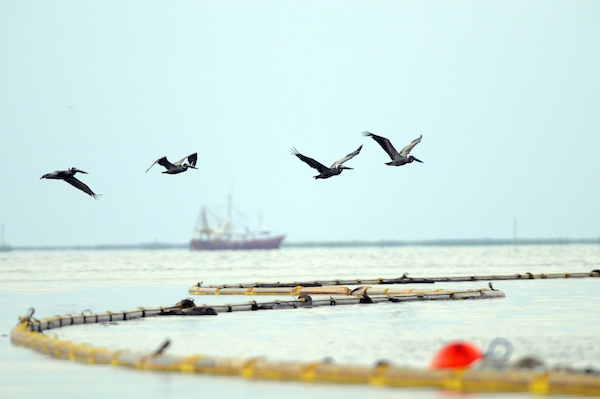 First, containment and removal of oil from the water will work only if the plans are realistic and the equipment and people to operate it are nearby and ready to go. The response to the BP Deepwater Horizon tragedy failed that test; only a small percentage of the spilled oil was removed from the Gulf of Mexico.

There is no chance to replay those events, but there is still an opportunity to apply the other two lessons. That is, effective restoration requires carefully chosen projects -- based on clearly stated and consistently applied criteria -- that address three targets: coastal environments, offshore marine resources and local communities that depend upon the ocean for fisheries and other benefits.

The final key lesson is that monitoring and long-term science are not only essential for wise choices and good results, but the scientific work provides real benefits that have lasting value.

In the Exxon Valdez aftermath, some harm was not even detected until long after the spill had occurred. In the area where the spill began, for example, the crash of the herring population -- an important commercial fishery -- was not documented until four years later. And field surveys made the unexpected discovery that toxic, liquid oil remained in the beaches of Prince William Sound two decades after the spill.

Studies conducted using some of the Exxon settlement money enabled changes in fishery management that provided real, continuing economic benefits to fishermen. Some of the settlement money also supported long-term monitoring in the spill-affected area, and the value of that work has been demonstrated many times over.

When the litigation from the Deepwater Horizon tragedy is finally resolved, two major sources of restoration funding will be available: the Natural Resource Damage Assessment (NRDA) money -- addressing only the environmental damage from the blowout -- and the federal RESTORE Act, which authorizes 80 percent of penalties under the Clean Water Act for specific purposes including ecosystem restoration, science and economic restoration.

The restoration chapter for the Deepwater Horizon disaster is still being written, but it will not automatically produce good outcomes. The NRDA Trustees and the Gulf Coast Ecosystem Restoration Council must adopt rigorous criteria and transparent processes to ensure their decisions provide the ecosystem benefits the Gulf and its residents need for the long-term future.

And a continuing scientific monitoring program must be funded to help us know whether to make mid-course corrections in projects and help us assess the effectiveness of the restoration program.

This moment offers the opportunity to apply hard-learned lessons. It's time to make wise choices to support a healthy future for the Gulf ecosystem and the people who depend upon it.