In his State of the Union address, President Obama called for "more apprenticeships that set a young worker on an upward trajectory for life." I couldn't agree more, because I've seen firsthand the success of apprenticeships at companies across the nation in my first six months as secretary of labor. One example is Tampa Electric: I knew the minute I walked in that this was a model from which others could learn.

Tampa Electric apprentices make around $32 per hour while mastering the electrical journeyman trade, with the opportunity to gain college credits at the same time. They earn while they learn, and once the program is complete, they can do a variety of electrical-related jobs. Average starting salary: $70,000 a year, plus the potential for overtime. 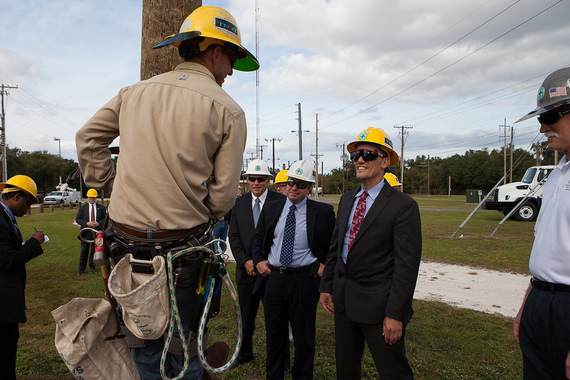 Secretary Perez talks to Jonathan Sanchez about challenges of power line maintenance during a visit to Tampa Electric Nov. 14, 2013.

Tampa Electric has used apprenticeships since 1978 to make sure its workforce is the best in the business -- trained, prepared and productive. Apprenticeships improve its bottom line and give the company a competitive advantage.

Apprenticeships are a particularly effective way to create career pathways with upward mobility and strong earning potential. Because apprentices receive a paycheck, it's a great option for those with families to support, including many veterans.

Clearly, apprenticeships are a win-win: They provide workers with sturdy rungs on that ladder of opportunity and employers with the skilled workers they need to grow their businesses. And yet in America, they've traditionally been an undervalued and underutilized tool in our nation's workforce development arsenal. The United States has only 360,000 apprentices, while Germany, one-third of our size and a prominent competitor in the global marketplace, has more than 1.8 million apprentices. Our competition is investing in apprenticeships at nearly six times the rate we are. That's why, as the president proposed, we need to make apprenticeships a larger building block in our skills infrastructure.

And they shouldn't be limited just to trades like construction or plumbing. We're not just talking about "bakers and candlestick makers." The apprenticeship model is also working in new and emerging industries like health information technology and mechatronics.

Apprenticeships are a sound investment in a strong workforce and a growing economy, and I'm pleased that the president is taking further steps to promote them.

Read more about Secretary Perez's visit in the Tampa Bay Times and the Tampa Tribune. Follow him on Twitter as @LaborSec.