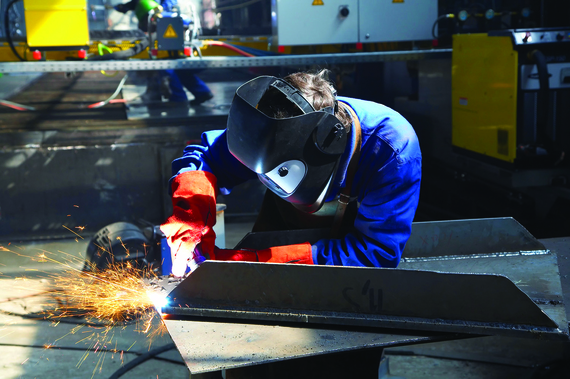 Apprenticeships, where young people learned skills on the job from a master craftsman such as a stone cutter, have been around since the Middle Ages. An apprentice would earn while he learned and often lived with the journeyman providing the training.

In the early days of this country, apprentices were indentured servants. Ben Franklin was an indentured servant to his older brother, who taught him the printing trade. The advent of the Industrial Revolution brought with it a greater demand for skilled craftsmen and most of these workers began their careers as apprentices.

Today, it is community colleges that are proactively creating apprenticeship programs that lead to well-paying jobs in the factories of the future, where proficiency in computer science has replaced the repetition of the assembly line. They are looking for opportunities to implement curricula with local manufacturers to train their workforce, many of whom have decades on the job, in the skills that will see them through the rest of their careers.

In 2014, the U.S. Department of Labor announced $175 million in grant opportunities that would fund apprenticeship programs in high-growth industries such as health care, advanced manufacturing and information technology. Apprenticeship programs are one surefire way to revitalize the middle class, and with it, the American Dream.

Today's apprenticeship programs are based on a successful German model where high school students opt to work while they learn in return for a highly skilled factory job when they complete their apprenticeship. Replicating the German apprenticeship system in the United States requires a cultural shift. We view late adolescence as a time of exploration, and higher education to be broad and inclusive, when it's often more appropriate to be instilling skills that will launch a lucrative and satisfying career.

Apprenticeships are more narrowly defined than a liberal arts degree, but at a time when student debt exceeds $1.2 trillion we need to explore other avenues and focus more on employment opportunities, which apprenticeships provide, rather than clinging dogmatically to a belief that everyone should attend a four-year college. The Department of Labor estimates that 87 percent of apprentices are fully employed after they finish their programs, and the average starting salary is $50,000.

By contrast, the average starting salary for someone from the class of 2014 with a fresh liberal arts/general studies degree was $29,000 according to the Georgetown University Center on Education and the Workforce.

German companies such as Siemens with plants in the U.S. were among the first to institute the German apprenticeship system in communities where they have a presence.

Siemens pays for its apprentices to attend Central Piedmont Community College while working at its Charlotte, N.C., plant. Students split their time between the classroom and the Siemens factory that builds steam and natural gas-fired turbines for power plants around the world.

The apprenticeships follow a rigorous curriculum that leads to an associate's degree in mechatronics, a hybrid discipline created by Japan and Germany that melds the basics of mechanical engineering, electronics and other relevant areas.

Students coming out of this program can program, operate and fix machines common in the factories run by Siemens and other top companies. These are jobs that cannot be shipped overseas. Siemens estimates that it costs around $160,000 for it to train an apprentice. This includes tuition, books and wages paid during the three-and-a-half year program.

Other German companies have instituted apprenticeship programs at their U.S. plants. The Volkswagen Academy at Chattanooga State Community College in Tennessee is a three-year program that combines five semesters of academic and practical training with four semesters of paid, on-the-job training. Students are taught at the state-of-the-art Academy adjacent to the VW's plant in South Carolina. BMW and Bosch also have plants in Tennessee and run similar apprenticeship programs.

But it is not just German companies that are instituting apprenticeship offerings in conjunction with community colleges. American manufacturers are also creating these programs.

Kellogg Community College in Battle Creek, Mich., has apprenticeship programs that are sponsored by local companies, at which prospective students apply for an apprenticeship position. The programs are generally four years long and consist of 8,000 hours of paid on-the-job training and a minimum of 576 hours of related classroom instruction. There are programs in machine technology, industrial technology, electricity and electronics, among others.

Tidewater Community College in Norfolk, Va., has a unique apprentice program with the Norfolk Naval Shipyard. Apprentices are employed with a salary range of $13.84 to $15.26 per hour and receive promotions upon successful completion of program requirements. Students participate in a rigorous training schedule that combines academic classes at the college along with trade theory training and on-the-job experience. Honolulu Community College has a similar program with Pearl Harbor Shipyard.

In Indiana, Ivy Tech has apprenticeship programs with the Indiana Union Construction Industry, where students receive approximately 2,000 hours of on-the-job training and a minimum of 216 hours of classroom instruction every year. First-year union apprentices earn about the same amount that most college students pay for a year's tuition. Graduates can earn up to $60,000 annually. There are programs for boilermakers, bricklayers, carpenters and electricians. In addition, Ivy Tech works with local manufacturers such as Chrysler, ALCOA, Rolls Royce, and Cummins, among others, to educate these companies' future workforce.

Most apprenticeship programs require students to take rigorous national certification exams so they can work at any manufacturing facility in the country with their degree or certification.

If people knew the facts, we could change the mindset in this country that everyone should receive a four-year degree. Many parents, particularly those who didn't attend college, want more for their children than a job in a factory. But perhaps that is exactly what it best for a particular young person. And as a country, having enough people trained in the skills that apprenticeships provide could keep many jobs from going overseas. We should commit ourselves to apprenticeship programs. As one student said to me: "Apprenticeship was my golden ticket to the middle class."