I know that may seem like an edgy, unpopular opinion nowadays especially with the--what is the count at now?--approximately quarter of a million films Marvel has put out since 2008. Not that I'm saying there's anything wrong with those films; I love them for what they are. I'm saying that preferring DC over Marvel is like preferring The Rolling Stones when The Beatles were a thing in the '60s, or preferring Killzone when Halo was at its height, or preferring Dota 2 over League of Legends, or having a Zune as opposed to an iPod, or preferring Franzen over Wallace*. You get the idea--just pick your simile.

But for me, DC Comics just scratches an itch that Marvel can't. I've always formulated it thusly: Marvel tells stories about flawed people trying to be perfect, while DC tells stories about perfect people trying to be flawed. I know that sounds reductive, but I think it's pretty applicable to a good number of characters in each company. The point is, if I wanted to read about what it's like to be flawed, I'd just take a good, long, hard look at my life as it is. I hate it when my fiction is too true to life.

So that's why I have a personal investment in the DC Cinematic Universe's success--or more specifically, Batman v. Superman: Dawn of Justice's success. I've been following the film's development pretty closely, and I've seen both trailers put out so far about half a million times. That being said, I've seen some red flags go up. Here are (approximately) four reasons why Batman v. Superman could potentially suck worse than Frank Miller's All-Star Batman & Robin. 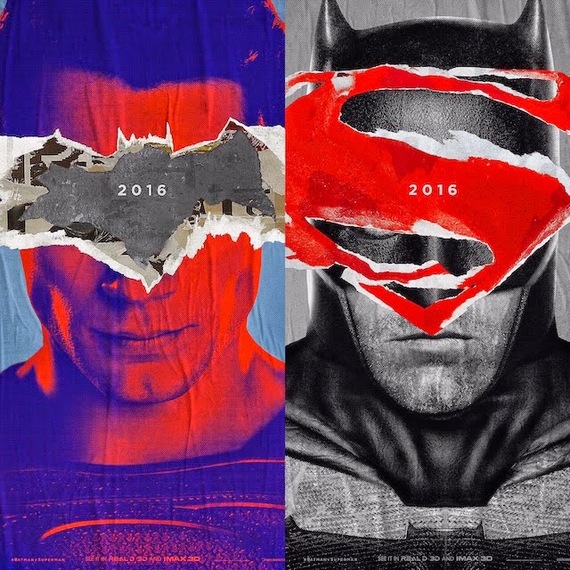 1. Having too much action without context

For all of the things that Man of Steel got so incredibly wrong, one of things that it did get right was its action sequences. When you finally watched Superman and the other Kryptonians finally fight, you could feel the actual weight of their strength and the fragility of the world around them. But the reason why these action sequences weren't enough to hold the film up was that the context surrounding these fights were so weak. I didn't care about Superman as a character at that point in the movie because the narrative did such a bad job at establishing his motivations; and if I didn't care about Superman, I definitely didn't care about who he was fighting. None of the scenes from the farm and none of the scenes from his childhood even remotely got me invested in him as a character. It simply won't do for a film to funnel the audience from action scene to action scene without developing what's going on in between, cf. Revenge of the Sith's climactic fight scene.

I fear that BvS is going to fall into the same trap. I mean, it's in the title itself: Batman v. Superman. The entire reason we're going to go see the film is that we want to see Batman and Superman kick the shit out of each other. My fear is that so much attention is going to be placed on the main event with so little on the development of the characters and the build-up. No matter how cool the visual effects or the choreography may look, the audience isn't going to care if the plot sucks and the characters are underdeveloped.

2. Trying to fit too many things in one film

For Marvel's cinematic universe, you could really tell that Marvel Studios took its time in building it. Iron Man proved to be an extremely solid foundation upon which they built, effectively establishing the tone, setting, and shared world of these films. Then the studio followed it up with The Hulk (2008), another Iron Man (2010), Thor (2011), Captain America (2011), and then capped off Phase 1 with the hugely successful Avengers (2012). What is worthy to note here is that this entire process took four years, from 2008-2012. One of the reasons why The Avengers was so successful and satisfying was that the studio had the time to build up to it so painstakingly.

In complete contrast, the DcCU is essentially relying on one film to do almost the same amount. Whereas the Marvel films had short, unobtrusive, post-credits scenes that merely hinted at future films, BvS will try to weave the rest of the universe into the narrative itself. They're trying to cram in Superman, Batman, Wonder Woman, Aquaman, Lex Luthor, possibly the Joker, and now Cyborg into one film. With so many things to establish in one film, the narrative is going to be spread incredibly thin. The challenge then will be juggling all of these narrative strands and character introductions while at the same time having something cohesive and focused.

While I appreciate the fact that the DcCU wants to differentiate itself from the quip-driven MCU by having a more "realistic" and darker tone, they may fall into the trap of taking it too far in BvS. The darker tone of Man of Steel was so overbearing and so pervasive, that it actually became constricting. The attempt to make a darker comic book movie came at the cost of the characterization. Clark was sullen, angsty, and at times, bland -- a far cry from the boy scout who represents "Truth, Justice, and the American Way." While I get that the film was about introducing his character, by the end of it he wasn't even that much closer to the Superman we're familiar with. All he did was learn how to use his powers and kill a guy.

So I fear that when the heroes in BvS do awe-inspiring things, like fly, save people, and fight crime (or fight each other, whatever), they're going to do so without the enthusiasm, conviction, and personality that make superheroes interesting. "Darker" and "more realistic" don't necessarily have to mean completely bleaching all the life out of the film.

I was so crestfallen when, in the second BvS trailer, I saw a brief glimpse of Batman's parents being killed (2:28-2:30), but not for the reason you might think. I don't mean to seem insensitive here, but I was crestfallen at the idea of having to sit through yet another Batman origin story. I was really hoping that we could get a film that wouldn't have to explain Batman's origin and that we, as an audience, could just roll with the fact that there's a dude in a bat costume going around punching people at night, no explanations needed. Is there really anybody in the world who doesn't know Batman's origin story anyway? Y'know, how he got bit by a radioactive bat and found a space-ring (or something)?

After an entire trilogy of Batman movies, which ended really not too long ago, I can already feel a certain case of Bat-fatigue. Come on--we already know who Batman is, we already know who Alfred is, let's just keep it rolling. The best way that BvS could address Nolan's trilogy is by almost ignoring it completely--by not treading the same ground and bogging the film down with redundancies.

5. Not having enough Asian-American actors

Hahahaha, just kidding. I'm not writing that kind of post.

...No, but seriously though.

*Don't worry this would never happen.