On the morning of April 27, 1953, President Dwight D. Eisenhower declared war on homosexuals.

In one of his first official acts after taking office, Eisenhower issued Executive Order 10450, which banned gay men and lesbians from working for any agency of the federal government.

But that wasn't all. The president ordered all private contractors doing business with the government to fire their gay employees, as well. And he urged our allies overseas to conduct similar purges in their countries. 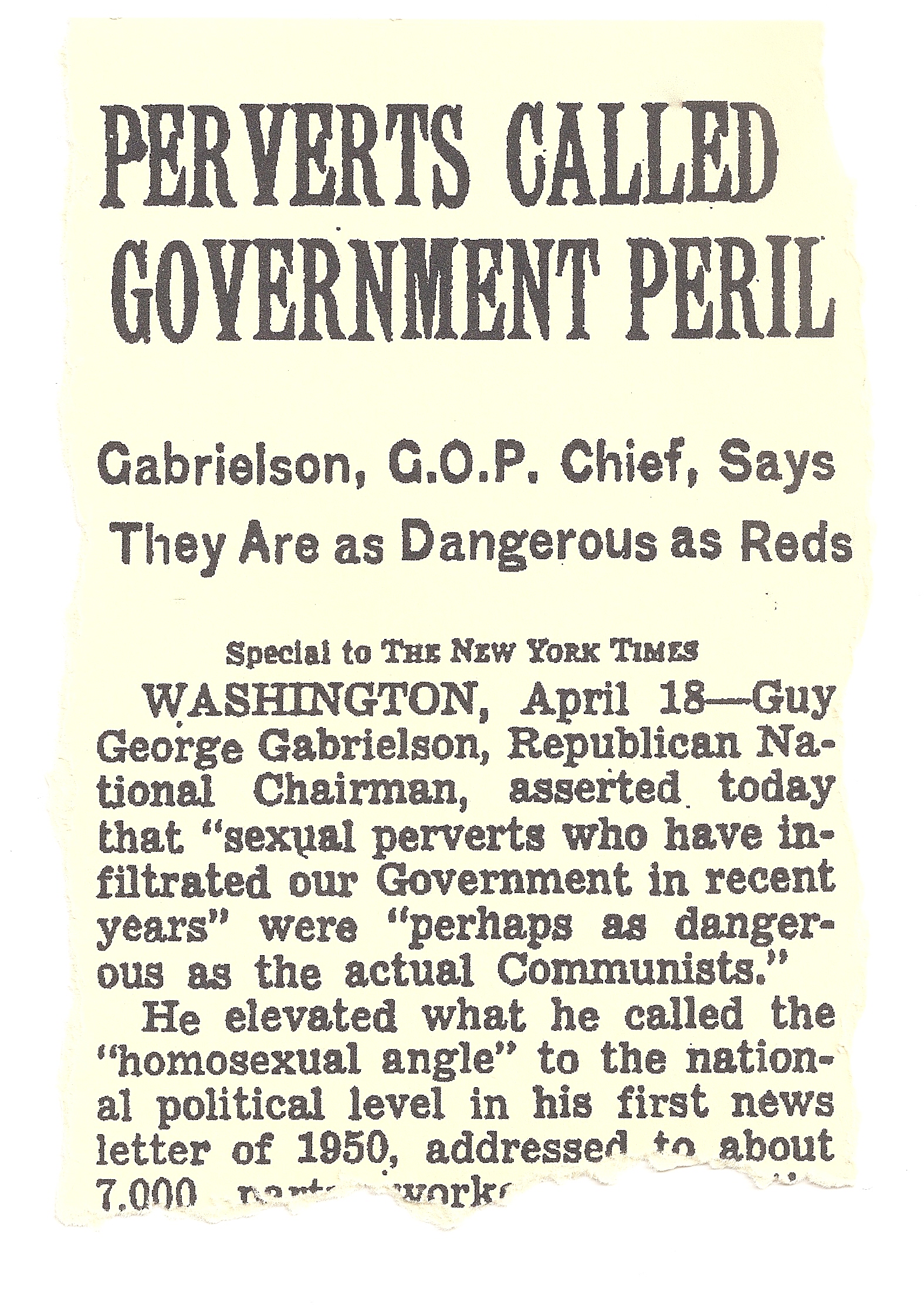 The rational was that "perverts" -- the word The New York Times freely used as a synonym for homosexuals -- were a threat to the security of the country because their immoral lifestyle left them susceptible to blackmail by foreign agents, who would presumably induce them to reveal sensitive government information in exchange for avoiding exposure.

The McCarthy era is widely known as the time of the Red Scare, the search for Communists who had supposedly infiltrated American society. But in fact it was homosexuals who were the primary victims of the witch hunts. In what has become known as the Lavender Scare, thousands and thousands of people were fired from their jobs simply because of their sexual orientation.

The anti-gay frenzy ignited by the government did far more than just deprive these men and women of jobs; it drove many to suicide and cemented homophobic stereotypes that persisted for decades in the American consciousness.

Unfamiliar with this story? It's not surprising. It's a classic example of how LGBT history is so often marginalized and not included in the telling of mainstream American history. The extent to which gay men and lesbians were victimized by the U.S. government was first brought to light in a terrific book called The Lavender Scare, by historian David K. Johnson. I'm now working on a film documentary based on the book.

Sadly, the ghost of the Lavender Scare continues to haunt us today. A recent study by UCLA's Williams Institute found that 27 percent of LGBT people said that they had been harassed at work or lost a job over the course of the past five years because of their sexual orientation. In 29 states LGBT Americans still have no legal protection against employment discrimination.

With the stroke of a pen, President Obama can take a big step toward changing this by issuing an executive order that would require private firms doing business with the government to prohibit employment discrimination on the basis of sexual orientation and gender identity in their companies -- in effect, the exact opposite of what President Eisenhower did on this date 59 years ago.

But rather than taking this decisive action, President Obama has chosen instead to do nothing. On April 12 the administration said that the president wasn't ready to move forward with the executive order. It's odd. He has already endorsed federal legislation (which has been stalled in Congress for years) that would outlaw LGBT employment discrimination. And since last fall he has signed executive orders on a number of issues, arguing that "we can't wait" for legislation that the Republican-controlled Congress refuses to pass. So why is it that he apparently can wait when it comes to protecting the rights of LGBT Americans?

Today, a great percentage of government work is outsourced to private companies. Those businesses are required by an existing executive order to prohibit discrimination based on race, national origin, or religion, but not sexual orientation or gender identity.

In 1995 (not that long ago!) the last vestiges of President Eisenhower's Executive Order of 1953 were finally done away with. But its destructive effects linger on. By taking action now to extending workplace protection to LGBT Americans, President Obama has an opportunity to make clear that the dark days of our government's officially sanctioned homophobia are finally behind us.

For more about the film, check out our website, thelavenderscare.com. Here's a trailer:

Producer and director, 'The Lavender Scare'