Today I got the date of my mother's death wrong. She died on April 12, 2010, but in my head, today was that day. My daughter pointed my error out to me on the phone. I was astonished that I had mistaken the day. Letting Mom go was excruciating, but one of my daughters and I were there with her, as was my sister and her daughters. While we wept, there was joy, too, and reminiscing and release from the pain and frustration that gripped her. It was too soon, but she couldn't speak, and we all understood that a life without the ability to communicate would have driven her crazy. Out the windows of the rehab center to which she had been admitted to recover from some sort of stroke, there were daffodils, shivering in the chilly spring temperature.

It is T.S. Eliot who reminds us that April is the cruelest month: memory and desire, days full of promise and regret. The brave daffodils open, but the sun is not yet warm. And today feels full of longing and sorrow, all mixed together, loamy.

Perhaps the day got mixed up for me because all week I've been thinking about a beloved student in our school who died three years ago. She would have turned 20 this week. I remember so well her birthday party sophomore year -- it was at the Viking cooking store. I can tell you exactly what my daughter, her good friend, wore that evening. Strange that that particular night is lodged in my memory. What sticks and what doesn't? What do we wish we could forget and what moments do we hope to remember? Other bits about her kept swimming up today -- the way she tossed her gorgeous mane of hair, her laugh, her friendship with my daughter, her knee surgery, her sass and class, the black feather mask she wore at our daughter's bat mitzvah. There are times, at school, when I see her in my mind's eye, turning the corner, appearing at my office door for candy. She loved Swedish Fish.

Some months after she died, one of her classmates sat with me and said, "I think I'm going crazy, Ms. Klotz. Sometimes, I think she is just away, that she'll be back." And I remember thinking, "Me, too." We can only take sips of sorrow -- at the start.

We made a garden at school in her honor, and the other day I told the upper school girls about her, about why we have the garden. I explained that I hope, while I am Head, it will always be a contemplative space -- more like a church or temple than a spot for selfies or tanning. The only girls who really knew her are seniors now. Time passes fast in school. Soon, there will come a time when only adults remember her. I was glad to speak about her, though my throat got thick with tears. I didn't want the girls to worry about me, just to understand that grief spools out, that it's a rare day that I do not think about this young woman so many people loved and feel an ache. I want them to know that we are allowed to be sad, that feelings ebb and flow forever.

And to mix it up some more, it was just National Sibling Day, a day I did not know existed until, wasting time, I began to scroll through Facebook and discovered it's a thing. So, that made me melancholy because a long time ago, my brother died. That's an old grief that doesn't come up so often any more. Occasionally, I catch a whiff of memory, a moment -- not so much about him as about the anguish his death caused in our family, for all of us. But a few weeks ago, our first cousin died, a person I did not see often, but who was a constant in the landscape of my life. His unexpected death reminded me of earlier griefs, of all the people who go missing from our daily lives, who live on only in the stories that we tell, the pictures that we discover in envelopes tucked in drawers. I knew my cousin much longer than I knew my brother. I knew the child who died in my school better than I knew my cousin. I loved my mother longest. That's not a real equation, just a feeling.

So, death happens. And the days continue to turn. And we learn how to grieve, or how to endure loss. But when my sister posted a picture of herself at the Opening Game for the Phillies, last night, all I could see was my dad in her face. He loved going to Phillies games with my sister. And I missed him, too. He died three months to the day before our mother.

I went to Jessica's garden Wednesday, stood in the wet. On one of the benches is carved this quotation: "Your absence runs through me like thread through a needle; everything I do is stitched with its color." Thank you, W.S. Merwin. For me, grief often feels solitary. Lonesome. Trembling. It is good to have memories. How terrible it would be if people we loved died and we did not miss them. The pain reminds me of the love. Death changes love, but it doesn't erase it. We've planted pansies in the garden -- flowers with tiny faces, brave enough for April. 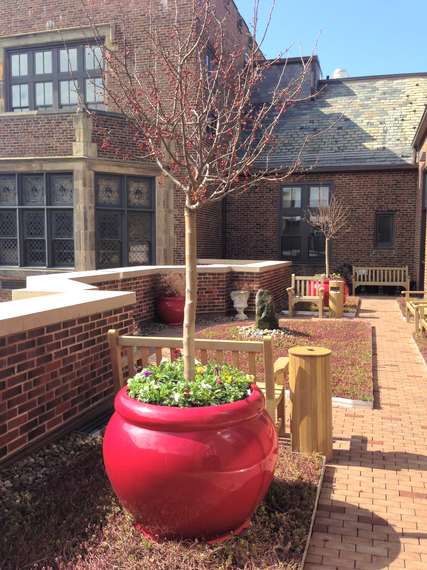