April is National Distracted Driving Awareness Month, making this an opportune time to evaluate our current efforts to change driving attitudes and habits. For years, I have met with teens across the country in an effort to educate them about the dangers of distracted driving. I have shared my personal story with them, showed them video presentations and had frank one-on-one discussions. And although these strategies have proven to be valuable in getting my safe driving message across, I've recently discovered that nothing may be more powerful in this fight than simply correcting their misperceptions about the numbers of teens who actually text and drive.

Social norms theory has been used to reduce risky teen behaviors in the context of drinking and tobacco use on college campuses. Essentially, social norms theory provides that the frequency with which a population engages in a risky behavior (e.g. binge drinking) is generally over estimated and the frequency with which that population engages in the healthy behavior (responsible drinking) is underestimated. The effect of these misperceptions can be that those who engage in the healthy behavior falsely believe that they are in the minority, while those who engage in the unhealthy behavior falsely believe that they are in the majority and that most people behave like they do. Social norm proponents argue that once the true facts are made known there will be pressure on those engaging in unhealthy behaviors to consider whether they should continue doing so, and those who have been engaging in healthy behaviors, now knowing they are in the majority, will be more likely to speak up and influence others to behave safer. See Berkowitz, A.D. (2005). An Overview of the Social Norms Approach.

So how might social norms theory be used to reduce teen distracted driving? 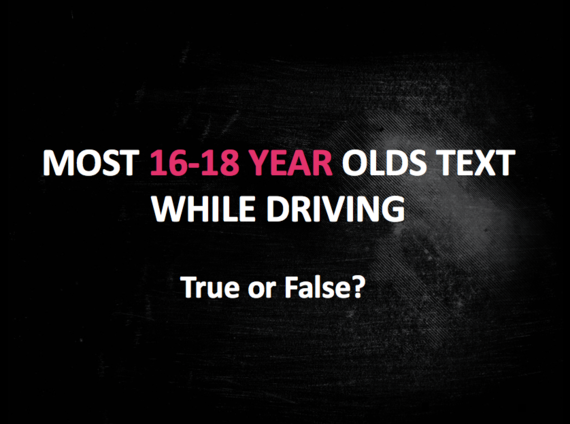 If you answered "True" you would be with the majority of teens and adults that I have spoken with across the country about distracted driving in the last 4 years. But, of course you would be wrong. The correct answer is "False." Here are the facts to correct that misperception:

Frequency of texting while driving by age group

Although 31% of 16-18 year-olds report that they text while driving, two-thirds of 16-18 year- olds do not. When teens hear these facts you can see they are surprised. By correcting this misperception we can help non-texting while driving teens to feel more confident in their choice and embolden them to speak up when other teens drive distracted. And once the texting while driving teens learn that most of their peers do not behave the way they do, they may be more receptive to thinking about changing their behaviors.

We have started using this approach in our EndDD.org student presentations and initial feedback and reaction has been positive. We will be formally surveying students to determine the effectiveness of this approach over the next 6 months. Given that teen crash fatality rates are nearly three times that of any other age group, and that recent studies suggest that distraction plays a role in about 50% of teen crashes, we need to take advantage of any science-based methods to keep teens safe.

Joel Feldman is an attorney in Philadelphia with the law firm of Anapol Weiss. After his daughter Casey was killed by a distracted driver he obtained a masters in counseling and co-founded EndDD.org (End Distracted Driving) with his wife Dianne. EndDD.org has a network of speakers across the country and provides presentations without cost to schools. Joel can be reached at info@EndDD.org.