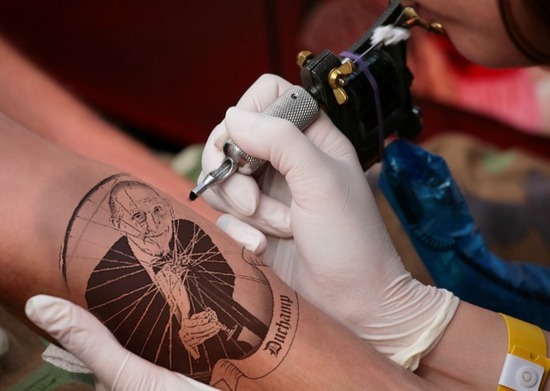 April Nordbee, a 29-year-old mother of two who lives in Swedborg Falls, Wisconsin, has found her life completely changed over the past two years, all as the result of a lucky keystroke error she made during a Google search that caused her to discover the life and work of artist Marcel Duchamp (1887-1968). Nordbee's subsequent transformation from an LVN into a nationally recognized conceptual artist has both shocked and electrified the rust belt town of 35,000 where she grew up. "April certainly has shaken us up," says Roger Ballens, the town's mayor, "but she has also put us on the map and given the local economy a real shot in the arm."

"I was doing a search for duck stamp," Nordbee explains, "and I had just typed the 'c' in duck on my computer when my 4-year-old Kevin slammed his T-Rex onto the keyboard to get my attention and BOOM up comes Marcel Duchamp on Wikipedia. After putting Kevin on his Elmo chair for a time out, I started to read about Duchamp -- Why not? I thought -- and when I saw the picture of his bottle rack I literally got goose bumps. It was like Duchamp was speaking to me personally, telling me 'Anything can be art and anyone can be an artist.'"

It was the first time Nordbee had ever heard of Duchamp -- a revolutionary modern artist who is considered the grandfather of Conceptualism -- but her interest in art wasn't anything new. Always good at drawing, a colored pencil sketch she made of a unicorn in 8th grade had earned her a second prize ribbon at a local fair, and Nordbee says that she would have either attended beauty school or art school had she not become pregnant with Cody, her oldest boy, who arrived just after high school graduation.

The years that followed graduation weren't easy ones: April and her sweetheart-turned-husband Ed had to move in with his parents while Ed learned welding at a local trade school. After baby Kevin arrived a few years later April was able to get her nursing degree by attending night classes, and the couple had been able to move to their own apartment just before Ed was laid off. "Things had just started looking up for us when Ed lost his job," Nordbee recalls, "and we didn't want to fall back on our parents again. If I hadn't discovered Marcel I don't know what we would have done."

On the day that I accidentally googled Duchamp Ed was out earning some cash doing landscaping work. My head was just literally swimming thinking about Duchamp and I wanted to find a way that Ed could share in my excitement when he came home. I called my mother, who came and took the boys to her place for a sleepover, and then I got busy quickly. I put some chicken in the crockpot, turned Kevin's tricycle upside down in front of the fireplace and lit the fire.

When Ed came home he found me buck naked sitting at a chessboard with the wheel of Kevin's tricycle spinning gently behind me. I handed him a joint and said to him: 'I need to tell you all about the work of Marcel Duchamp.' I had been thinking about how to explain Duchamp to him, but he got it right away. He knows that all the manufacturing is going to China and when I told him being an artist means just signing things and becoming famous he was right on board with it. After I made a pledge to him -- 'neither of us will ever have a real job again'-- we made love on the floor next to the chessboard. It was the most beautiful night of our lives.

The next day Nordbee quit her job at a local manor care facility and had an image of Duchamp tattooed on her left arm. The bold tattoo, which showed Duchamp behind his famous "Bicycle Wheel" was her way of letting her family and friends know that she was a new person now: an artist who was re-making her life to reflect the art and ideas of a dead Frenchman they had never heard of.

Two weeks later Nordbee entered her first readymade -- simply titled 'Blender' -- in the annual juried show of the Swedborg Falls Art League. Although her piece was rejected by the exhibition committee Nordbee signed the work 'A. Nordbee' with a black sharpie and made free margaritas in it outside the local Kiwanis Hall during the opening night of the art league show, drawing quite a crowd. She also handed out over 200 postcards -- purchased earlier in the day at a local Christian bookstore -- each featuring a printed image of Jesus. Nordbee had altered each card by adding a touch of lipstick to Christ's lips with a red pastel and penciling the words 'He's got a hot ass' on the card's lower edge. When a brief story about Nordbee and the altered Jesus cards appeared in the Milwaukee Patch the next day, the blog went viral and comments had to be disabled. The cards became a hot item on eBay, selling for as much as $375.00.

Nordbee soon got a call from Bill Raines, the pastor of a church she had grown up attending:

I stayed calm and told him that I still loved Jesus, but that Duchamp had shown me that you aren't going to get any attention for your work if you don't take a shot at some famous person or symbol or at least sex them up a bit. Besides, I know for a fact that his church was totally packed when he did a sermon about my piece the following Sunday: he actually e-mailed me to say thank you.

As a result of the Patch story, Nordbee also began to hear from a lot of out-of-towners, including a curator from the Milwaukee Art Museum and another from the Dia Art Foundation in New York. "I didn't know what a curator was at first, but I got that sorted out pretty quickly" Nordbee states. "They were very, very interested in me and the curator from the Dia told me that I was as a woman artist re-doing a man's art career I was a really big deal and that I could get grants."

A month later she was in the news again with a large-scale event called 'In Advance of Corporate Downsizing' that took place at an abandoned air conditioner plant. "Duchamp understood that artists and viewers are both participants in whatever the art is," Nordbee comments.

So I knew I had to go all out to show everyone a good time. My sister and I made an installation by hanging all the old broken equipment and tools we could find from the ceiling with wires, and then I signed all the urinals in the men's room. Ed had the genius idea to attach one of them to a beer keg so that if you flushed you could fill up a beer stein: you should have seen the line for that! 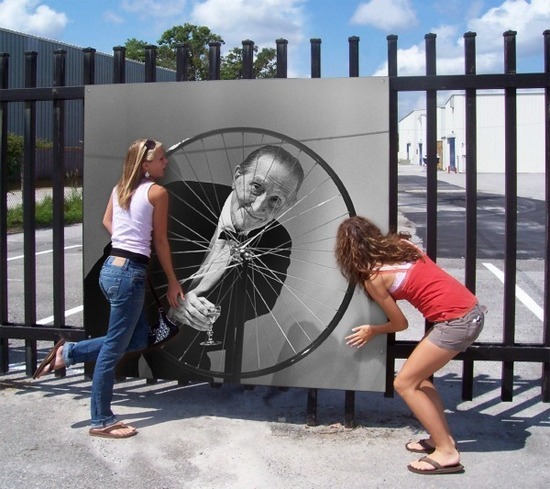 "In Advance" opened at 5AM on November 23, 2012 -- Black Friday -- and was billed as a "performance, concert and alternative to shopping at WalMart." A long queue of visitors, mostly young people and a lot of out-of-towners, snaked past the enlarged photos of Duchamp that had been bolted to the plant's fence, paying ten bucks each to gawk at the hanging tools. As the day wore on there was an ear-splitting concert by a local garage band who had christened themselves "Woman Ray," and a also a growing potluck of casseroles, brownies and tossed salads brought by well-wishers and served on paper plates. April and Ed Nordbee spent most of the day sitting behind a folding table playing chess on the plant's loading dock, selling Duchamp t-shirts, and taking it all in. "People were bringing me their blenders to sign -- I charged them five dollars for that -- and I also signed a few coffee grinders and some Tupperware."

By the New Year Nordbee had received enough attention and national press that her new public image had been secured: April Nordbee is now a brand, and also the subject of at least a dozen PhD theses in progress. "Apparently, I am the first female outsider/conceptualist to come out of this region, " Nordbee states with pride. "My timing was perfect." After her February, 2013 appearance on the Ellen DeGeneres show Nordbee signed a contract with a major gallery: her first show of readymades and signed found objects will open in New York this July. She also has licensing deals with Martha Stewart for a line of signature blenders and stainless steel backyard grills.

Although April Nordbee is now being heralded as a role model and an American success story, not everyone in Swedborg Falls is pleased. Crystal Anne Nordbee, the artist's opinionated 78-year-old paternal grandmother spoke her mind to reporter for USA Today:

April doesn't call me anymore and I don't call her. Ever since she discovered that lazy-ass artist Duchamp April has become very greedy and self-involved. My late husband and I worked hard for everything we had -- we built this house with our own hands -- and I have no interest in so-called art by people who take no pride in what they put their name on. This country doesn't need greedy artists and overpaid CEOs who sell us over-priced worthless crap made by underpaid people in factories overseas. America needs doers and makers right now, not takers.

Author's Note: This piece is fiction intended as a commentary and social satire. April Nordbee, Swedborg Falls and its citizens are not real. Marcel Duchamp, on the other hand, was a very real and tremendously influential cultural figure.