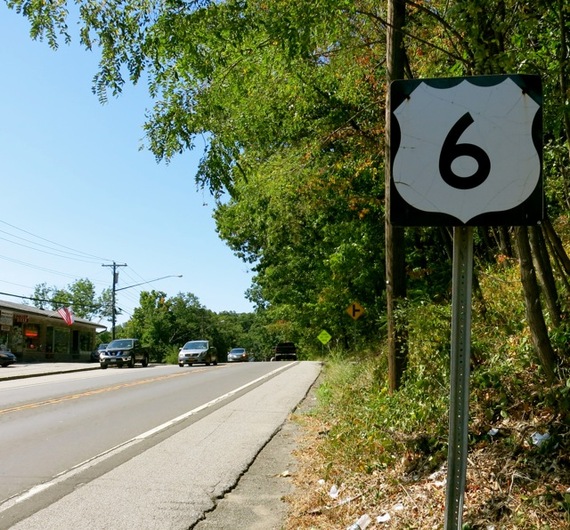 Several years ago, I tackled transcontinental US Route 6, known also as The Grand Army of the Republic Highway. By "tackle" I mean I drove the complete 3,652 miles in the comfort of my own car, purely for the joy and novelty of documenting the country's second longest road for my guidebook, Stay on Route 6. (Though formerly the longest American highway, it was overtaken by US Route 20 in 1964 when California renumbered its routes.)

But endurance runner and musician, Aprylle Gilbert, has been actually tackling Route 6 as earnestly and powerfully as any linebacker goes after his opponents on the football field. She is not doing it for the joy or novelty, either. She's doing it to prove that she can, and "for the kids."

Aprylle and Jose Reyes, Gilbert's friend and Coast to Coast driver, began in Long Beach, CA, the official historic end (or beginning) of US Route 6, and she's been running over a Marathon a day, averaging 30 - 40 miles, day in day out, through deserts (CA, NV, UT), over mountains (CO), through prairies and cornfields (NE, IA, IN, IL), along Great Lakes (OH), and through the northern small towns of PA.

Gilbert is running to raise awareness and money for an At Risk Youth Center close to her heart - the Washington United Youth Center (WUYC) which provides support, mentoring, and special programming for disadvantaged youth in Gilbert's home city of San Jose, CA.

According to Sarah Breemer Pfennigs in an article for GoGrinnel.com,

"Gilbert is used to climbing mountains, both literally and figuratively. A difficult childhood, fraught with numerous moves and schools, found the young girl troubled and unsettled. Eventually, Gilbert ran away from home, never to return. The life that awaited her was full of dark corners and sharp edges, and the company she kept along the way was sometimes dangerous and abusive. Drugs and alcohol became her coping mechanisms.

Years and many, many lessons later, Gilbert found herself a mother of two daughters and looking into the abyss of a crumbling marriage. Although she'd made huge leaps and great strides, Gilbert's self-esteem and emotional equilibrium were still fractured, and her impending divorce sent her reeling. Gilbert desperately needed an outlet.

So she started running. Not away from home this time, but toward serenity and clarity." (read complete article here: http://ourgrinnell.com/shes-come-a-long-way-baby-aprylle-gilbert-runs-coast-to-coast-for-kids/)

Aprylle was about 50 miles north of New York City in Mohegan Lake NY - when I caught up with her. She's tiny, pretty and fit, with few complaints and a firm resolve. She's already run over 3,400 miles, with another 260 to go.

Oh, she's going to do it all right. This I know.

Gilbert hopes to reach Provincetown by mid-September. Over the next week and a half, she'll be running east along Route 6 in Connecticut, Rhode Island and Massachusetts. If you spy her on the road, give her a friendly wave. 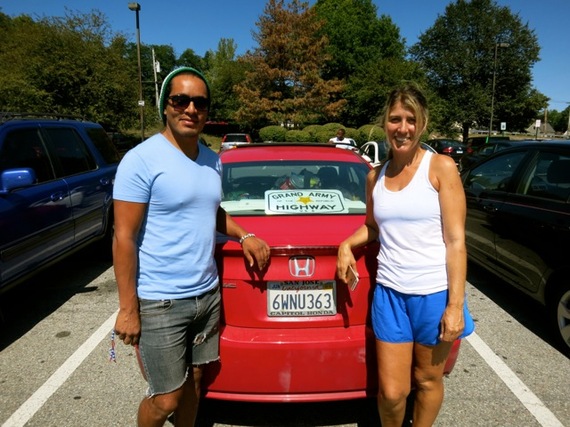 Aprylle has been to the East Coast before, but Jose never has. When they get to the ocean on the other side of the USA, they are in for a treat. The Atlantic Ocean, my starting point, will be the poignant end of Aprylle's Run, but the beginning of a new life: as a role model for troubled and disadvantaged kids. If I can do it, she tells them, so can you.

Aprylle Gilbert, you are an unassuming, modest, but fierce inspiration to many. Long may you run!

Those who care to donate to the Washington United Youth Center in San Jose can do so here.