Your fish tank can now double as a garden. Those little fishies just need to keep doing what they do best -- swim, eat and poop -- and with the proper system you can grow a bounty of produce in your very own home.

The idea is not new: Aquaponics has been around for years. But Jack Ikard, a 21-year-old student and the CEO and founder of AquaSprouts, hatched a sleek design that's user-friendly and will look nifty in your living room. "You don't have to learn a whole new language to use the system," he told HuffPost over the phone. 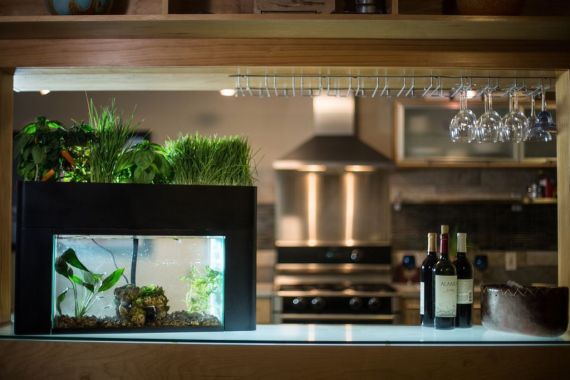 Aquaponics is a form of agriculture that treats fish waste as a fertilizer for plants. Ikard's AquaSprouts Aquaponic Garden uses a pump at the bottom of the tank which, when turned on by a timer, will take the fish waste and convert it into nutrients to feed the plants, while making clean water for the fish. It's an entirely symbiotic ecosystem, Ikard says, where you'll never have to change out a carbon filter -- probably one of the most annoying things about owning a fish tank, eh?

This tank can grow all the ingredients for a perfectly good salad, including tomatoes, lettuce, kale, mint, basil and wheatgrass. The kit can be purchased with seeds, but Ikard says you can easily use your own sprouted starter plants in the system. They'll start to germinate after a day or two. The tank can also raise flowers and indoor plants if the edibles aren't your thing.

And yes, the idea that you'll be eating vegetables grown from your goldfish's poop is a little icky at first. But, as Ikard explains, "That's just the way the world works. If it's not waste from your fish it's some other kind of poop." Plus, you'll be able to control exactly what the fish consume: Ikard recommends buying all-natural fish food and tank products that are non-toxic. You can find these at any old pet store, he says. 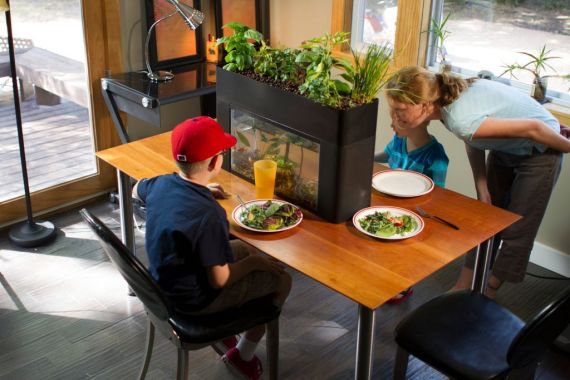 The AquaSprouts Aquarium Aquaponic Garden Kickstarter campaign has reached about half of its $60,000 goal as the publication date of this article. Ikard says he is optimistic the campaign will raise the proper funds to start sales in January of 2015. The AquaSprouts garden kit fits over any standard 10-gallon fish tank, or can be purchased with one included. Check it out here.