In the wake of the Orlando shootings, the AR-15 and weapons like it are in the spotlight because, once again, a semi-automatic rifle was used in the shooting.

This time, it was technically a Sig Sauer MCX, but it's in the same classification of gun. It's a category of weapon called "military" or "assault rifles." And while some people would like to blame that nomenclature on the "ignorance" of liberals, it's how they are actually marketed. 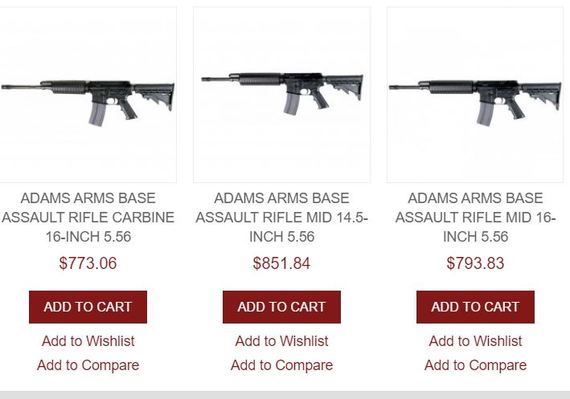 But there is also a technical distinction between an assault weapon and the "semi-automatic rifles" which the gun advocates want you to know about.

I will quote the Blaze here, so as to not be called "gun grabber" or be accused of any bias in my definition:

For the purpose of this article, we'll focus on AR-15s since it is what CBS calls "the most popular rifle in America" and one often designated an "assault" rifle. An AR-15 is the civilian equivalent to the military's M-16. So what's the difference?

Kelly Alwood, a firearms trainer and consultant, told TheBlaze the only difference is that one is fully automatic and the other is semi-automatic. It's a small yet simultaneously big distinction. Firearms for use by the military are able to shoot continuously with one pull of the trigger, machine-gun style. Civilian firearms, on the other hand, only allow one shot per trigger pull.

So one is semi-automatic, and the other is fully automatic. Got it.

See, with a semi-automatic weapon, you have to pull the trigger each time you want to fire a round. You can't just hold the trigger down and have a steady stream of bullets come out like you can with a fully automatic.

This, to the gun-rights advocate, is the quintessential distinction between them. But that's a distinction without a difference.

So what is a bump stock, you ask?

I'll let this guy tell you because he seems like he knows what he's talking about. After all, he's selling them, right?

At about the 20-second mark, what did he say?

"This stock will let you use your semi-automatic rifle to bump-fire--or mimic automatic firing--without breaking any laws."

Those are his words, not mine. And while he goes on to adhere to the semantic distinction, he's doing it emphasizing that in practicality, there is not one.

Alright, so what does that mean.

"Bump firing is the use of a recoil of a semi-automatic firearm to simulate the effect of firing fully auto."

So basically, it lets you do the same thing as a fully automatic weapon; it just lets you do it in a slightly different way. Each time the gun recoils, it bounces back, which causes it to automatically pull the trigger again, which causes another recoil and so on.

With both an automatic weapon and a bump stock, you're holding your finger still while the gun automatically fires, but on a technicality, the trigger is being pulled each time with a semi-automatic.

Using the word "automatic" as an adjective, you can describe a semi-automatic with a bump stock as an automatic weapon, even you can't call it one by its technical definition.

Perhaps a visual will help. Here's a guy bump-firing 100 rounds in a matter of seconds:

Visually, does that seem any different than an automatic gun to you? Would you feel terrified if you were pinned in with a crowd as someone fired into it with a gun like that? Or would you feel safe and secure in knowing that it's not really an assault rifle?

But there's a problem with the guy in the last video. He's using what's called a double drum, and they suck. They tend to jam up, and that's the last thing you want to happen if you're trying to murder 100 people in a matter of minutes. Just ask James Holmes.

So what's a would-be psychopath to do?

It's designed to reload quickly, and it's rated for full auto fire--their words, not mine.

Becuase in case the first 50 rounds that went into the deer didn't do the job, you need to be able to dump another 50 into him fast, or Bambi might get away.

And the killers know it because they're using them to shoot over 100 people in a matter of minutes.

Do you think those victims feel any less "assaulted" because they weren't "technically" shot by an assault weapon?

What they're hoping for is that the rest of us won't know, and we'll just buy into the "one pull per bullet" nonsensical rhetoric and let it go.

I don't think the founders had the Orlando shooting in mind when they wrote the Second Amendment.

But we should in considering our gun legislation and start recognizing the difference between a weapon to defend yourself and your family and one designed for assaulting others.