As the world processes the devastating mass shooting Wednesday in the Paris offices of the satirical paper Charlie Hebdo, cartoonists around the world are making sense of the death of their colleagues in France. The code of the political cartoonist is universally held from Sudan to San Diego: at its core, a commitment to clever, useful, and often unwelcome expression.

Nowhere is this tenet more important and difficult to uphold than in countries where regimes and dictators rely on a fearful media. Below, we've rounded up some of the most powerful pen-wielders of the Arab world, whose comics support the mission of Charlie more than any hashtag can.

Born into a political Sudanese family, Albaih took to cartooning early: his first creation as a child was Supernamusa, a superhero mosquito set on eradicating malaria. During the Arab Spring, his more mature drawings -- spread on the internet via Facebook (and now Instagram) -- became icons of the revolutionary movement, pasted on walls from Egypt to Lebanon. Albaih's diverse concerns are still tightly wound around the concept of revolution; among his most popular works is a silhouette of Hosni Mubarak captioned with a double entendre about the longtime Egyptian leader's intractability, and an homage to the Tunisian worker whose suicide set off a wave of uprisings in 2011. In the first comic below, he unravels the statistic linking former torture victims with terrorism. 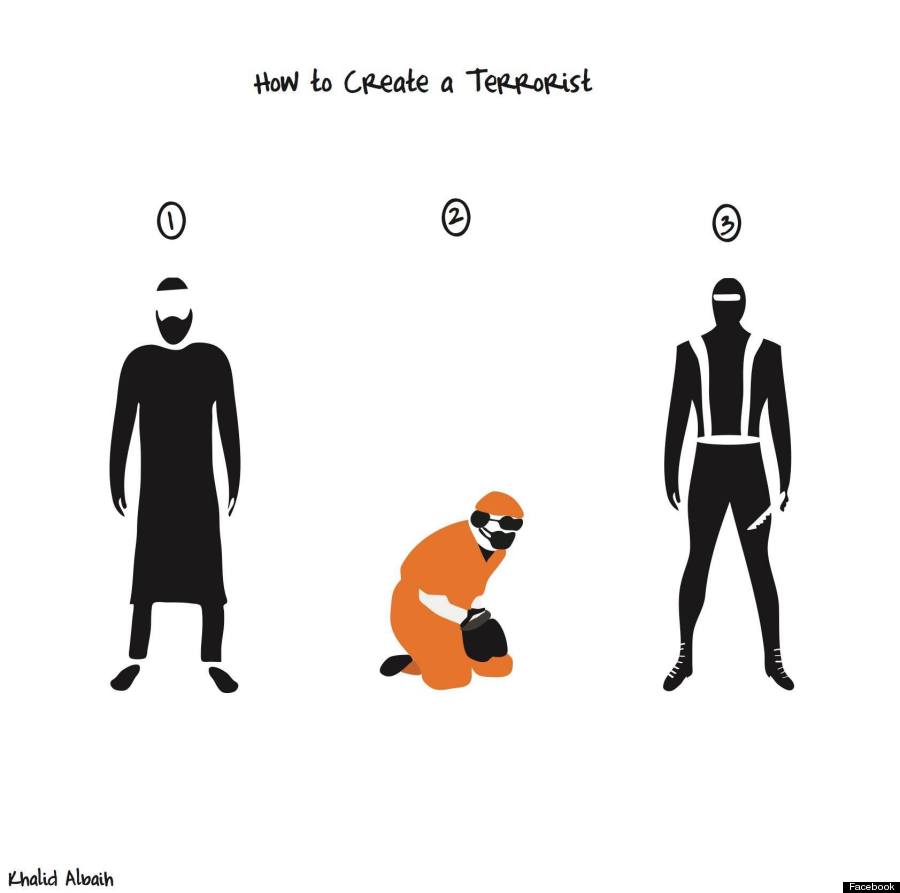 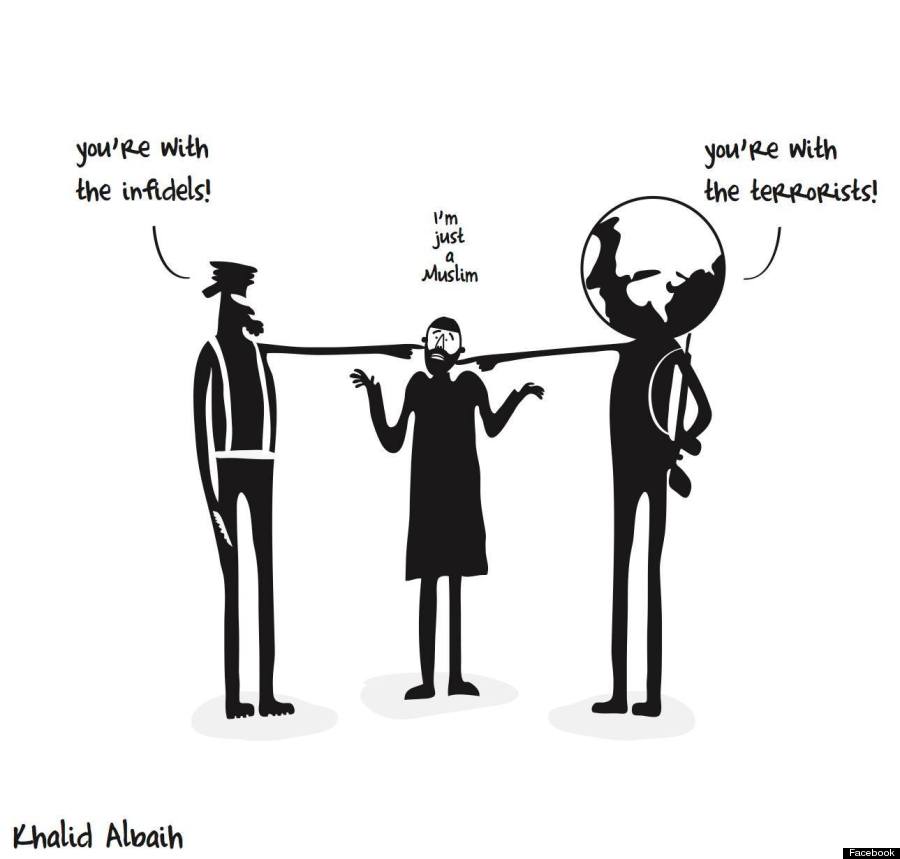 Known popularly by his first name, the veteran Lebanese artist Stavro Jabra calls himself a "super revolutionary." His inspiration comes from the news, and revolves primarily around the shifts in his beloved home country. For years, he has published regularly in the Lebanese papers and on the evening television news -- in Arabic, English and French. When news of the massacre in the Charlie Hebdo offices broke this week, he was quick to air his respect for his slain colleagues, with an image of a shot pencil stamped with the French phrase for "freedom of the press." 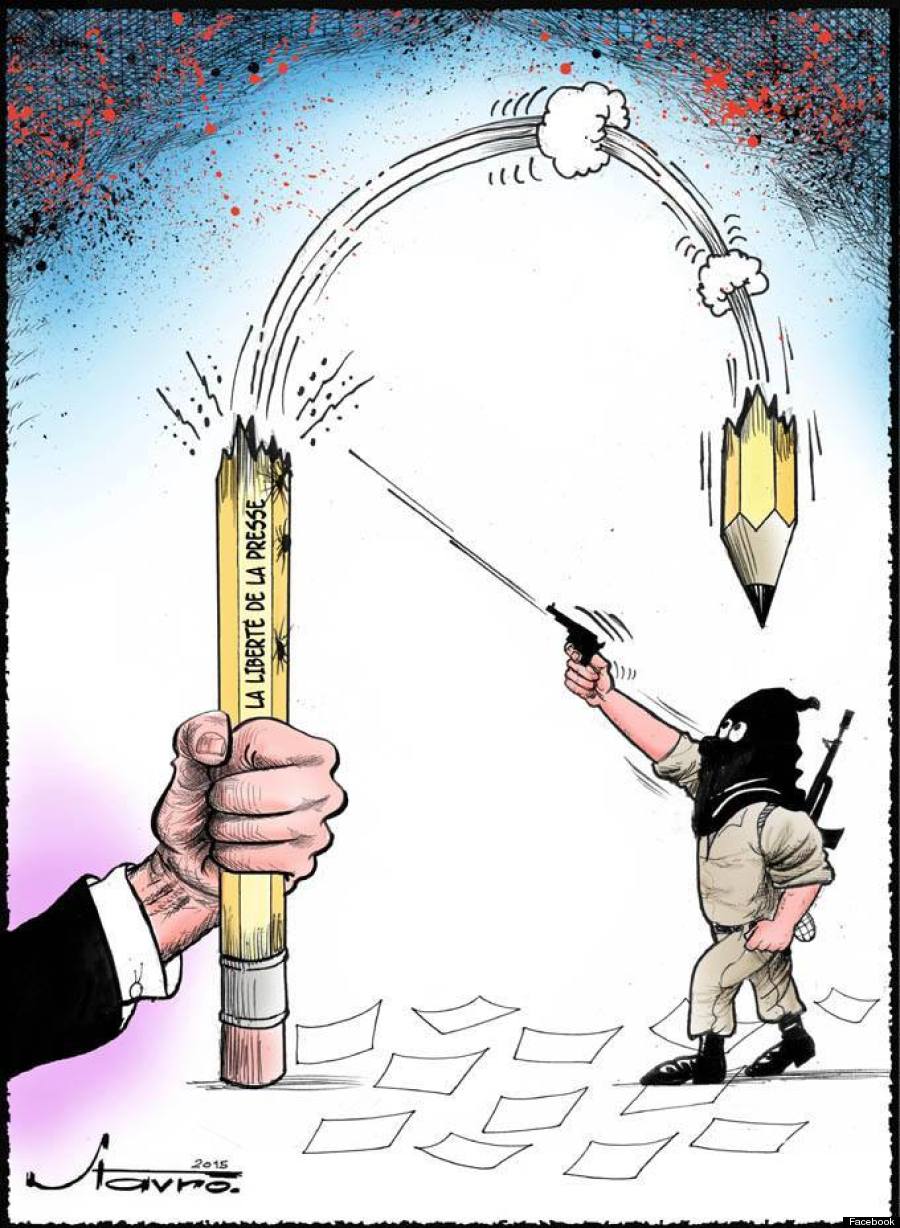 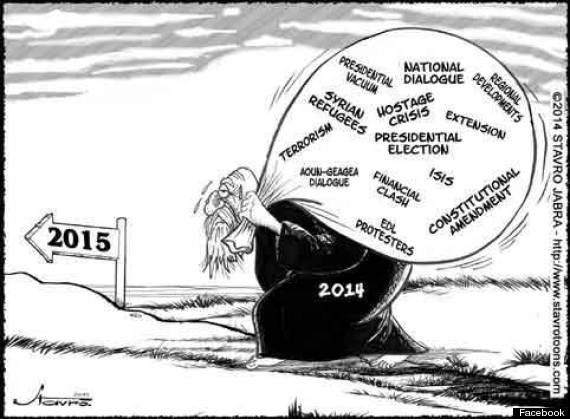 If there is a rock star cartoonist of the Arab world, it's Mohamed Qandeel. The 27-year-old Egyptian polymath better known as Andeel has already built a career impressive for someone twice his age. At various points, he's been a stand-up comedian, a cartoonist at the progressive weekly, the Egypt Independent, a writer of sitcoms, and a podcaster. His target is always "the strongest man in the country," as he told Guernica in a recent profile, a focus his employers at Egypt Independent didn't always support. He eventually left the paper so as to make work without restrictions, using his Facebook page as a platform. 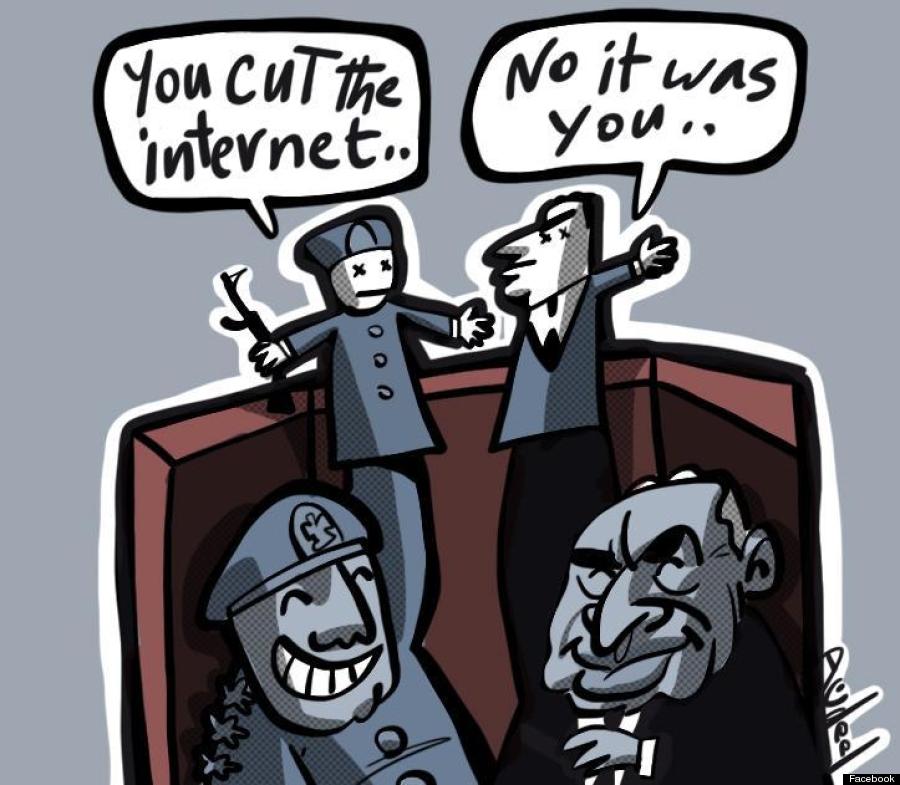 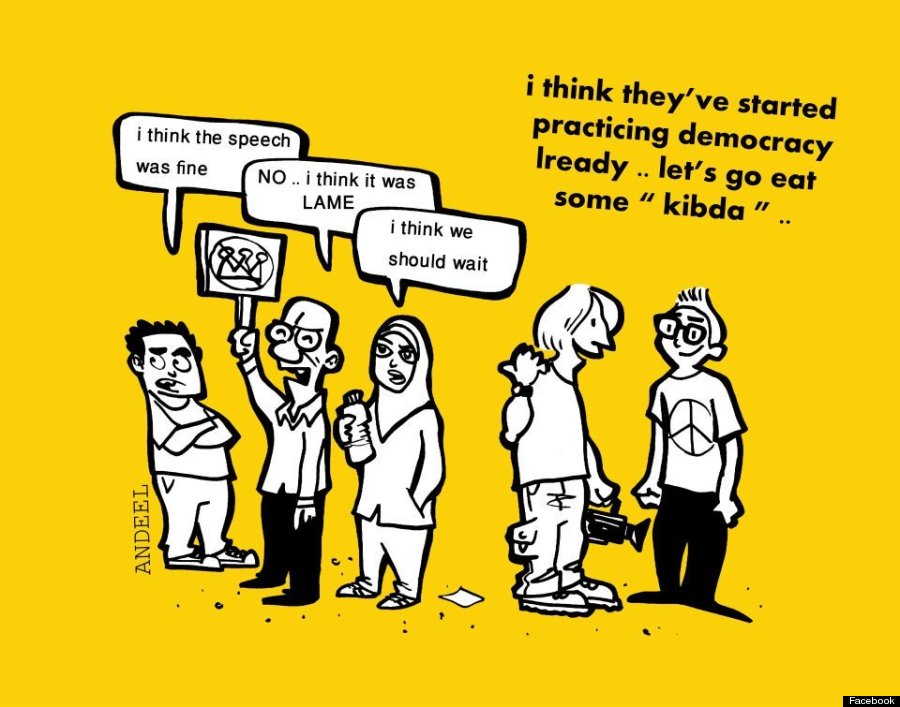 With the development of his Jordanian everyman character -- the mustachioed, witty, Abu Mahjoob -- Hajjaj established himself as a leading voice in his country. His classically drawn comics tackle small and large concerns. In the latter camp, he famously tempered the celebratory mood during the 1999 Pan Arab games in Amman with a comic questioning the pride of a nation in which honor killings still take place. 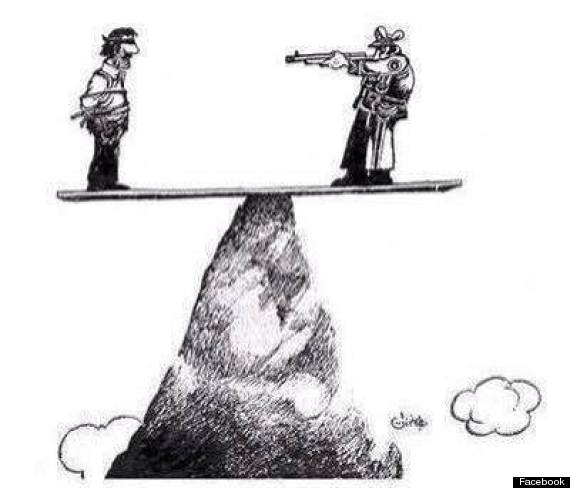 The well known Egyptian cartoonist and writer has been published worldwide, picked up and commissioned by publications such as the Associated Press, the BBC, The Economist and the Washington Post. But his concerns are local: a beetle-browed caricature of Hosni Mubarak figures heavily in much of Okasha's work. In the 2011 cartoon below, he illustrates a popular analogy comparing the recently toppled Mubarak regime to a deeply rooted tree system that remains even after the trunk has been dismantled.

#cartoon @amrokasha The #Jan25 #Revolution toppled #Mubarak but the roots of #MubarakRegime is still exist! http://t.co/Lny7Pzk

The Saudi-based anonymous cartoonist made international news at the height of violent tension in Gaza this summer. His cartoon, "rescuing Gaza," commented on the gap between action and hollow sympathy, with its depiction of a teen gazing tearfully at the thousands of "Likes" anointing a pro-Gaza Facebook page, as he devours fries and sodas. There's a jarring, Dilbert-esque quality to the Aimantoon ouevre, which pairs bright, often mundane vignettes with difficult existential truths.

Boukhari, a Palestinian cartoonist, knows firsthand the dangers of his craft. In 2008, authorities in Gaza suspended publication of the popular newspaper Al Ayaam, where he was an employee, claiming that a comic he drew insulted Hamas. Boukhari and two senior employes faced a prison sentence until a series of demonstrations in Ramallah led to the dissolution of the charges. 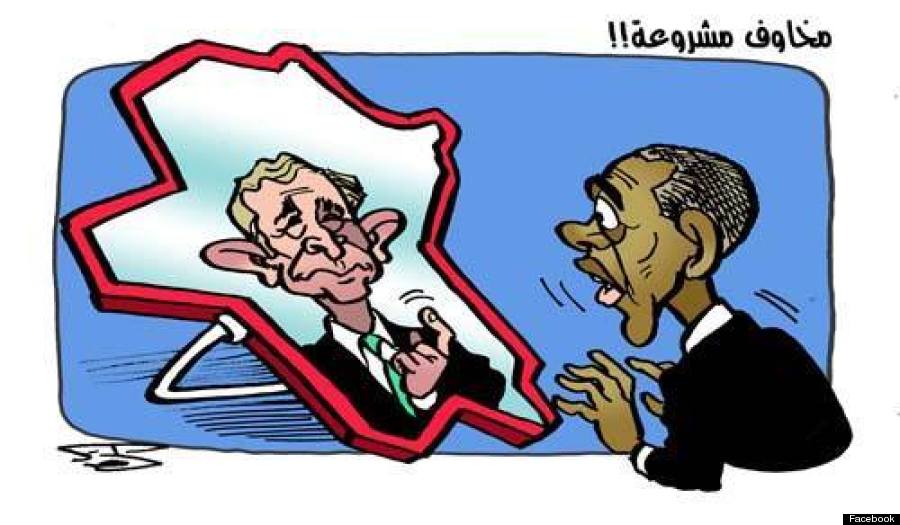 Another crusader for freedom of the press, the Moroccan cartoonist Khalid Gueddar was dealt a three-year suspended prison sentence in 2010 for portraying a member of the Moroccan royal family. He was fired from posts at two national dailies, only to see his reputation expand. He now publishes his single panel cartoons in a handful of journals and papers around the world. 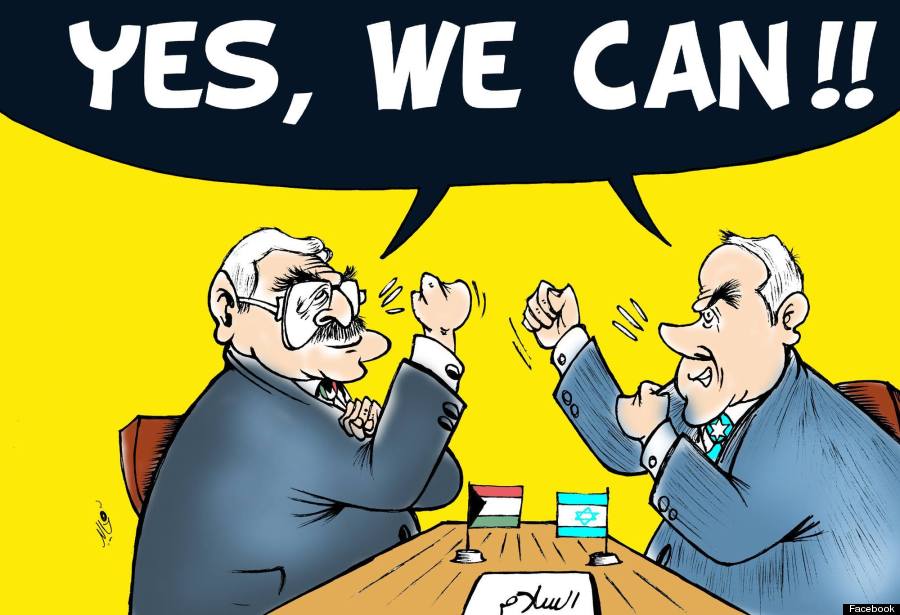 CORRECTION: A previous version of this story misattributed a cartoon to the Jordanian artist Emad Hajjaj. The error has been corrected.