Nine months have now passed since the tumultuous beginnings of the Arab Spring burst forth in the streets of Tunisia. A rising spirit of protest has since spread like wildfire across the Middle East, communicated primarily through the channels of social media.

For the legions of critics who had previously dismissed platforms like Facebook and Twitter as vapid troughs of celebrity gossip and self-aggrandizement, the toppling of regimes in Tunisia and Egypt suggested that these tools were as effective for organizing protests and revolutions as they were for organizing keg parties. The movements throughout the Arab world appeared to have imbued social media with an irrevocable sense of legitimacy as a tool for fomenting change.

As the ongoing tumult throughout the Middle East enters a sort of adolescence, however, the true role of social media in the revolutions is undergoing a necessary closer inspection.

On Friday, a bevy of innovators, policymakers and evangelists of social media gathered at the magnificent new home of the U.S. Institute of Peace to discuss the ever-evolving role of social media as a tool during times of conflict. 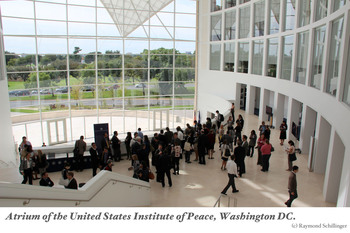 In the spirit of social media, I'll share a smörgåsbord of snippets culled from Friday's summit that reflect the breadth of topics addressed by the panelists:

Long story, short: no one knows where this is all headed just yet. That didn't stop some of the top minds in the room from speculating, however.

Andy Carvin, NPR's social media maven who through a single Twitter account -- his own -- managed to produce superior coverage of the Arab revolutions than any of the mainstream media outlets, aptly noted that social media is more about narratives than isolated content. Furthermore, Carvin recognized that true credibility in the online arena is earned over time, and the indispensible art of fact-checking is now a crowd-sourced activity. 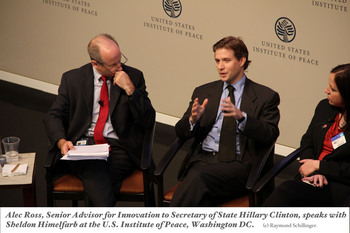 Also present was Alec Ross, the tech paragon of the State Department, who has spent the past few years merging cutting edge technology with the mission of diplomacy. Once considered one of the more lethargic government agencies, the State Department has recently invested significant resources in "e-diplomacy," leveraging Twitter feeds, Facebook pages, and Youtube accounts to interact with, rather than preach to, audiences in other nations. Ross equated the rise of social media to a democratization of world politics, shifting the balance of power from nation-states to individuals and smaller institutions. The downside to that shift, Ross admitted, is the exacerbation of fragmentation by way of the social media megaphone.

The challenges posed by the new media landscape -- security, veracity, and accessibility -- will likely take years to fully comprehend. But as the contours of the role of social media in the Arab Spring and elsewhere begin to take shape in the academic and policy-making arenas, everyone seems to agree on one point:

The revolution is far from over.