Bernie Dennis Sr. always wanted a grandson. While he dearly loved his three granddaughters, there was just something about the idea of a little boy sharing his passion for tinkering around -- fixing everything and anything that broke, building models and tossing a ball around in the back yard.

His one and only grandson finally arrived in June 1977. He was named Patrick, Bernie Sr.'s middle name.

Bernie, however, never met him. A heart attack had taken the patriarch's life that February; he was only 62.

Fast forward to April 1995. Patrick is weeks from graduating high school, so he and his mom go off to visit a college. His dad, Bernie Dennis Jr., didn't join them because he wasn't feeling well. As it turned out, he was having a heart attack.

Bernie Jr. wound up in the same emergency room of the same hospital that treated his dad. Horror-stricken by the memory of his father's final days, he'd soon learn what a difference 18 years had made in the fight against heart disease.

Bernie Jr. received great emergency care in the Coronary Intensive Care Unit during his month in the hospital where his life was saved as a result of several innovations supported by the American Heart Association.

Jr. received tPA, a clot-busting medicine that became standard about a decade after Sr. died.

Eventually, Jr. was administered an angioplasty, a procedure that was new and considered highly risky in Sr.'s day.

Despite those treatments, trouble persisted, so Jr. underwent a quadruple bypass, a procedure that also had become far more common and reliable. This did the trick, giving Jr. the second chance at life his father never got. 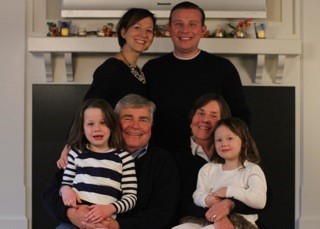 Bernie saw Patrick graduate high school, then college. He was there for his son's wedding to Victoria. Around Christmas in 2007, Anya arrived, making Patrick a father and turning Bernie into "Poppy." Another granddaughter, Elyse, arrived in 2010. Bernie and his wife, Joyce, meanwhile, are steaming toward their 43rd wedding anniversary in April.

Four-generation stories like this show the arc of progress in the fight against heart disease. In only a few years, the impossible has become routine. This is further illustrated by the following graphic, which shows the rate of deaths from heart disease plummeting from the 1970s to 2012, the most recent year for which statistics are available. 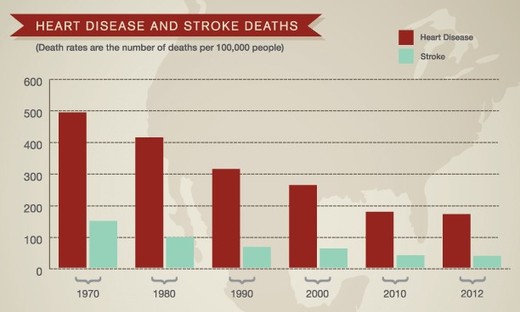 Of course, these aren't just numbers. Each digit represents a person -- family and friends, neighbors and colleagues, grandparents and grandchildren.

Bernie Dennis Jr. was so awed by the quantum leap in care from his father's heart attack to his own that he became an active volunteer for the American Heart Association, the nation's oldest and largest voluntary organization devoted to fighting cardiovascular diseases and stroke. He is now in the second year of a two-year term as national board chairman, and it's my pleasure to turn this space over to him to continue this conversation. 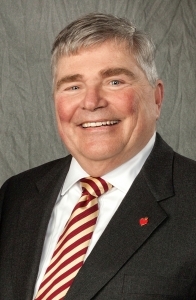 I'm a collector. Everywhere I go, I collect stories of heart disease survival.

AHA volunteers love sharing their personal stories with me, and I love hearing them. I now say that the story of the American Heart Association is the story of many stories. No one story is better than another, all are delivered with passion and each embraces our mission.

This brings me back to that graphic.

The death rate dropping means that survival is up -- way up. Let's crunch those numbers in another way:

When you factor in a huge spike in our population over those years -- from 203.4 million in 1970 to 312.8 million in 2012 -- the number of survivors becomes even more staggering. I'm constantly in awe of how fortunate I am to be among them.

I can't help but wonder whether the tools that saved my life might have saved my father's. I try not to linger on that, though, instead focusing on how much better the odds are for my son and my granddaughters. That's comforting.

(A quick aside: I work closely aside the president of the American Heart Association, Dr. Elliott Antman, and I've learned that he was among the researchers who helped discovered the benefits of tPA in heart care. The same drug that helped me survive while in the hospital, Wow.)

There's no telling what the future holds, but I know it's exciting stuff. That downward trend for the death rate will continue as we refine and discover new ways to not only treat heart disease, but also to prevent it.

As my offspring age, I hope the care for them and their generation is less invasive. I hope medicines can be administered long before problems manifest. Because we know that so many causes of heart disease are preventable, I dream of a day where the only risk factor is family history. Wouldn't that be wonderful?

I'd like to close with one last story that underscores why beating heart disease is so personal to me.

When my granddaughter Anya was about 4, her imagination overwhelmed reality. She loved coming over to our house and play-acting different characters. For about six months, she was always Tinker Bell, my wife was Peter Pan Mimi and I was Captain Hook Poppy.

Last year, I heard that Cathy Rigby was coming to Boston to do a final show of Peter Pan, and I got orchestra seats so Anya, Joyce and I could be right up close. We happened to arrive at the last possible moment, then were ushered right up to the stage; we felt like royalty being escorted to the front.

Just as we sat down, the show began. Cathy Rigby immediately comes flying by, dropping pixie dust on us.

Anya stood in her chair, grabbed me by the neck and said, "You're the best Poppy ever!"