These days, more people are probably pondering the eruption of Mount Vesuvius and the resulting devastation of ancient Pompeii than when it actually happened, in 79 A.D. The eponymous movie (Pompeii) is fun, and I like this stuff, thus I figured I'd go the extra mile and speak with a real-life archaeologist -- the intrepid kind! -- in the form of Professor Sarah Yeomans, a faculty member at West Virginia University. Yeomans wears several different academic hats -- she also works at the Biblical Archaeology Society and is pursuing her doctoral studies at the University of Southern California. 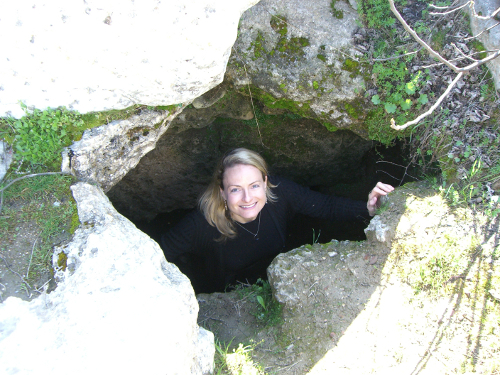 Sarah Yeomans emerging from an aqueduct in Laodicea, Turkey

It seems a bit forward to launch by asking if she owns a fedora and a bullwhip, so first I ask what led her to a career in archaeology (including fieldwork in Pompeii) -- as opposed to the generally more lucrative land-appraisals of, say, real estate.

Professor Yeomans laughs cheerfully. "Well, I admit I did cause my parents some consternation; I think they were hoping I'd get a nice solid, useful business degree. My father is an astronomer at NASA, so I think growing up in that household, I really saw what it was to love what you do -- and how much satisfaction there is in being engaged in a career in which there's always a process of discovery. There's always something new to learn, there's always something exciting to investigate.

"When I was a junior in college, I studied abroad in the south of France, and that's an area of Europe where there are a lot of Roman ruins -- beautiful architectural monuments, bridges and arenas. I was enchanted at the idea that people just like us had achieved all of these things, 2,000 years ago. So when I came back from France, I changed my major, and went to graduate school, and haven't looked back." 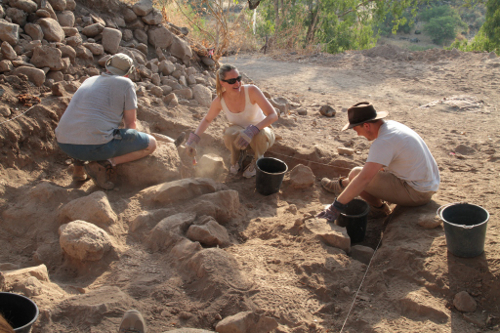 Matriculating at the University of Sheffield -- where the British system holds Archaeology as a pursuit unto itself, rather than a component of Classics or History or Anthropology (as is more common in the U.S.) -- Ms. Yeomans followed her bliss into the past, and the present. I ask her about the contemporary applicability of ancient studies.

"Obviously our societies in this time are different than they were in antiquity, particularly in terms of our technology -- but human beings, and the motivations of human beings, and the relationships between human beings, these don't change. You can learn from the past. For example, I see in the media all the time comparisons to "the fall of Empire" -- ancient Rome, ancient Egypt -- and sharp people are drawing parallels with our modern society. If we can learn from the past, we have a good chance of positively affecting our future." 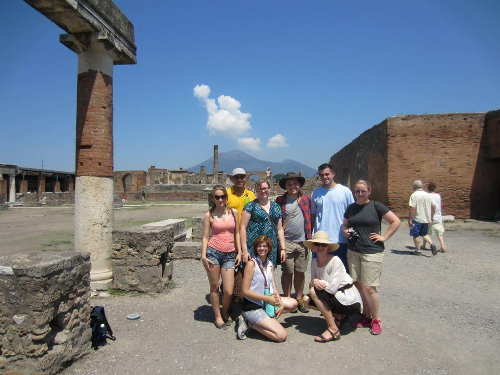 Director Paul W.S. Anderson's film, Pompeii, is pure spectacle: dewy, doomed, caste-challenged lovers struggling amidst much sword-and-sandaling -- narratively it's Gladi-tanic (or Titan-ator), add plentiful lava projectiles. Anderson delivers the epic with stunning devotion to period detail, and he somehow sidesteps the haughtiness of James Cameron or Ridley Scott. I don't know much about his mutant-zombie franchise, but Alien vs. Predator was terrific, and the director brings that energy to Pompeii. I ask Professor Yeomans how closely the director's vision cleaves to historical research, and she assures me that it's true the Romans didn't get the memo on bullying (herein they beat up on the Celts), and not so true that Pompeii was "the Las Vegas of the Roman Empire," but rather a port city, with its attendant vices.

"One of the things that Anderson -- or any moviemaker who is dabbling with history -- has to do is condense an expanded timeline into about two hours. So the sequence of events is very accelerated," she states. 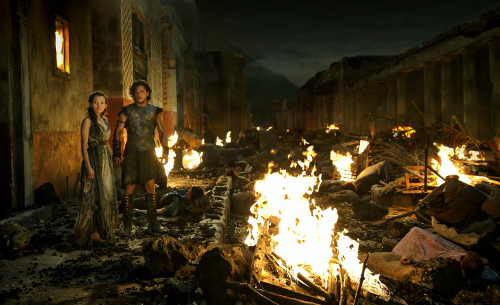 "What we have is something deadly, called pyroclastic flow -- which is essentially superheated mud and rock that slides down the slope of the mountain at 50-80 miles per hour, and there's no way you can escape from that; if you're in the way, it's pretty much all over. That was the most dangerous phase of the eruption, and we believe that was what killed the majority of the people of Pompeii: the heat shock from the pyroclastic flow."

Pompeii is a visual marvel. I ask what the filmmakers really got right.

"I like the way that Anderson zeroed in on the details, in recreating the city in CGI," reflects Professor Yeomans, citing the accuracy of the paving stones in the streets, and the graffiti on the walls. "We have a lot of that in Pompeii -- people would scrawl graffiti on the fronts of buildings and houses in the way they do today. Much of it was political in nature, campaign slogans, and this sort of thing. There are scenes where you can see that, in the background."

Yeomans further praises Anderson & Co.: "One of the main drives of the storyline is the tension between the people of Pompeii and the imperial government of Rome. This is accurate. We have this idea that Pompeii was a Roman city, and it was Roman, in the sense that it was part of the Roman Empire. But culturally speaking, Pompeii was a Greek colony that was also populated by an Italic people called the Oscans, before it was ever part of Rome. Pompeii was involuntarily annexed to Rome in the early first century B.C." (In the movie, this is brought to bear as Roman baddie Kiefer Sutherland malevolently twirls his metaphorical moustache at proto-New-Ager Pompeians Carrie-Anne Moss and Jared Harris.) "You see that tension in the movie," concurs the archaeologist, "between the citizens of Pompeii, and the imperial government." 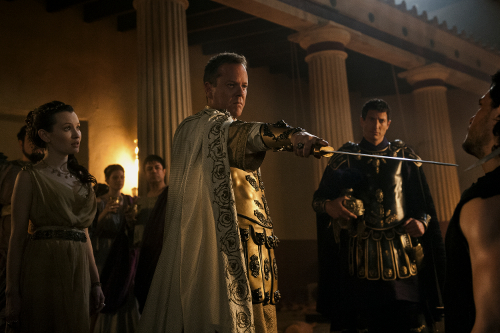 What would Kiefer do?
Photo courtesy of Sony Pictures

As I am in the presence of one who knows of what she speaks, I wonder aloud about Vesuvius: In 79 A.D., was its eruption the stuff of religion or superstition -- or were there (as I ballpark it in) "ancient seismographers"?

Sarah pauses to reflect, then elucidates: "Unfortunately, the only sources that we have from that period are from the upper strata of Roman society -- because those were the educated elite who were writing the texts that have come down to us. We're not totally sure what the uneducated lower classes thought of this, and how they perceived it. But in the literature that we do have, there's no real evidence that the educated elite of Roman society actually believed their mythology at this time. In the early Republican period, they were probably much more immersed in mythology as their religion -- but by this time, we see that, at least among the educated classes, events like these were perceived more or less as natural phenomena; they just didn't understand the mechanics of it.

"Pompeii is a seismically active area," she continues, "but there's no evidence to suggest that they connected the earthquakes with the volcanic eruption. And up until this point, we don't have any evidence that Vesuvius had erupted in living memory of the Romans. The last time it erupted was approximately 17- or 18-hundred years before, in the Bronze Age. And so there's no evidence that suggests that they even knew that this was an active volcano. They were familiar with earthquakes, that was sort of part of their normal lives -- there had been a major earthquake in 62 (A.D.), just 17 years before. But no evidence suggests that they understood these to be linked with a volcanic eruption." 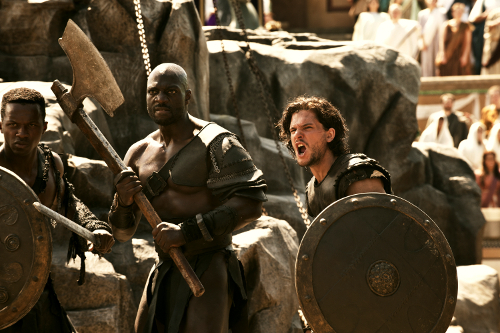 "We came here to endure Vesuvius and chew bubblegum -- and we're all out of bubblegum!"
Photo courtesy of Sony Pictures

And what of the melodrama? Are the characters and conflicts in the film suitably archaic, or is there a modern overlay?

"The director has to deal with the modern sensibilities of a modern audience," reasons Professor Yeomans. "For example, the role of women in Roman society was rather different than how it is portrayed in the movie. Roman women, generally speaking -- of course there were exceptions -- were not in the public eye, and they were not engaged in politics, or commerce. Most upper-class Roman women, if they went out at all, would have been very modestly dressed -- you would not have the plunging necklines, and the slit up the dress to the hip." She laughs. "I can't see how it could be any different, because half your audience is female, and you'd lose half your audience, it wouldn't be as engaging." (Sounds like what Peter Jackson & Co. keep doing with Tolkien's 1950s-boys-club Middle Earth.)

"I think Anderson did a good job of balancing historical accuracy with the sensibilities and expectations of a modern audience," Professor Yeomans concludes. "It's a movie and not a documentary, so we can cut him some slack." 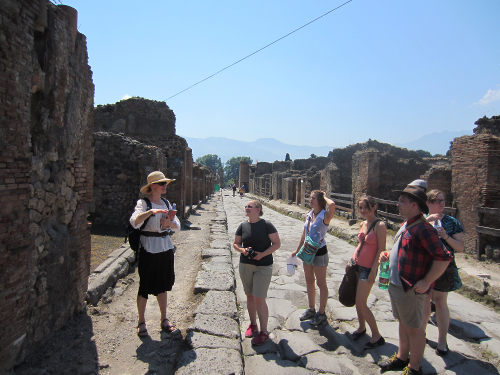 I thank the good professor for articulating this history and culture so elegantly.

"If we're doing our jobs well, that's what we're supposed to do: make our work make sense." Professor Yeomans, who may waft away dust but is anything but dusty, celebrates bringing science to entertainment, and vice-versa. "The National Academy (of Sciences) has a whole division dedicated to just that, and it seems like there's more and more conversations taking place between the two fields, which is great. I think a lot of academics get their backs up when fictionalized movies are made about actual historical events -- and I don't take that stance at all, in fact, quite the opposite: anything that gets people interested in history, in my book, is a plus." 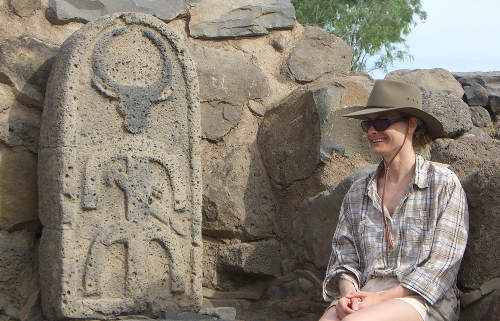 Sarah Yeomans in the field at the archaeological site of Bethsaida, Israel
Photo by Aaron Gale

And dig this, aspiring archaeological adventurers: It turns out that Professor Yeomans does indeed wear a fedora for fieldwork! Oh, and she really does own a bullwhip (it was a gift).

Pompeii the movie is now playing. Pompeii the ancient site has been open to tourists for about a quarter-millennium.