Writer-creator Adam Reed is a busy guy with a hit animated series (Archer) and another one on the way (Cassius & Clay) -- plus he's flying up to Canada this week for the Banff World Media Festival -- so we jump right into it. 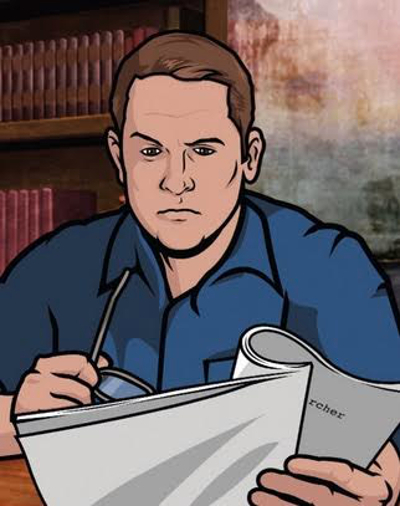 I see that you'll be hosting a master class at Banff -- what can you tease about that, without being too spoiler-y?

Okay, well at least everyone will know what sort of tenor the meeting will have.

Great! Everyone'll know what to expect.

Yeah, but they're probably mostly Canadians, so they're going to be really polite about it.

Yeah, they'll kind of look the other way. Obviously you're going to be talking about the development of Archer, to some extent -- probably to a great extent.

I would think so. 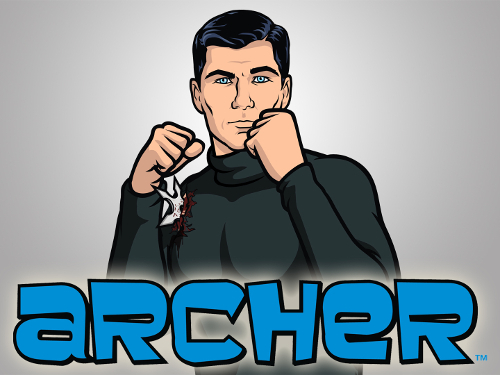 Can we go back to the beginning of that? Because I'm not totally sure what the genesis was, where you said, 'Okay, I want to do this kind of crazy spy-adventure thing, with this sort of anachronistic time line, and all the rest.' What germinated to make that happen?

My partner Matt Thompson and I had a cartoon on Adult Swim called Frisky Dingo, and it had been sort of 'canceled by mutual agreement,' I guess. Although I say it was 'mutual,' they might've just said that to make us feel better. But after that show was canceled, I took a year off and traveled: I walked across Spain, and I was in North Africa -- and I was sort of bedraggled-looking most of the time. But I was sitting in really nice cafés in Europe, and just filling up notebooks with show ideas. I kept coming back to thinking about James Bond, and all the cool places in Europe he went, and all the fancy parties that he went to -- that I wouldn't be invited to, because I had a backpack and a scraggly beard. So I just started thinking more and more about James Bond.

Years ago, somebody gave me a set of all the James Bond paperbacks, like, from the '50s. And I read a couple of them, and in the books James Bond is really quite a bastard. And also a rapist. So I was trying to think how to make a secret agent as big a bastard as possible, that you would still like and root for. And obviously not have him be a rapist like James Bond. From that sprang Archer. 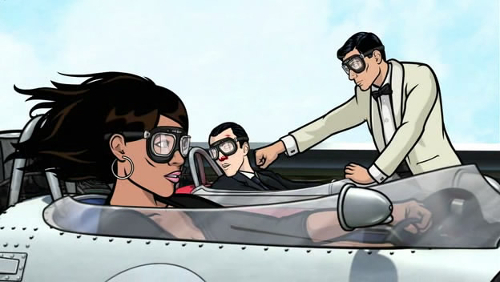 James Bond lost the funny -- so Archer picked it up!

Okay. Well, continuing that tangent just briefly, do you have a favorite Ian Fleming book, or a favorite James Bond in the movies?

In the movies, I'm a Connery man, although I really like the Daniel Craig reboot. I'm less of a fan of the sort of tongue-in-cheek Roger Moore era -- although I think the new ones could stand to have just a slightly lighter tone sometimes. They can be pretty grim, recently. But I think Craig's a fantastic Bond.

Yeah, like when the train goes kerblooey, and Bond readjusts his cuff-links, I was like, 'Okay, now you're back on the right track.'

Do you consciously bring any of that -- or James Coburn's 'Flint' movies -- or that era into your discussions, when you're creating the episodes?

Not so much anymore, but certainly early on. Flint was a big influence, as was Matt Helm, and OSS 117 -- everything, basically. We put it all in a pot, and stole all of our favorite things from a lot of different sources.

Do you ever have to modify stuff, so it's more comprehensible in the modern day? Or do you just go with it being amusingly anachronistic?

It's sort of whatever serves us best, and we're -- I think -- unfair, and break several rules about it. But when it serves the comedy to have it be more '60s- or '70s-based technology, or whatever, we use that. But when it serves us to have the Internet or cell phones, we use that. Cell phones make it much easier than having people have to go to a phone booth. Text messaging is a really economical way to forward the story, and not wait for the mail to get delivered. 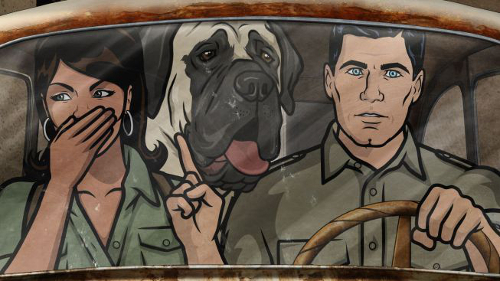 Even in animation, they remove the rear-view mirror.

Right. Well, going back to the origins of your animation work, apparently you and your partner were doing 'odd jobs.' Like, what kind of 'odd jobs' do you do, when you're getting ready to create series?

Oh, at Cartoon Network! We were in charge of the tape library, and then we started doing interstitial programming for little kids, like ages two to five -- that were little hand puppets with googly eyes. We did that for a couple of years. We did a live-action morning show with Carrot Top for a year. It was a real mixed bag.

Are there certain protocols for working with Carrot Top?

There -- uh -- yeah -- although I don't know if 'protocols' is the right word. It was (Adam gives this considerable thought) an interesting experience -- I'll put it that way. He's an extremely nice guy, but the production was a bit of a mess.

I see you've got Cassius & Clay in development, and that's a brand new headline. What can you say about it?

It's sort of a Butch and Sundance meets Mad Max meets Thelma ane Louise meets Lucy and Ethel [laughs]. It's set in the post-apocalyptic mountains of North Carolina, where cannibals are roaming the countryside in souped-up diesel vehicles -- and the non-cannibal people --

(We call ourselves 'vegetarians,' I want to interject. But I don't.)

-- have retreated to the walled cities of former NASCAR racetracks, and these two women -- Cassius and Clay -- make their living as scavengers slash bandits slash gamblers slash screw-ups. We're working on the pilot right now, we have an amazing cast, and we're very excited about it. Megan Ganz [Community, Modern Family] -- an extremely talented writer -- wrote the pilot with me. We're seeing good things.

Cool. Does it present challenges that you haven't met before? Or are there some things that you've learned along the way that are going to make this production easier?

Hopefully we will learn from our -- [laughs] -- our catalogue of mistakes, and learning bumps along the way. There are always ways to improve the production, but that's on the technical side -- and I don't understand how our animators do what they do -- I just know they make it look beautiful. And on the writing side, that end of things, basically we write as funny a script as we can, and use that as -- I think Harold Ramis said the script is always the worst case scenario. And then turn it over to our wonderful voice cast [which includes Kaitlin Olson, Susan Sarandon, and J.B. Smoove], and let them make it much better. 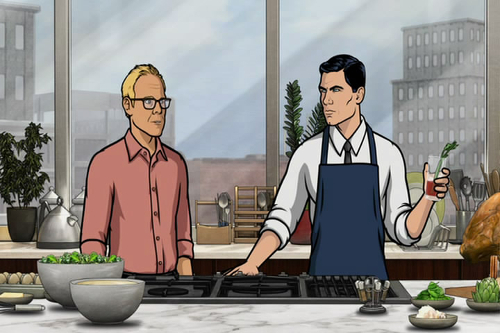 Okay, this master class thing, I'm a little stuck on this. What if you get the question: 'Where do you get your ideas from?' (I'm not sure whether or not Adam infers that I left that preposition dangling ironically -- but hey, young journalists: Take risks!)

Sometimes it's the news, sometimes it's old movies, sometimes it's an episode of The Six Million Dollar Man. Sometimes they just come while you're tinkering on a motorcycle, or falling asleep -- they actually come quite often, falling asleep. And I keep meaning to have a note pad on the bedside table, but I always forget. So there could be some real gems that I've just forgotten to write down.

(I praise the current state of recording gadgetry -- come on, man! you make a spy show! -- and Adam concurs.)

Adam will be there to answer your questions!

Okay, and the other question that always gets asked at panels: 'What advice do you have for young creative people who are just starting out?'

You know, I would say: Make whatever your idea is. Go ahead and do it as cheaply as possible. And put it on YouTube -- it has really changed the game. They used to say you have to move to Los Angeles, and get a Los Angeles phone number and an agent, and blah-blah-blah. But I really think those days are behind us, and now there are people at networks whose whole job is just to scour YouTube for up and coming talent. And we've had animators leave us to go on to bigger and better things because they did a short animated piece, and put it on YouTube, and ended up with millions of hits -- and then the next thing you know, the agents are beating down their door. It's amazing: more people than those watching Archer will watch, whatever, a cat falling down the stairs.

(I cite our society's collapse into the intellectual cold war of LOLCats. Then I am strangely inspired to ask Mr. Reed his feelings on the contrast between YouTube and Vimeo -- which not unreasonably inspires a puzzled chuckle, so we wrap up.)

Since you know so much about feature films, do you want to expand into that area at some point?

I would love to! The trick is to get somebody to let me do that. Or to trick some studio into paying me to write a movie for them.