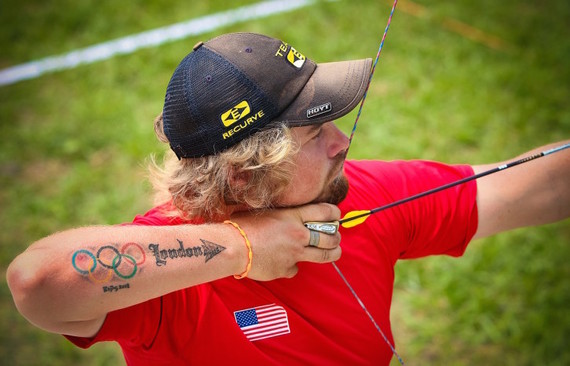 Many archers have tattoos of bows and arrows, and these beautiful works of art do more than decorate skin. For many, tattoos mark milestones and achievements, or serve as reminders to keep working toward goals and dreams. For others, tattoos capture the archery spirit that inspires so many of us. 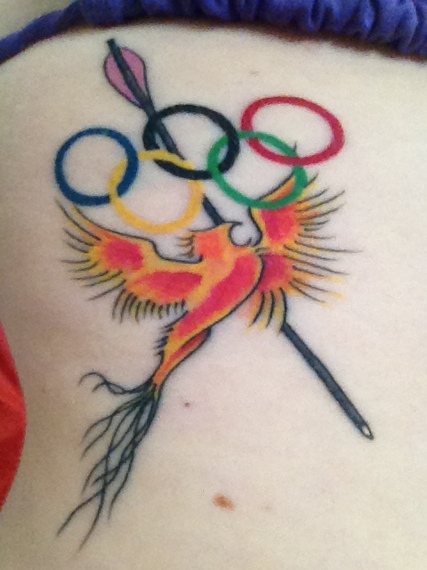 Few people know about Miranda Leek's tattoo, which she had inked a few months after the London 2012 Olympics. She wanted "something that would be unique to me and my history in the sport; basically, unique to my life."

The rings represent the Olympics. The black arrow with pink fletching is a nod to Leek's start in archery through her father, who fletched 5-year-old Miranda's arrows in pink. She chose the phoenix, which was used in the Games' closing ceremonies, because a phoenix never really dies. "When it gets old, a new one is born from the ashes," she said. Like the phoenix, her "Olympic journey will never die," but "it may change forms." She will always be an Olympian. 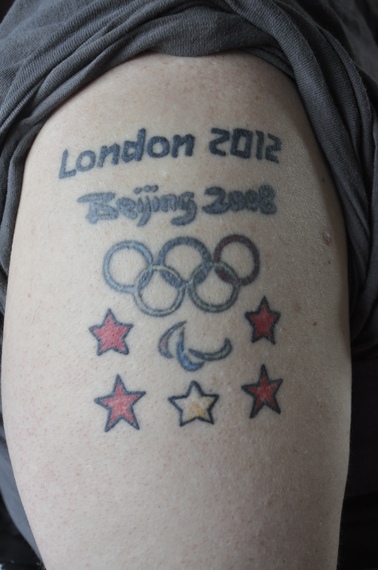 John Stubbs has been on the Great Britain Paralympic Squad since 1997, and is the current Double World Para-Archery Champion. He won gold in Beijing 2008 at the inaugural Games for compound archery.

Stubbs' tattoo highlights his participation in the London 2012 and Beijing 2008 Paralympics. His red stars stand for his World Championship gold medal, and the gold star for his Paralympic gold.

"The Agitos and Olympic rings together mean equality, because we all work very hard for the same goals," he said. His tattoo represents 20 years of archery training.

While he usually doesn't show his tattoo, he adds to it with each success, which helps keep him motivated. "We all have those down days when we're hard on ourselves, but I can use my tattoo to remind myself what I've achieved and it picks me up," he said.

Not everyone who gets an archery tattoo is an Olympian. All kinds of archers engrave their archery passion on their skin. 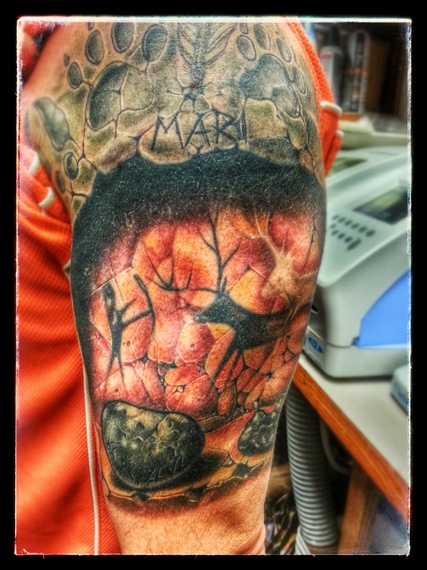 Chuck Cooley, National Field Archery Association (NFAA) touring pro, is known as a co-founder and vice president of Feather Visions. He has been the NFAA's announcer, and was a technical adviser for the recent NBC Sports TV reality show NockOut.

Chuck's tattoo mixes his personal history and spiritual connection to archery. His tattoo depicts a piece of cave art. It's supposed to appear as if you're looking through a hole in a cave wall and seeing the art.

The tattoo shows a bowhunter and two deer. The dark one represents all the stories and memories of a hunt, and the white one is his "spirit deer." The white deer has appeared to Cooley three times in his life, and only when he was hunting with his kids. The first time it appeared as a yearling after Cooley reconnected with his son on their first trip in the woods together after a multi-year separation. The second sighting came two years later while he was with his son and a friend. The third sighting came a season ago when he joined all three of his kids in the woods at the same time.

The rest of the tattoo depicts the footprints of each animal he has taken with a bow: bear, coyote, turkey and whitetail. It also features a flint-knapping stone and knapped broadheads sitting on a stone shelf, as if left by a cave-dwelling artist. The top-center tattoo shows an arrow stabbed into stone like Excalibur's sword. It bears his wife's name to symbolize their permanent bond. 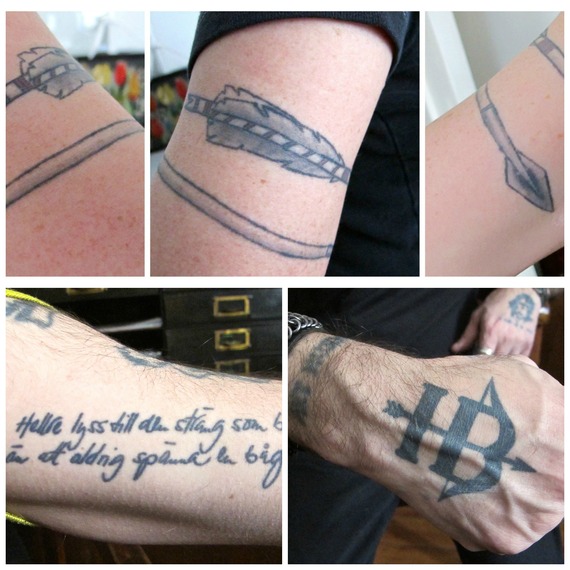 One of Capps' tattoos features the logo of his local club, the Hampstead Bowmen.

The other is a Swedish saying that presents archery as an allegory for life. It translates, "I'd rather listen to the sound of a bowstring breaking than never draw a bow!" Lind, Capps' partner and fellow club member, wouldn't be outdone. For her 50th birthday, she captured the magic and beauty of arrows with a tattoo of an arrow encircling her upper arm.

Compound Archers and Their Arrows 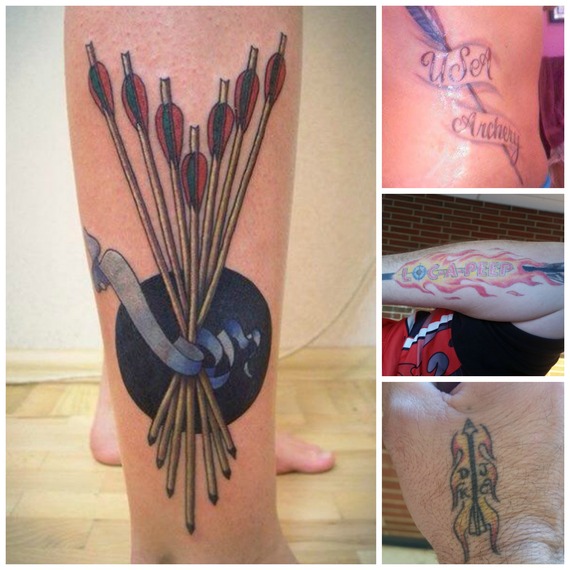 Arrows are a popular theme in archery tattoos. Kseniia Shkliar, a Ukrainian compound archer, sports a beautiful ribbon quiver on her leg to show her love of the sport and her seven years of competitive shooting. Stephanie Gallagher commemorated her years as a USA Archery team member and professional compound shooter with a lovely patriotic arrow.

Jon Bach, inventor/founder of Loc-A-Peep and coach/owner of X-Ring Archery in Lambertville, New Jersey, mixes his many loves with his tattoos. The first tattoo, an arrow, features his four children's initials. He says the "dot" in front of the arrow reminds him to "keep focused on the important things in life." The forearm arrow highlights the Loc-A-Peep logo and serves the dual purpose of advertising the peep sight he invented.

Do you wear ink to show your love of archery? If so, we'd love to see your photos in the comments section! If you're new to archery, and not sure where to get started, check out the Archery 360 store locator to find instruction and gear near you.

This article first appeared on Archery 360.