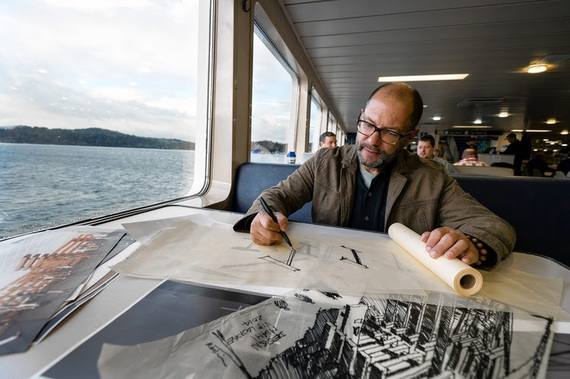 Alan Maskin is a principal architect at Seattle's Olson Kundig, the firm behind the iconic architecture of the Bezos Center for Innovation at MOHAI and other landmarks in the Pacific Northwest and beyond. After witnessing Maskin deliver a deeply moving presentation on the eroticism of architecture, I engaged him in a conversation about courtship, chemistry, and the parallels between dating and building relationships in the professional realm.

What overlaps do you see in courting a client and courting a romantic partner?

Obviously, in both instances, it is necessary to be out in the world. Neither romance nor a great new project or client will know how to find you sitting alone at home or in your design studio. The most useful skill in both arenas, in my opinion, is becoming better skilled at making friends. I was about as shy and insecure as they come and I had to really work at this. Like anything one wants to be better at, it required practice. I treated the idea of making friends and stepping out of my shell like one might treat a biology lab in school --I tried different approaches, studied people who were terrific at it, failed often and sometimes epically, and slowly got better at it.

Someone told me about research conducted at Stanford that actually quantified the average number of times one needs to make contact with someone before it leads to potential work, and I imagine the search for love and romance is similar. For me, it really was a numbers game.

You're a beautiful, smart man, Alan. What are examples of authentically romantic gestures? And the flip side, what is commonly thought as romantic, but which would you say are not?

(Well...the CEO of Siren just included an object lesson imbedded in her question. While I don't self-identify with the adjectives she attributed to me in the question above, it probably feels universally good to be openly admired and it doesn't happen often enough in our culture.)

For me, I was always a sucker for eye contact. When I was interested in someone, resisting the compulsion to look away became an indicator that we were leaving the realm of friendship in favor of a potential for romance.

What was courting like between you and your partner? What aspects continue 17 years later?

I trained my close friends to keep their eyes peeled for me. I asked them to keep me in mind if they met a great single guy who was open to meeting new people. I assured them it would be better to give me their contact info versus inviting us to dinner and "watching." A number of these didn't work out, and then one did.

Blind dates are usually a long shot. The geography was off -- I lived in a city, he lived hours away in a rural area. Our interests were off -- I worked at an architecture firm and he was a crustacean biologist. On the phone he seemed smart and funny and he had a great voice. At the end of the call I asked if he wanted to meet up and he replied he would be busy at work for three months. I interpreted his response as "....nah, no thanks", so I forgot about it. And then three months later, he calls.

We meet for lunch and he was clearly nervous. He rambled on and on about his fucked up childhood, lifelong friends, and hermaphroditic shrimp that experience a gender transition during the course of their lives. How did I not know this? There was a point when I noticed his lips moving... but all I could see were these deep blue Irish eyes and his Kirk Douglas chin. He was also hysterically funny -- and in my experience the funny people are also the smart people. "Sure...I'll drive out to visit you next weekend."

I drove for two hours, finally arriving at his house in the woods. We went for a hike and climbed down a steep bluff to an isolated beach near his house. As we walked I noticed a huge driftwood log that had washed up on the beach, except it wasn't a felled tree. It was a 35 foot long baby gray whale that had just died and washed ashore. My first instinct was to put both hands on the carcass. How often do you get the chance to touch a whale? It had skin that was supple, moist and perfectly smooth. In retrospect, it was an unintentionally cunning move to make on a date with a marine biologist. Long story short, I stayed the weekend. My general advice to single friends -- albeit metaphorically -- is when they reach a similar crossroad, they should touch the whale.

What I needed from romance in my twenties is very different from what I need now. I enjoyed being single and had worked out an existence that was really fun. It wasn't until I had given up on ever having a single long-term relationship that one showed up.

There are now many aspects of our life together that are so specific to one another. The ways we hold each other, the ways we view the future as a partnership and the ways we support one another's efforts and desires -- all of these things I experience with only one other person on the planet. It is safe to say that in this regard, my life exceeded whatever hopes and expectations I had when I was younger.

Do you consider "DTF" or "Netflix and Chill" some baseline for courtship? (I mean, at least the person asked??) If not, what do you think is up when someone sends that message to someone they don't know very well?

I have a hard time being too judgmental about overt invitations to "get horizontal" at the start of a romantic connection. There are men and women that thrive on these interactions -- and without question they can be easier to navigate than a traditional courtship. On the other hand, I now know many single people in a realm where immediate "hook up" culture is more the norm -- and these friends are genuinely struggling to find other options for romantic connections. What surprises and saddens me is how many friends in their thirties are giving up. It is one of the reasons I am excited about Siren. It is an option I would have used -- and particularly now that you are broadening the test groups and including the LGBT world.

What are your three Don't Do's you'd suggest during a getting-to-know-you phase, professional to romantic?

1. Narcissists are a complete buzz kill for me. It's the absence of curiosity about other people and other things that turns me off. If they haven't asked you a question after 20 minutes, start looking for the EXIT signs.

2. When I was dating I intentionally kept the bar pretty low to keep more options open -- but I recall a point when having a job, a driver's license, and health insurance became dating criteria. It was a way of separating the men from the boys, so to speak. Granted, a low bar, but I don't regret keeping it that open.

There were a series of dates I had with a very sexy mycology student. He left me a voice message inviting me to go with him to a "Fun Guy Festival," which sparked my imagination. I was surprised to find myself at the Fungi Festival, which turned out to be amazing. It was really fun while it lasted.

3. A long list of deal breakers is in itself a bad idea. The guy I have been with for 17 years surprised me in the most unexpected ways. I hate to think of what might have happened if I had ruled him out because of abstract criteria. One should obviously avoid abuse in any form, but the "opposites attract" cliché might have merit in some cases -- so why rule that out?

What are the key attributes to courtship? Can these be learned or is it mostly innate?

As I mentioned earlier, I really do think dating and getting good at it is a learned behavior. The learning is connected to trial and error, and practice. Treat it like an art form you want to master. You have to step over the voice in your head that says "I hate to date" and resist the dismissal of online dating -- especially now that Siren is making the landscape of romance more human and navigable.