Because architecture is cool.

Architecture isn't solely the interest of older generations; instead, it's a prime interest of millennials, student tourists, young explorers. Here are 10 of the most frequently visited works of architecture topping every young traveler's list. 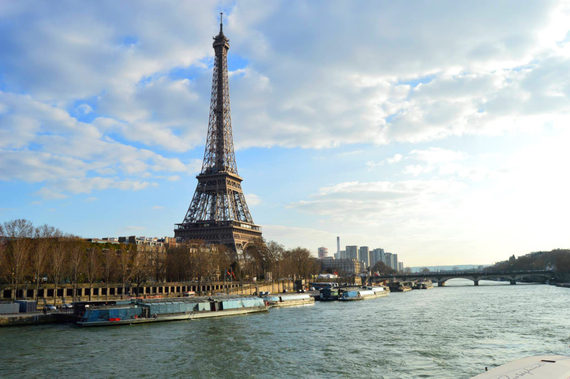 The Eiffel Tower is one of the world's most iconic works of architecture, making it a top attraction for young, wide-eyed travelers. Built for the 1889 World's Fair, the Eiffel Tower is a thousand-foot-high masterpiece of latticed wrought iron, nuts and bolts. All 7,300 tons of it's intricately designed frame has been hand- painted (and repainted) to remain looking shiny and new for generations of travelers to climb it's limbs. The Tower is open to the public 365 days a year and has 3 levels to explore. The transparent first floor is accessible by stairs and has resting areas, restaurants and an immersion show; the second floor has a champagne bar to toast to past, present and future adventures; and the jaw-dropping third floor has a picture-perfect, panoramic view of the city of love. It should come as no surprise that the top of the Eiffel Tower is the venue-of-choice for countless proposals and true loves first (french) kiss. 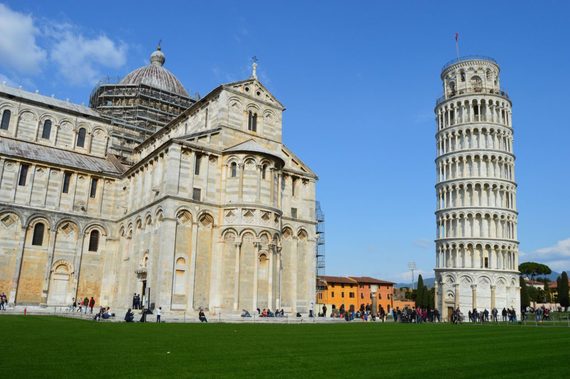 Built from 1173 until 1399 in the small Italian city of Pisa, the Leaning Tower of Pisa is a stunning, yet confusing work of architecture. Everyday young tourists hop on the train from Florence to Pisa to find out one thing and one thing only... why is the leaning tower... leaning? The fact is, it wasn't designed to be a leaning tower. During the bell tower's creation, it began to angle to the side a little, and then a little more, and then a lot. To prevent the tower from leaning to the point of its collapse, architects brainstormed ways to stop its frame from slanting. They decided upon curving the frame of the tower--and it worked! Today, tourists can still climb the 251 steps to the top of the pure-white tower and peer down over the city. 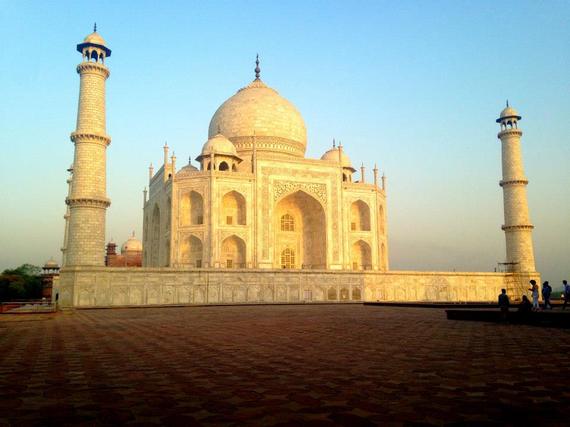 The Taj Mahal is an Indo-Islamic architectural masterpiece that remains the ultimate monument of love. The Taj Mahal was built by the fifth Mughal Emperor, Shah Jahan, to commemorate the life of his third wife, Mumtaz Mahal. Mumtaz Mahal, died after giving birth to her thirteenth child. Immediately after her death, Shah Jahan began planning the design for an appropriate mausoleum for his wife to be buried in. It took 22 years for the structure to be complete, but in 1648 AD, the marvelous Taj Mahal was finished and Mumtaz Mahal's body was relocated to the royal tomb inside.

The Taj Mahal is one of the biggest wonders of the world, as it is a colossal, symmetrical, white marble mosque dating back to the 17th century. Surrounding the Taj are magnificent gardens and leading up to the structure are two large walkways and a long, reflection pool. Though it is still a mystery who designed the structure, it is known that over 20,000 workers built it. Its pure beauty and historical reputation for true love are what make the Taj Mahal a young traveler's dream destination. 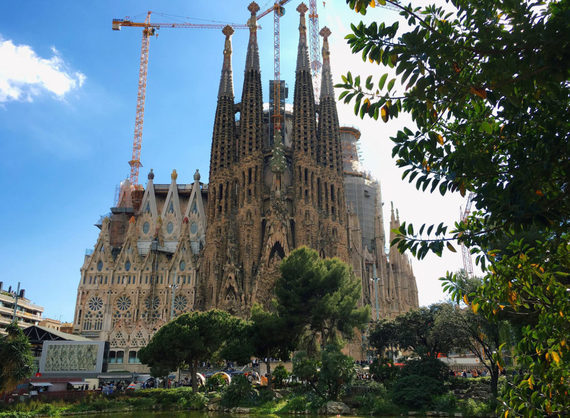 Designed by Spanish architect Antoni Gaudi, La Sagrada Familia's remarkable frame is as majestic as it is massive. This architectural masterpiece is deservingly the most visited monument in Spain, displaying four sides of complex stonework and hand-painted brilliance. The cathedral has two sides that are all-but-complete--the Nativity Façade and the Passion Façade--which visitors from all over the world come to admire. The Nativity Façade, built by Antoni Gaudi from 1882 up until his death in 1926, is made of four enormous bell towers and the portico. The portico is composed of three sections, each representing the Christian virtues faith, hope and charity. The Passion Façade was recently constructed and is equally incredible, representing the passion and death of Jesus Christ.

Though the exterior of the cathedral is what most young travelers come to see, the interior is even more breath taking. The stained glass windows cast shards of florescent blue, green, orange and red light onto the alter and the ceiling is composed of tree-shaped stone, making the acoustics come alive. 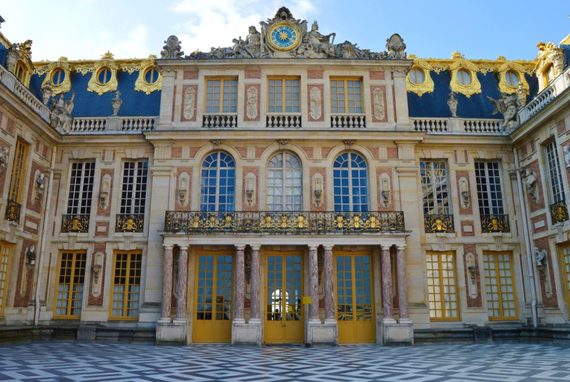 Only 10 miles southwest of Paris is the Palace of Versailles. This UNESCO World Heritage site was initially built in 1631 as a chateau hunting lodge for King Louis XIII. When King Louis XIV took over the kingdom in 1682, he transformed the small chateau into the enormous royal palace that it is today. The Palace encompasses north and south wings, an ornately decorated grand hall (The Hall of Mirrors), the King's grand apartments, gold-plated dining halls and rooms filled with extraordinary French art; the palace truly embodies everything rich, precious and exquisite. Placed directly behind the palace is a maze of perfectly-kept gardens, with majestic sculptures, fountains and ponds. The allure of the palace's rich history and opulent features entices young travelers to delve into old French royalty and walk the palace halls like Marie-Antoinette. 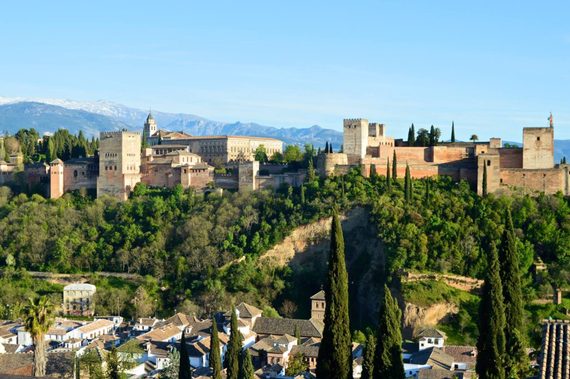 The Alhambra is Granada's most famous work of Islamic architecture and most visited tourist attraction. The medieval palace was born in 889AD when a small military fortress was built atop hill al-Sabika on Roman ruins. It wasn't until the 13th century, when moorish emir Mohammed ben Al-hamar arrived, that the fortress was reconstructed into the royal palace that remains today. The Alhambra is complied of 5 major sections, each of which are unique in form and beauty.

The Nasrid Palace is the hardest section to get tickets for and is made up of three independent areas: the Mexuar, the Comares Palace and the Palace of the Lions. To get tickets for the Nasrid Palace, tourists must wait in line early in the morning or reserve tickets months before their arrival date. The Medina is the second section of the Alhambra and is a citadel with public baths, ovens, workshops and silos. The Medina was home to top government officials, court servants and employees. Alcazaba is the third section and is an old military area that contains a large watchtower. The views from the watchtower are incredible--as it's possible to see the entire city of Granada, as well as the Sierra Nevada mountains. Generalife is the fourth section of the Alhambra and is a gorgeous villa surrounded by colorful gardens and orchards. The last section of the Alhambra is the Palace of Charles V, which is a small, white palace that is free and open to the public year round. 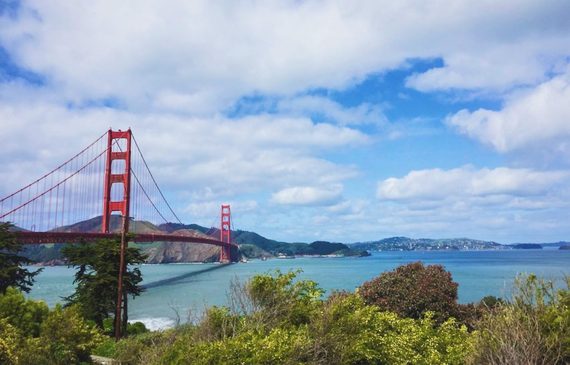 Straddling 1.7 miles of the misty Golden Gate straight, the Golden Gate Bridge is one of the seven wonders of the modern world. The record-breaking suspension bridge was designed by Joseph Baerman Strauss to brave the elements--as it was built during extreme fog, blistery winds and rough tides. Luckily, it only took four years to complete the bridge and connect San Francisco to Marion County.

The Golden Gate Bridge was the first of its kind, allowing 5 lanes of traffic, as well as pedestrians and bicyclists, to pass beneath its strong, wide suspensions. Nevertheless, it's not the immensity of the bridge that makes it so iconic; instead, it's the beauty of its hand-painted, orange frame against California's rocky waters and blue skies. Tourists line up on either side of the bridge to get a once-in-a-lifetime snapshot of this excellent work of architecture. 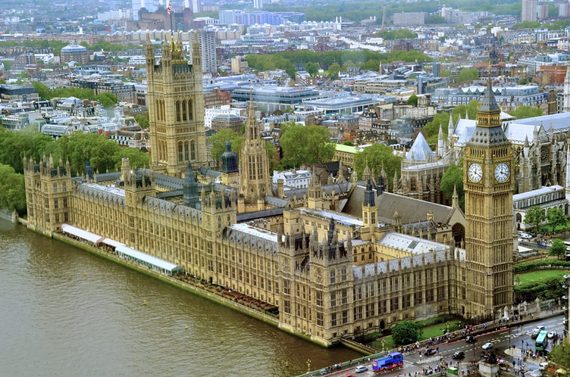 The Palace of Westminster

Perched on the bank of the Thames, the Palace of Westminster symbolizes Great Britain's past, present and future. The story of the palace begins with the Old Palace--a medieval fortress built by William II in 1097. The Old Palace was home to decades of royal Kings, Queens, Princes and Princesses, up until the year 1500 when it became the meeting place for Great Britain's Courts of Law and later the British Parliament.

Though the Old Palace's medieval presence is still alive in today's modern structure, the Old Palace is not the palace that exists at present. Destroyed by a fire in 1837, the Old Palace was replaced by the New Palace--a massive structure encompassing 1,100 rooms, 2 courtyards and the magnificent Big Ben clock tower. Architect Sir Charles Barry was the creator of the New Palace, and though he died before the palace was complete, he'd be pleased to know that his architecture is London's most famous icon and that Big Ben has been stealing the hearts of young travelers since 1859. 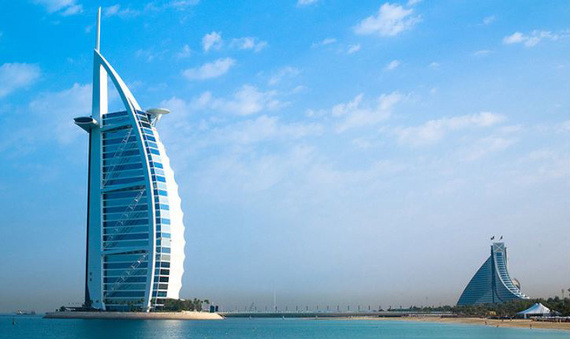 The Burj Al Arab is a stunning hotel, a symbol of modern Dubai and an architectural feat. Built from 1994 to 1999, the Burj Al Arab is the third tallest hotel in the world and possibly the most luxurious hotel ever. The gleaming structure stands on an artificial island off of the coast of Dubai, and looks like a giant glass sail. The building was designed by consultancy group, Atkins, and was led by head designer Tom Wright. It took over 2,000 construction workers and five years to create the building, but it was definitely worth the effort.

Today, the Burj Al Arab hotel is known as the only 7-star hotel in the world--with incredibly lavish rooms, restaurants and accommodations. Though young travelers don't typically stay in the hotel (costs are up to 30,000$ a night), people come from across the world to get a glance of the sail-shaped masterpiece. 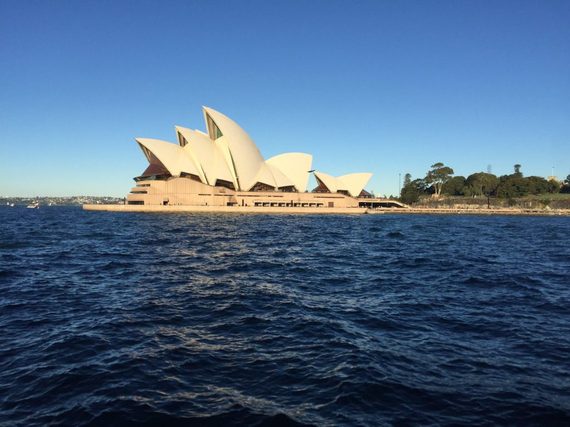 The Sydney Opera House is Australia's most distinctive work of architecture and most visited landmark. The planning of the Opera House began in the 1940s, when Eugene Goossens, the Director of the NSW State Conservatorium of Music, decided that Australia needed a larger venue for theater. Years later, in 1955, Goossens held an international design competition with more than 230 contestants from 32 different countries. Danish architect, Jorn Utzon, came out on top. With no time to waste, construction began in 1958 and was completed in 3 stages. The first stage was the upper podium; the second, the two outer shells; and the third, the interior design and construction. Fifteen years and 102 Million dollars later, the expressionist building encompassed a concert hall, two theatres, a studio, an outdoor forecourt, a recording studio, a playhouse, a party venue, bars, restaurants, retail stores and cafes.

The Sydney Opera House is a one-of-a-kind, multi-venue performing arts center that provides tourists with endless activity. It's no wonder that 1.2 million travelers visit the Opera House every year.